The good news – our Democratic-controlled State House brought HB 1059 (the “schools levy cliff” bill preventing $358 million in funding cuts to Washington schools) to the floor for a vote and… it passed!
The bad news – the bill now moves to the Republican-controlled State Senate.
We’re calling on Senate Republicans to do the right thing and fund our schools. Add your name now!
Republican Senators killed this same bill last year. And the voters of Washington sent Republican Senator Steve Litzow home for it, replacing him with Democratic Senator Lisa Wellman, an education champion.
Add your name and tell Senate Republicans to stop putting our schools at risk.
If you read our email updates last week, you know that Senate Republicans are refusing to even acknowledge that school funding is an issue. Despite having 7,000 activists stand last week on the capitol steps advocating for school funding, Republicans seem to think our students and teachers are not a priority.
We have to keep the pressure on. Will you help us?
Erin Douglass

Last Saturday, millions of us poured into the streets from Barrow, Alaska, to Washington, D.C., to Tallahassee, Florida at the Women’s Marches. I myself was proud to march with my family in our nation’s capitol. Our display of unity showed the world how powerful we are when we rise up together.

Now, Donald Trump is lashing out against values held by the majority of people in this country – and against families just like mine.

Reports are that in the next few days Trump will sign another order attacking refugees – people fleeing war and seeking protection. This order will likely include what amounts to a Muslim ban. People needing refuge will be turned away because of Trump’s fear and hatred.

Will you join me in taking a “Solidarity Selfie” and letting the world know we reject Trump’s fearmongering?

Years ago, my family immigrated here from Iran and we’ve been happy to call the U.S. our home ever since. If Trump’s ban on Muslims had been in place, my family would have never made it here.

Like all bullies, Trump is a coward. He attacks those who are most vulnerable, thinking no one will stand up for them. But he’s wrong. The country will stand for hope not fear, and I know you will stand with us to say no to Trump’s border wall, refugee ban and discrimination against Muslims.

Speak out by sharing a “Solidarity Selfie” today on social media:

You can see some samples of #SolidaritySelfies on Twitter.

The summary below was written by the Congressional Research Service, which is a nonpartisan division of the Library of Congress, and was published on Jan 17, 2017.

This bill declares that: (1) the right to life guaranteed by the Constitution is vested in each human and is a person’s most fundamental right; (2) each human life begins with fertilization, cloning, or its equivalent, at which time every human has all the legal and constitutional attributes and privileges of personhood; and (3) Congress, each state, the District of Columbia, and each U.S. territory have the authority to protect all human lives.

To provide that human life shall be deemed to begin with fertilization.

This Act may be cited as the Sanctity of Human Life Act.

the Congress declares that—

the right to life guaranteed by the Constitution is vested in each human being, and is the paramount and most fundamental right of a person; and

the life of each human being begins with fertilization, cloning, or its functional equivalent, irrespective of sex, health, function or disability, defect, stage of biological development, or condition of dependency, at which time every human being shall have all the legal and constitutional attributes and privileges of personhood; and

the Congress affirms that the Congress, each State, the District of Columbia, and all United States territories have the authority to protect the lives of all human beings residing in its respective jurisdictions.

For purposes of this Act:

The term fertilization means the process of a human spermatozoan penetrating the cell membrane of a human oocyte to create a human zygote, a one-celled human embryo, which is a new unique human being.

The term cloning means the process called somatic cell nuclear transfer, that combines an enucleated egg and the nucleus of a somatic cell to make a human embryo.

The terms human and human being include each and every member of the species homo sapiens at all stages of life, beginning with the earliest stage of development, created by the process of fertilization, cloning, or its functional equivalent. 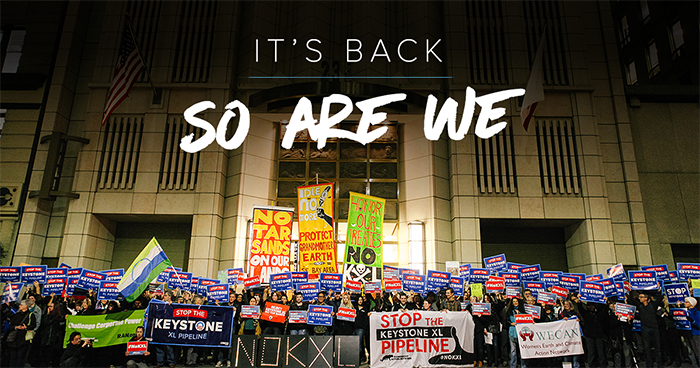 Today, we are announcing our plan to resist his dangerous fossil fuel agenda.

Will you join us? Click here to take the pledge of pipeline resistance.
Through peaceful direct action and civil disobedience, we are pledging to disrupt the construction and financing of dirty pipeline projects. We are delivering the petition you signed asking banks to defund the Dakota Access Pipeline with thousands of names next week. If we’re going to stop these pipelines, we will need your help

Rainforest Action Network has a 30-year history of fighting for people and planet through peaceful direct action. We helped organize the KXL Pledge of Resistance, mobilizing nearly 100,000 people like you and training more than 3,000 participants across the country in 38 states to stop the pipelines using civil disobedience.

You took the original KXL Pledge of Resistance, and with your help we stopped climate-killing pipelines. Together, we can do it again.

Are you ready to take direct action? Click here to let us know.

Donald Trump’s agenda is incredibly dangerous. His first week in office is not even over and he’s already launched attacks on the environment, on Indigenous rights, on immigrants, on voting rights, on free speech, and on scientific facts. He has named the wealthiest cabinet in U.S. history, filled with corporate advocates who are looking to increase corporate profits and corporate power — including naming the CEO of ExxonMobil, the country’s largest oil company, to be the Secretary of State.

We have already seen millions of people mobilized to resist the new administration’s policies. If you are ready to turn anger into action, we have the strategy, we have the infrastructure, and we have the history and commitment to make change happen.

We need your help.

Join us today and Sign the Pipeline Pledge of Resistance.