1471 – King Henry VI was killed in the tower of London. Edward IV took the throne.

1536 – The Reformation was officially adopted in Geneva, Switzerland.

1542 – Hernando de Soto died along the Mississippi River while searching for gold.

1819 – Bicycles were first seen in the U.S. in New York City. They were originally known as “swift walkers.”

1832 – In the U.S., the Democratic Party held its first national convention.

1881 – The American branch of the Red Cross was founded by Clara Barton.

1891 – Peter Jackson and Jim Corbett fought for 61 rounds only to end in a draw.

1922 – The cartoon, “On the Road to Moscow,” by Rollin Kirby won a Pulitzer Prize. It was the first cartoon awarded the Pulitzer.

1924 – Fourteen-year-old Bobby Franks was murdered in a “thrill killing” committed by Nathan Leopold Jr. and Richard Loeb. The killers were students at the University of Chicago.

1927 – Charles A. Lindberg completed the first solo nonstop airplane flight across the Atlantic Ocean. The trip began May 20.

1929 – The first automatic electric stock quotation board was used by Sutro and Company of New York City.

1934 – Oskaloosa, IA, became the first city in the U.S. to fingerprint all of its citizens.

1947 – Joe DiMaggio and five of his New York Yankee teammates were fined $100 because they had not fulfilled contract requirements to do promotional duties for the team.

1956 – The U.S. exploded the first airborne hydrogen bomb in the Pacific Ocean over Bikini Atoll.

1968 – The nuclear-powered U.S. submarine Scorpion, with 99 men aboard, was last heard from. The remains of the sub were later found on the ocean floor 400 miles southwest of the Azores.

1970 – The National Guard was mobilized to quell disturbances at Ohio State University.

1982 – The British landed in the Falkland Islands and fighting began.

1991 – In Madras, India, the former prime minister, Rajiv Gandhi was killed by a bouquet of flowers that contained a bomb.

1998 – An expelled student, Kipland Kinkel, in Springfield, OR, killed 2 people and wounded 25 others with a semi-automatic rifle. Police also discovered that the boy had killed his parents before the rampage.  Additional info …this teen was mentally ill

1998 – Microsoft and Sega announced that they are collaborating on a home video game system.

1998 – In Miami, FL, five abortion clinics were hit by an butyric acid-attacker.

Despite millions of people calling for the FCC to protect the open internet the FCC commission voted to move forward on repealing net neutrality protections. This process will last several months so we still have time to stop them!
Let’s show them the power of the internet. Sign the petition to tell the FCC: stay strong on net neutrality!
The future of the free and open internet is doomed if we don’t stand together and fight back.
Add your name today!

“The internet is the repository of all human knowledge—and goats singing Taylor Swift songs,” said John Oliver on his “Last Week Tonight” show this weekend. Oliver pleaded with his viewers to flood the FCC with comments to protect consumers’ rights to a free and open internet, and I am with him.Why? Because it’s true. The internet is a great place for many things—from animal videos to news and education to small business startups and our economy as we know it — we can’t afford to let FCC Chairman Ajit Pai’s roll back Obama-era net neutrality protections.

Net neutrality protects our ability to access the content we want on the internet – and we must stand up for it.

Net neutrality keeps internet service providers from picking and choosing the speed and content you can access based on big corporations’ spending. It’s about protecting consumers’ ability to access affordable high-speed internet – which is especially critical for low-income families.

Last time we won net neutrality protections because millions of Americans made their voices heard. We have to do it again. The internet needs us.

Trump is once again putting the powerful ahead of ordinary Americans. His administration is allowing the FCC to give big corporations what they ask for — even if it hurts consumers.

The open internet is our platform for free speech, education, and innovation. John Oliver and I agree – everyone needs to stand together and protect it.

Raise your voice with us! 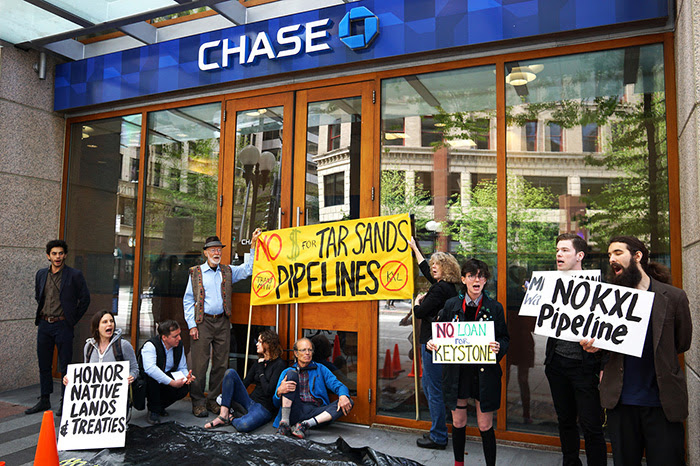 Tell Banks to Say No to Tar Sands: More than 120 First Nations and Tribes have signed a treaty opposing all tar sands pipelines — one of the dirtiest forms of oil on the planet!

Tell Banks to Say No to Human Rights Abuses: The conflict over the Dakota Access pipeline resulted in despicable violence and abuses — and these will continue as communities fight for their clean air and clean water.

Tell Banks to Say No to Indigenous Rights Violations: These projects continue the shameful history of trampling on Indigenous land rights and broken promises.

We need your voice — today. Tell JPMorgan Chase that you expect banks to live up to their commitments to Indigenous rights and the environment.

For people and planet,