Demand the process  be done by the book

Betsy DeVos selected Candice Jackson to be the acting head of the Department of Education’s Office of Civil Rights, circumventing the Senate’s confirmation process by choosing her to be the deputy assistant secretary of the office and not yet nominating someone to head the department. Jackson is an outspoken anti-feminist who claimed that she faced racial discrimination as a white woman at Stanford.

The Office of Civil rights at the DoE has the mission of protecting students from discrimination on the grounds of race, gender, age, and ability. Looking at Jackson’s history, she’s a terrible pick to be heading up this department. While at Stanford, in addition to contending that she was discriminated against, she wrote passionately against affirmative action for students of color. In the same publication, the Stanford Review, she wrote a different article promoting conservativism over feminism. And while she has advocated for victims of sexual assault in the past, she cast aspersions against the women who bravely came out and said that they were assaulted by Donald Trump. 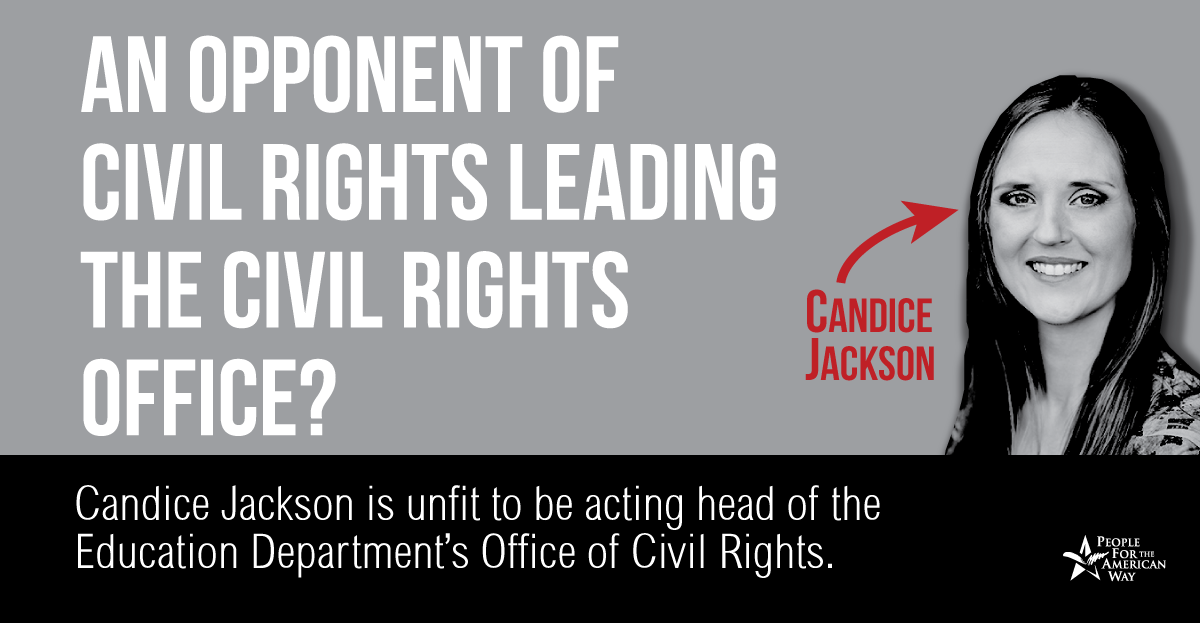 In her book about the women who accused Former President Bill Clinton of assault, Jackson also criticized sexual harassment laws and said that they forced men to “self-censor themselves to avoid being accused of sexual harassment,” all the while ignoring Trump’s comments about non-consensual groping of women. Someone who believes that men should not have to “self-censor” those types of comments or actions is not someone who should be anywhere near a department that looks out for the civil rights of all students.

Sign the petition — Betsy DeVos should remove Candice Jackson from the Office of Civil Rights and appoint someone who will advocate for all students.

With her anti-affirmative action history and claims that she faced anti-white discrimination, Jackson is clearly ill-equipped to ensure equal access to education. She’s just once more piece of the dangerous team that the Trump administration is putting together — a team that is hostile toward the very offices they are supposed to represent. The Office of Civil Rights needs to be headed by someone who will advocate for every student and not project a political agenda onto the department.

Demand Candice Jackson be removed from her post now>>

Eventbrite is selling tickets to events for hate groups. 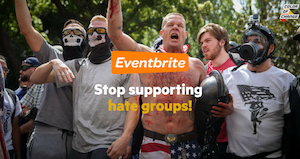 Tell Eventbrite to stop supporting and profiting from hate groups.

Eventbrite – the world’s largest platform for selling event tickets – has a hate group problem. Eventbrite is making tens of thousands of dollars a year selling tickets to events hosted by hate groups and featuring enablers of white supremacy like Milo Yiannopoulos and Richard Spencer.

Just this past Saturday, white nationalists hosted a sold-out gala featuring some of the biggest names in the white nationalist movement. Tickets to the event were sold on Eventbrite for as much $1,500 each. For a similar event hosted last year by white nationalists, Eventbrite made upwards of $100,000. The event page hosted by Eventbrite even contained a cartoon image of Trump making a hand gesture that is increasingly being used as a white supremacist symbol.

Despite having met with their leadership and bringing this problem to their attention multiple times, Eventbrite continues to fail to take action that ensures their platform is not used to spread and fund hate, all while CEO Julia Hartz talks openly about being a people-centered company. If Eventbrite truly cares about people, then why do they continue to promote and profit from groups and individuals whose rhetoric are explicitly tied to the rise in violent hate crimes?

When white supremacists – and the people who cater to them – use a platform like Eventbrite’s to elevate their hateful and violent ideas they create tangible dangers for our people. These hate groups and their leaders are not just shock-jock provocateurs looking to get a rise out of people by ‘offending’ them; they are actively painting a target on the backs of our communities and teaching their audiences how to harass vulnerable people.

While Eventbrite’s relative profit from these hate groups is practically peanuts, these groups are using the money raised off of Eventbrite to indoctrinate people into their hateful ideologies, spread propaganda that promotes damaging lies about marginalized groups and even to train and deploy an army of white nationalist that travel around the country to harass people of color. And in the case of Gavin McInnes, one of Saturday’s featured speakers, to organize an “alt-right” paramilitary group whose goal is to physically assault people protesting against Trump and the far-right.1 Groups like McInnes’ are clearly meant to intimidate and harm people of color, so why won’t Eventbrite do the right thing and stop profiting off of hate?

Eventbrite needs to make sure its platform is not profiting from hate groups or giving them a megaphone to stir up racial fear and push damaging falsehoods and distortions about Black communities.

0558 – The dome of the church of St. Sophia in Constantinople collapsed. It was immediately rebuilt as ordered by Justinian.

1274 – The Second Council of Lyons opened in France to regulate the election of the pope.

1429 – The English siege of Orleans was broken by Joan of Arc.

1525 – The German peasants’ revolt was crushed by the ruling class and church.

1663 – The first Theatre Royal was opened in London.

1763 – Indian chief Pontiac began all out war on the British in New York.

1847 – The AMA (American Medical Association) was organized in Philadelphia, PA.

1912 – The first airplane equipped with a machine gun flew over College Park, MD.

1926 – A U.S. report showed that one-third of the nation’s exports were motors.

1939 – Germany and Italy announced a military and political alliance known as the Rome-Berlin Axis.

1942 – In the Battle of the Coral Sea, Japanese and American navies attacked each other with carrier planes. It was the first time in the history of naval warfare where two enemy fleets fought without seeing each other.

1951 – Russia was admitted to participate in the 1952 Olympic Games by the International Olympic Committee.

1954 – French Colonial Forces surrendered to the Vietminh at Dien Bien Phu after 55 days of fighting.

1954 – The United States and the United Kingdom rejected the Soviet Union’s bid to join NATO.

1984 – A $180 million out-of-court settlement was announced in the Agent Orange class-action suit brought by Vietnam veterans who claimed they had suffered injury from exposure to the defoliant while serving in the armed forces.

1992 – A 203-year-old proposed constitutional amendment barring the U.S. Congress from giving itself a midterm pay raise was ratified as the 27th Amendment.

1994 – The Edvard Munch painting “The Scream” was recovered after being stolen 3 months earlier from an Oslo Museum. This version of “The Scream”, one of four different versions, was painted on paper.

1996 – The trial of Serbian police officer Dusan Tadic opened in the Netherlands. He was later convicted on murder-torture charges and was sentenced to 20 years in prison.

1997 – A report released by the U.S. government said that Switzerland provided Nazi Germany with equipment and credit during World War II. Germany exchanged for gold what had been plundered or stolen. Switzerland did not comply with postwar agreements to return the gold.

1998 – Daimler-Benz bought Chrysler Corp. for close to $40 billion. It was the largest industrial merger on record.

1998 – Residents of London voted to elect their own mayor for the first time in history. The vote would take place in May 2000.

1999 – A jury ruled that “The Jenny Jones Show” and Warner Bros. were liable in the shooting death of Scott Amedure. He was killed by another guest on the show. The jury’s award was $25 million.

1999 – Jerry Moss received a star on the Hollywood Walk of Fame.

1999 – In Belgrade, Yugoslavia, three Chinese citizens were killed and 20 were wounded when a NATO plane mistakenly bombed the Chinese embassy.

1999 – In Guinea-Bissau, the government of President João Bernardo Vieira was ousted in a military coup.

2003 – In Washington, DC, General Motors Corp. delivered six fuel cell vehicles to Capitol Hill for lawmakers and others to test drive during the next two years.

2003 – Roger Moore collapsed during a matinee performance of the Broadway comedy “The Play What I Wrote.” He finished the show after a 10-minute break. He was fitted with a pacemaker the following day.