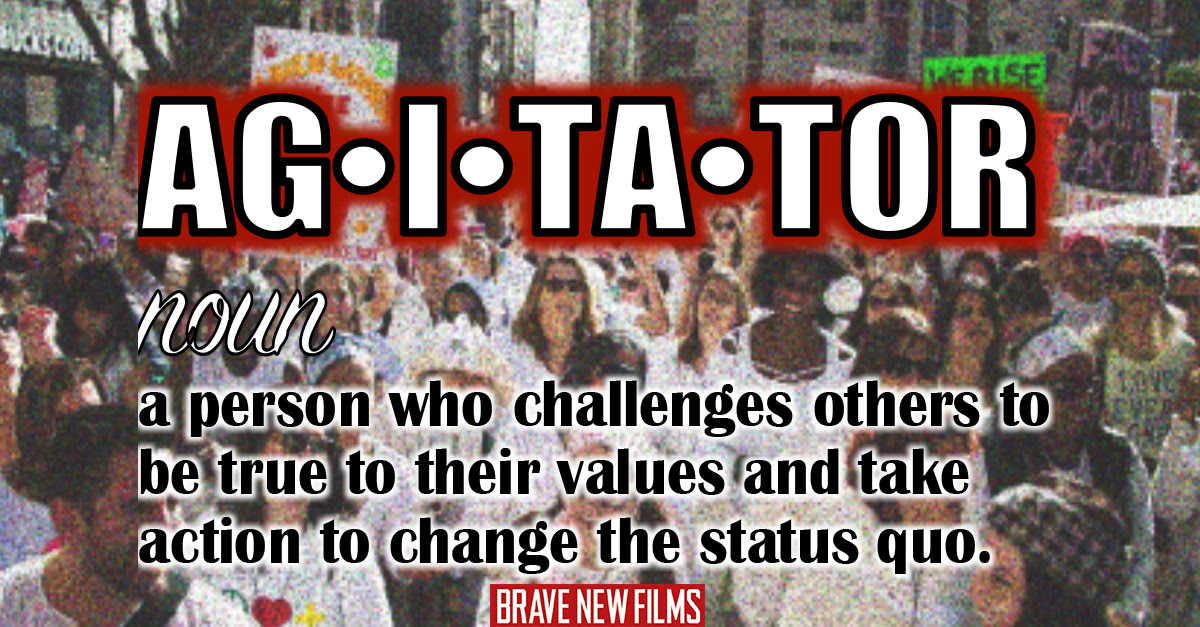 Will you invest in our content by becoming a Brave New Films Agitator and subscribing with a monthly donation of $10 right now? Together we’re building a community of monthly donors using film to agitate audiences to action.

Four years ago this Monday, fast food workers with Working Washington walked out on strike for $15/hour. A year later we walked into history when the Seattle City Council passed the nation’s first citywide $15 minimum wage law.

From minimum wage and sick days to secure scheduling and paid family leave, when workers organize, speak out, and take action, we can change what’s possible. Invest in the next big breakthrough wins for workers — contribute to Working Washington today.

0017 – Germanicus of Rome celebrated his victory over the Germans.

1328 – William of Ockham was forced to flee from Avignon by Pope John XXII.

1521 – Martin Luther was banned by the Edict of Worms because of his religious beliefs and writings.

1647 – A new law banned Catholic priests from the colony of Massachusetts. The penalty was banishment or death for a second offense.

1660 – King Charles II of England landed at Dover after being exiled for nine years.

1670 – A treaty was signed in secret in Dover, England, between Charles II and Louis XIV ending the hostilities between them.

1691 – Jacob Leiser, leader of the popular uprising in support of William and Mary’s accession to the English throne, was executed for treason.

1736 – The British and Chickasaw Indians defeated the French at the Battle of Ackia.

1791 – The French Assembly forced King Louis XVI to hand over the crown and state assets.

1805 – Napoleon Bonaparte was crowned King of Italy in Milan Cathedral.

1831 – Russians defeated the Poles at battle of Ostrolenska.

1835 – A resolution was passed in the U.S. Congress stating that Congress has no authority over state slavery laws.

1836 – The U.S. House of Representatives adopted what has been called the Gag Rule.

1864 – The Territory of Montana was organized.

1865 – Arrangements were made in New Orleans for the surrender of Confederate forces west of the Mississippi.

1868 – U.S. President Andrew Johnson was acquitted, by one vote, of all charges in his impeachment trial.

1896 – The Dow Jones Industrial Average appeared for the first time in the “Wall Street Journal.”

1908 – In Persia, the first oil strike was made in the Middle East.

1938 – The House Committee on Un-American Activities began its work of searching for subversives in the United States.

1940 – The evacuation of Allied troops from Dunkirk, France, began during World War II.

1948 – The U.S. Congress passed Public Law 557 which permanently established the Civil Air Patrol as the Auxiliary of the new U.S. Air Force.

1959 – The word “Frisbee” became a registered trademark of Wham-O.

1961 – A U.S. Air Force bomber flew across the Atlantic in a record time of just over three hours.

1969 – The Apollo 10 astronauts returned to Earth after a successful eight-day dress rehearsal for the first manned moon landing.

1972 – The Strategic Arms Limitation Treaty (SALT I) was signed by the U.S. and USSR. The short-term agreement put a freeze on the testing and deployment of intercontinental and submarine-launched ballistic missiles for a 5-year period.

1978 – The first legal casino in the Eastern U.S. opened in Atlantic City, NJ.

1987 – Sri Lanka launched Operation Liberation. It was an offensive against the Tamil rebellion in Jaffra.

1994 – U.S. President Clinton renewed trade privileges for China, and announced that his administration would no longer link China’s trade status with its human rights record.

1998 – The U.S. Supreme Court ruled that Ellis Island was mainly in New Jersey, not New York.

1998 – The U.S. Supreme Court ruled that police officers in high-speed chases are liable for bystander injuries only if their “actions shock the conscience.”

1998 – The Grand Princess cruise ship made its inaugural cruise. The ship measured 109,000 tons and cost approximately $450 million, making it the largest and most expensive cruise ship ever built.

The CBO score confirmed what we knew all along: Trumpcare will take health care away from millions of Americans. Now the fight has moved to the Senate. Demand that your Senator take this Hippocratic oath promising to do no harm to the American health care system.