1770 – The first shipment of rhubarb was sent to the United States from London.

1805 – The Michigan Territory was created.

1861 – Alabama seceded from the United States.

1867 – Benito Juarez returned to the Mexican presidency, following the withdrawal of French troops and the execution of Emperor Maximilian.

1878 – In New York, milk was delivered in glass bottles for the first time by Alexander Campbell.

1902 – “Popular Mechanics” magazine was published for the first time.

1913 – The first sedan-type car was unveiled at the National Automobile Show in New York City. The car was manufactured by the Hudson Motor Company.

1922 – At Toronto General Hospital, Leonard Thompson became the first person to be successfully treated with insulin.

1938 – In Limerick, ME, Frances Moulton assumed her duties as the first woman bank president.

1958 – “Seahunt” debuted on CBS-TV. The show was aired on the network for four years.

1973 – Owners of American League baseball teams voted to adopt the designated-hitter rule on a trial basis.

1977 – France released Abu Daoud, a Palestinian suspected of involvement in the massacre of Israeli athletes at the 1972 Munich Olympics.

1978 – Two Soviet cosmonauts aboard the Soyuz 27 capsule linked up with the Salyut 6 orbiting space station, where the Soyuz 26 capsule was already docked.

1980 – Nigel Short, age 14, from Bolton in Britain, became the youngest International Master in the history of chess.

1986 – Author James Clavell signed a 5$ million deal with Morrow/Avon Publishing for the book “Whirlwind”. The book is a 2,000 page novel.

1991 – An auction of silver and paintings that had been acquired by the late Ferdinand Marcos and his wife, Imelda, brought in a total of $20.29 million at Christie’s in New York.

2000 – The merger between AOL and Time Warner was approved by the U.S. government with restrictions.

2000 – The U.S. Postal Service unveiled the second Vietnam Veterans Memorial commemorative stamp in a ceremony at The Wall.

2001 – The Texas Board of Criminal Justice released a review of the escape of the “Texas 7.” It stated that prison staff missed critical opportunities to prevent the escape by ignoring a fire alarm, not reporting unsupervised inmates and not demanding proper identification from inmates.

It set the date for the Presidential Inauguration as January 20th, instead of the old date of March 4th. It also sets January 3rd as the official opening date of Congress.

On February 6 National Lame Duck Day recognizes the ratification of the 20th Amendment to the United States Constitution or the Lame Duck Amendment.

The term “lame duck” originated as a description of stockbrokers in 1700s England who could not pay off their debts. The name later carried over to those in business who, while known to be bankrupt, would continue to do business.

In politics, a lame duck is a person currently holding a political office who has either: lost a re-election bid chosen not to seek another term been prevented from running for re-election due to a term limit holds a position that has been eliminated
The 20th Amendment
Prior to the ratification of the 20th Amendment to the United States Constitution, there was for Congress a 13-month delay between election day and the day the newly elected officials took office. In the case of a lame duck, this was a 13 month notice his or her job was terminating crippling their influence. Hence the ‘lame’ or injured duck.
An awful lot of people are confused as to just what is meant by a lame-duck Congress. It’s like where some fellows worked for you and their work wasn’t satisfactory and you let ’em out, but after you fired ’em, you let ’em stay long enough so they could burn your house down. – Will Rogers

The same applied to the president. The 20th Amendment changed the date the newly elected president took office from March 4th to January 20th.

During a lame-duck session, members of Congress are no longer accountable to their constituents. It is possible for their focus to switch to more personal gain instead of acting on behalf of their constituents with an eye toward re-election.

The 20th Amendment shortened this period from 13 months to 2 months. While lame-duck sessions still occur (20 such sessions have occurred since the amendment took effect in 1935), there is less time for sweeping legislation to be approved. Even so, lame-duck Congresses have declared war, impeached a president, censured a senator, and passed the Homeland Security Act among other actions.
It is also considered a time when the peaceful transition of power occurs. Preparations take place for the out-going president to leave the office and the newly elected president to take over the role.

E. Howard Hunt, the leader of the seven Watergate burglars (see 2:30 a.m.June 17, 1972) currently on trial, tells fellow burglars Frank Sturgis, Virgilio Gonzalez, Eugenio Martinez, and Bernard Barker (sometimes called the “Cubans”) that if they plead guilty and keep their mouths shut, the White House will financially take care of their families. Hunt will plead guilty the next day; the others will plead guilty days later (see January 8-11, 1973). [Spartacus Schoolnet, 8/2007] Hunt has been pressuring the White House for executive clemency—in essence, a presidential pardon—for himself in return for his and the burglars’ guilty pleas and subsequent silence. [Reeves, 2001, pp. 557-558] Watergate burglar Bernard Barker will write of the decision to plead guilty in October 1974. He will recall Hunt as being thoroughly demoralized by the death of his wife Dorothy (see December 8, 1972), and telling Barker, “Well, you do what you want, but I am going to plead guilty.” When Barker asks why, Hunt replies: “We have no defense. The evidence against us is overwhelming.” Barker asks, “What about Liddy and McCord?” asking about the two accused burglars, G. Gordon Liddy and James McCord, who are being tried separately. Hunt replies: “Liddy and McCord are in a different sector. We are in one sector and they are in another. They have their own plan.” Barker then asks the Cubans’ lawyer, Henry Rothblatt, what his strategy is. Rothblatt confirms that they have no defense against the charges (see Early January, 1973), but he intends to “aggravate that Judge Sirica [John Sirica, presiding over the trial] to the point where I am going to drive him out of his cotton-pickin’ mind, and he is going to make so many mistakes with his arrogance that this will be a perfect case for appeal.” Unimpressed, Barker says he will follow Hunt’s lead and plead guilty. Rothblatt insists that Barker not trust Hunt and the others, saying: “They are a bunch of b_stards. They’ll double-cross you. They’ll sell you down the river.” Nevertheless, Barker and the other three burglars agree to follow Hunt’s lead and plead guilty. Rothblatt resigns from the case. Apparently, Barker is unaware at this time of Hunt’s negotiations with the White House for executive clemency for himself. [Harper’s, 10/1974]
Entity Tags: Henry Rothblatt, E. Howard Hunt, Dorothy Hunt, Bernard Barker, Eugenio Martinez, G. Gordon Liddy, John Sirica, Virgilio Gonzalez, James McCord, Frank Sturgis, Nixon administration
Timeline Tags: Nixon and Watergate 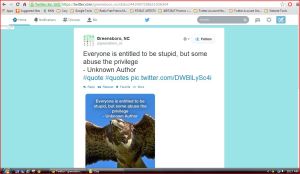 In 2015, I posted an article by George Heymont  “You can’t Fix Stupid” from 2012, and sadly it is still relevant.  We have those leaning right in several industries, some voted into office on the local and state level, others have seats in Congress who continue carpetbagging, voting against their own constituents, clearly acting out, doing the best they can to make sure certain types of people never get close to the highest office lest we talk about how our first opportunity for a Woman at the helm in 2016 if folks had turned out.

It’s now 2021 and the stupid continues to spread.

The thing that keeps coming to my mind is what the character of “Forrest Gump,” says, “stupid is as stupid does.” The fact is, voters, have gotten a box of chocolates like the character “Forrest Gump,” says, “We never know what we are going to get”  which is not the way a POTUS or a democratic republic should reign. When Republicans are in charge of Congress they get on the airwaves and say whatever their base wants to hear, and then get on the floor of Congress to pass legislation with nasty riders that ultimately hurt our fellow Americans.

My question continues; when will voters decide that while there is nothing wrong with disagreeing, debating, and setting up a schedule for voting last-minute bills; trying to pass legislation knowing it will hurt your constituents is unacceptable. When Congress is led by republicans, the extreme right in both Chambers seems to believe that most if not all legislation should be designed for the rich and not for the good of all Americans who also vote. I find it offensive to think Congress cannot seem to find a fair conclusion that allows Americans an opportunity to prosper instead of pushing and voting for that trickle-down financial system, which no longer works (never worked). We cannot forget what happened during the Bush years and why! That the folks in Congress at the time failed American voters while  Banks, folks like AIG, hedge funders decided that best business practices or acting in a good faith effort.

If you’re listening honestly, voters who sat on the sidelines helped guarantee that the old republican attitude or southern strategy is not only close at hand, alive and well but still very active with the new governmental trifecta in charge … this is stupid!