On May 28, 1863, the 54th Massachusetts Regiment, which was the first black regiment in the Civil War, arrived in Boston after completing its training at Camp Meigs and marched to the State House, with its commander Robert Gould Shaw, for the formal presentation of the regiment’s colors.

In attendance at the presentation were William Lloyd Garrison, Wendell Phillips and Frederick Douglass, whose two sons were members of the regiment.

Residence at the time of the award: London, United Kingdom

Role: A worldwide organization for the protection of the rights of prisoners of conscience

A Light in the Darkness

Amnesty International is a worldwide human rights organization run by its members. It is independent of all governments and all financial players. It is also independent of political convictions and religious faiths.

Amnesty International uncovers the facts about violations and breaches of human rights. The issues may concern individuals or conditions within a particular state, but the organization also pursues various themes, such as the death penalty. Results are published in special reports. Amnesty’s members organize targeted action and campaigns to bring an end to violations.

Amnesty International was founded in 1961 by the British lawyer Peter Benenson. He got the idea for the organization’s logo – the lit candle surrounded by barbed wire – from a Chinese proverb,”It is better to light a light than to curse the darkness”.Copyright © The Norwegian Nobel Institute

585 BC – The Persian-Lydian battle ended.

1863 – The first black regiment left Boston to fight in the U.S. Civil War.

1892 – The Sierra club was organized in San Francisco, CA.

1929 – Warner Brothers debuted “On With The Show” in New York City. It was the first all-color-talking picture.

1934 – The Dionne quintuplets were born near Callender, Ontario, to Olivia and Elzire Dionne. The babies were the first quintuplets to survive infancy.

1953 – The Walt Disney film “Melody” premiered in the Paramount Theatre in Hollywood. The picture was the first 3-D cartoon.
Disney movies, music and books

1957 – National League club owners voted to allow the Brooklyn Dodgers to move to Los Angeles and that the New York Giants could move to San Francisco.

1976 – The Peaceful Nuclear Explosion Treaty was signed, limiting any nuclear explosion – regardless of its purpose – to a yield of 150 kilotons.

1985 – David Jacobsen, director of the American University Hospital in Beirut, Lebanon, was abducted by pro-Iranian kidnappers. He was freed 17 months later.

1998 – Dr. Susan Terebey discovered a planet outside of our solar system with the use of photos taken by the Hubble Space Telescope.

1999 – In Milan, Italy, Leonardo de Vinci’s “The Last Supper” was put back on display after more than 20 years of restoration work.

2002 – Russia became a limited partner in NATO with the creation of the NATO-Russia Council.

2015 – The Observatory at One World Trade Center officially opened. 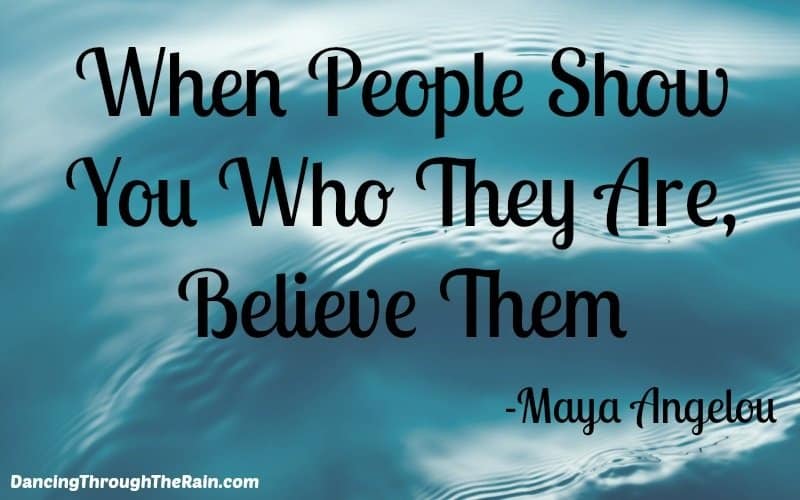 “When people show you who they are, believe them.” This can be one of the hardest pieces of advice that I’ve ever tried to follow, but it is sage advice. When someone really shows you and tells you who they are, take them at their word. If someone you are dating cheats on you, see it.

When someone you love quits school because it’s not the right direction for them, hear them. When someone tells you that they have nothing left to give, believe them.

People know themselves far better than you know them. That is not to say that people can’t change down the road, but it does mean that when they are saying “this is who I am right now,” you can’t expect them to be someone else. Which leaves you in an empowering position. When you look at someone for who they are and not who you want them to be, you can decide if this is a healthy or unhealthy force in your life. You deserve to have healthy surroundings. If someone tells you over and over, “I love you, but I’m not healthy,” you have some decisions to make.

I know what you’re thinking, “But people can change! They can be what I envision for them!” This is unequivocally true – BUT, they will not change for you. They will not change within your time frame and you both have lives to live. Go live your life! If this person (friend, family, love) wants to be in your life, they will find the will to do the things that they have to in order to qualify for your definition of healthy. Just remember – that is on them, not you. If you find that your life has moved into a space that doesn’t include them any longer, wish them well! If you come back together and find that you mesh just right, invite them back in and continue the relationship. It is your path to navigate!

for the complete article and interview go to