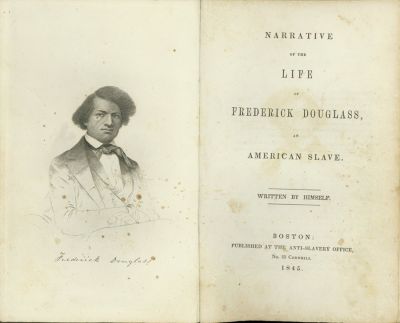 On this day in 1841, Frederick Douglass, a fugitive slave, addressed a white audience for the first time when he spoke to a gathering of abolitionists on Nantucket. “It was with the utmost difficulty that I could stand erect, or that I could command and articulate two words without hesitation and stammering,” he later wrote. While his speech may have been halting, it had immediate impact. Leaders in the Massachusetts Anti-Slavery Society invited him to work with them. He quickly established himself as a formidable orator. Within five years, Douglass had a national and international reputation. He wrote three autobiographies, edited several newspapers, took a leading role in the woman’s movement, and served for over half a century as an untiring advocate for racial justice.

Frederick Douglass’s speeches were so eloquent and polished that his listeners sometimes questioned the authenticity of his story. How could a man who had been enslaved since birth, who had had no formal education be so knowledgeable and articulate? As a fugitive, Douglass gave few specific details of his life in the South, further fueling suspicion. Prominent members of the Massachuetts Anti-Slavery Society advised him to “have a little of the plantation speech . . . it is not best that you seem too learned.” Douglass would not degrade himself. Instead, in 1844 he wrote an autobiography, Narrative of the Life of Frederick Douglass, Written by Himself.

He was born on the Eastern Shore of Maryland in 1818. No one knows the exact date since slave births were not a matter of public record. His maternal grandparents raised him, and he remembered seeing his mother only a few times when she stole away at night to visit him. As he understood it, the man who enslaved him was his father, but this afforded him no protection from the cruelties of chattel slavery. When he was eight, he was sent to serve his master’s relatives in the port city of Baltimore.

His mistress there taught him the basics of reading, although once her husband learned of it, he put an immediate end to the tutoring. The boy understood the power of literacy and used every means possible to learn. Living now in a large city, he met free black people, had the opportunity to read about the anti-slavery movement in the North, and gained a greater degree of independence.

for the complete article massmoments.org