Yesterday on the House floor, Rep. Debbie Wasserman Schultz (D-FL) blasted the Republican “anti-woman, anti-child agenda.” Noting that Republicans have yet to bring up any legislation aimed at tackling the jobs crisis, she added, “[Republicans] have had time to bring forward an extreme anti-woman agenda.” This assault has been aided and abetted in recent weeks by anti-choicers at the state level as well, and by slick public relations campaigns aimed to convince Americans of the evils of abortion providers. The right is not only targeting abortion services, but also other essential services that provide contraception and other family planning services and programs that provide food and nutrition for many women who are pregnant or breastfeeding. If opponents of choice get their way, it will leave women nowhere to turn — nowhere to get essential family planning services, nowhere to get an abortion, and nowhere to get support once they are pregnant.

A SWIFT ATTACK: Republicans took 18 statehouses in the midterm elections, and strengthened their hold in many others. Fifteen states now have completely anti-abortion governments, which is five more than existed last year. In just the past few weeks, the assault on women’s rights has been swift and stunning. GOP state lawmakers in Arizona and Ohio unveiled so-called “Heartbeat Bills” to “prohibit women from ending pregnancies at the first detectable fetal heartbeat.” The heartbeat can be heard “within 18 to 24 days of conception” and “in almost all cases by six weeks” — a period in which “many women don’t even know they’re pregnant.” By dubbing it an “emergency item,” Texas Gov. Rick Perry (R) “fast-tracked” a bill mandating that “pregnant women be shown an ultrasound of the fetus at least two hours before an abortion.” In Kentucky, the state senate also passed a law requiring doctors to show women an ultrasound before an abortion — and if she chooses to avert her eyes, the doctor must describe the image to her. Doctors face a $250,000 fine if they fail to do so, and in Montana, a Republican legislator introduced a bill that would have doctors arrested if they don’t show women an ultrasound. These ultrasound laws rarely result in women changing their mind, but rather “add to the pain of an already difficult decision.” Most shockingly, as Mother Jones reported yesterday, a South Dakota statehouse committee passed a bill that would change the state’s justifiable homicide laws to allow murder in defense of an unborn child’s life — “an invitation to murder abortion providers,” says Vicki Saporta of the National Abortion Federation. This is shocking, especially in light of the long history of violence against abortion providers. Most recently, George Tiller, an abortion provider and frequent target of anti-abortion activists, was shot dead in his church in May 2009 by a man with ties to the state’s anti-abortion movement.

STATE RESTRICTIONS: Reproductive rights have long been under assault at the state level. Numerous restrictions on abortion already exist. For example, more than half of the states (32) prohibit state funding for abortions, except for in cases of rape or incest, or when the woman’s life is in danger. Four states actually prohibit private insurance from covering abortions except when the woman’s life is threatened and that number may soon increase. Twenty-four states require a waiting period for women before an abortion, usually 24 hours, meaning they must make two trips to the abortion clinic. This is a significant barrier for women seeking abortions in states like South Dakota, which has only one abortion clinic. Eighteen states require biased “counseling” for women seeking an abortion, and providers are often forced to tell women about a purported (and completely false) link between breast cancer and abortion (6 states), or about the supposed ability of a fetus to feel pain (10 states), or about alleged “long-term mental health consequences for the woman” (7 states). In this context, recent legislative assaults that further target abortion access are all the more reprehensible.

IN WASHINGTON: Federal funding for abortion is prohibited under the Hyde Amendment, which denies insurance coverage for abortion to women enrolled in government programs . The amendment is unfair to women’s health needs, and in particular, the needs of poor women and minorities, since they are most likely to be enrolled in Medicaid or other government programs for health insurance. As Jessica Arons, Director of the Women’s Health and Rights program at the Center for American Progress, wrote recently: “The Hyde Amendment is a policy that not only violates reproductive rights and principles of gender equity but one that undermines racial and economic justice as well.” Unfortunately, President Obama signed an executive order that applies the Hyde Amendment to the recent health care reforms, including the private plans purchased on health insurance exchanges. But that wasn’t enough for Republicans in Congress, who have devoted far more time to further restricting abortion access than on legislation to address the unemployment crisis. Rep. Chris Smith (R-NJ) introduced H.R. 3 early in the 112th Congress, which would not only make the Hyde Amendment permanent, but expand many of the restrictions on federal funding and coverage for abortions. This is the bill that now infamously tried to redefine rape so that only “forcible rape” victims could be exempt from Hyde Amendment provisions. H.R. 358, introduced by Rep. Joe Pitts (R-PA), would make it almost impossible for women to get private insurance coverage of abortions through the health care exchanges created by the recent health care reforms, but would also let public hospitals refuse to provide emergency abortion care even when necessary to save a woman’s life. Rep. Mike Pence (R-IN) this week introduced an amendment to the continuing resolution, which funds the government, that would prohibit any federal money from going to Planned Parenthood of America for women’s health services, gynecological exams, access to birth control, HIV testing, private care, or infertility counseling. The continuing resolution proposed by Republicans also slashes or eliminates funding for many programs crucial to women’s health: it would completely eliminate the Title X domestic family planning programs, and would also dramatically cut, by $758 million, the Women Infant Children (WIC) program, which provides food for low-income pregnant, breastfeeding, and non-breastfeeding postpartum women. The Republican CR proposal also includes a $210 million cut in Maternal and Child Health block grants.

THE PUBLIC FRONT: This brutal assault on women’s rights is being carried out with the help of a slick — but deceptive — public relations effort by many leading right-wing news outlets. Last month, members of the group Live Action dressed as a pimp and prostitute, and surreptitiously recorded several visits to Planned Parenthood clinics across the country as they asked for help with health exams and abortions for supposedly underage prostitutes. Planned Parenthood alerted federal authorities to a possible child prostitution ring, and there’s no evidence in the tapes that Planned Parenthood planned to enable the fake pimp’s plot. The tapes are also heavily edited, which is not surprising given the group is closely tied to the disgraced Andrew Breitbart, who published their findings on his site. Nevertheless, Fox News has breathlessly taken up the allegations. Pence quickly used the videos to justify his attempt to eliminate all federal funding for Planned Parenthood, saying, “Every American should be shocked that an employee of the largest recipient of federal funds under Title X has been recorded aiding and abetting underage sex trafficking.” A story last month about a Philadelphia abortion clinic that was performing illegal late-term abortions — the doctor was charged with murder and infanticide of viable fetuses — was quickly used by the right-wing to justify its anti-abortion hysteria. Popular blogger Michelle Malkin breathlessly told readers of the “mass murder” done by the “serial baby killer” and his “abortion clinic death squad.” As it turns out, however, the clinic was purposely de-regulated by a Republican Pennsylvania governor years earlier and was operating as a quasi-underground operation. Far from proving that providing abortions is dangerous, the Philadelphia case illustrates what happens when women are driven to desperate measures due to policies like the Hyde Amendment, and would happen more broadly if the anti-choice agenda were successful: abortions will only be available at underground, unregulated, and dangerous clinics. 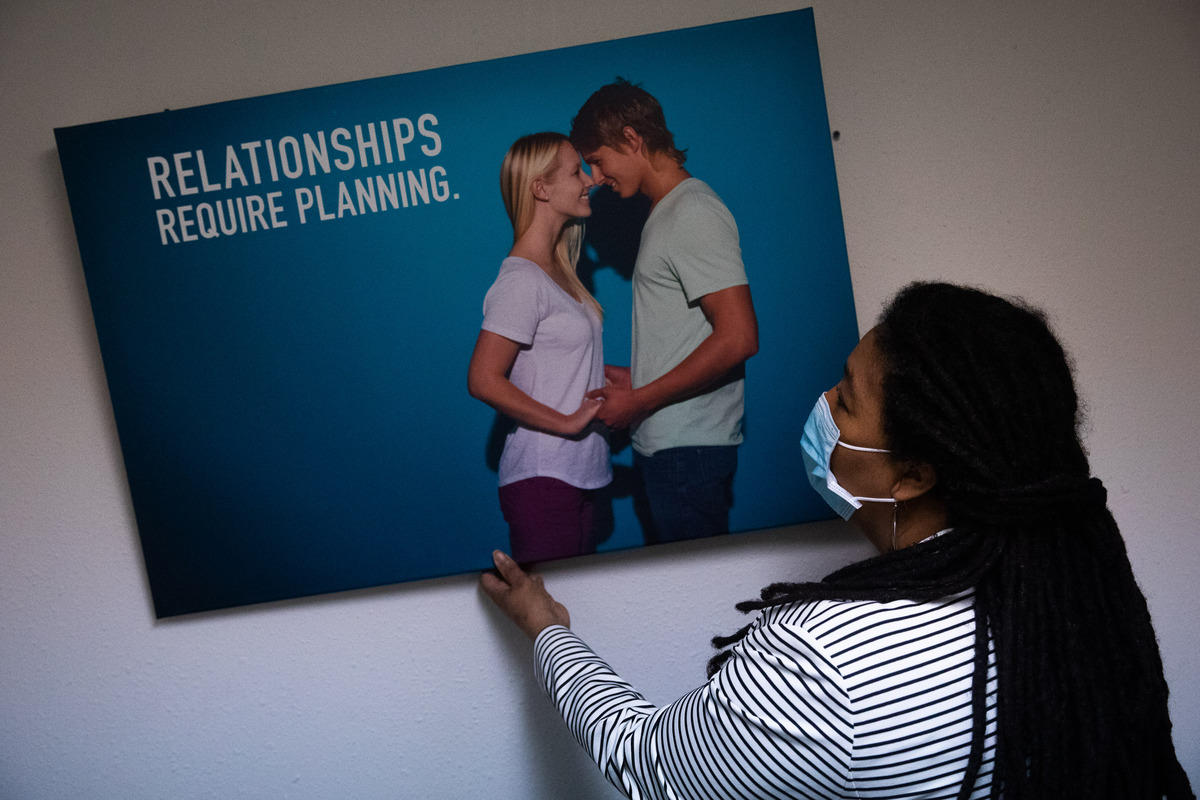 Sharon Dudash pulls a marketing photograph from a wall at Planned Parenthood in Kent on March 10, 2021. Planned Parenthood of the greater Northwest region has been facing financial struggles compounded by the COVID-19 pandemic. (Matt M. McKnight/Crosscut)

Young people have moved away from home or as College-aged kids often don’t have a place to turn to… Planned Parenthood helped a whole lot of people in the late ’70s and ’80s make good choices that would have taken them into dire straights as too young inexperienced parents. and while they had options with planned parenthood … This organization does much much more to help the community of all who inhabit it, so tell your member of Congress having Planned Parenthood in your community is so needed as a Choice because it’s all about Choices… A woman has a right to choose! Women should also have access to afforded healthcare that this organization also offers …The idea that members of the right don’t agree with this is beyond confusing