What is the 27th Amendment:

“No law, varying the compensation for the services of the Senators and Representatives, shall take effect, until an election of Representatives shall have intervened.” –

The 27th Amendment was first proposed on September 25th, 1789

Stipulations of the 27th Amendment The 27th

Amendment is the most recent constitutional amendment passed; as of 2011, there have been 27 Constitutional Amendments passed with regard to the Constitution of the United States of America

The 27th Amendment addresses the salary rate of members of Congress, which is comprised of a bicameral legislature – the Senate and the House of Representatives The 27th Amendment stipulates that members of the Congress are not permitted to adjust their respective wage earnings in the middle of a term; in the event of a proposed wage adjustment, members of Congress must address any or all concerns with regard to wage adjustment prior to the starting of a new Congressional term

States Not Participatory in the Ratification of the 27th Amendment

A recent article in the Houston Chronicle discusses the problem of so-called anchor babies, children born in U.S. hospitals to illegal immigrant parents. These children automatically become citizens, and thus serve as an anchor for their parents to remain in the country. Our immigration authorities understandably are reluctant to break up families by deporting parents of young babies. But birthright citizenship, originating in the 14th amendment, has become a serious cultural and economic dilemma for our nation.

In some Houston hospitals, administrators estimate that 70 or 80% of the babies born have parents who are in the country illegally. As an obstetrician in south Texas for several decades, I can attest to the severity of the problem. It’s the same story in California, Arizona, and New Mexico. And the truth is most illegal immigrants who have babies in U.S. hospitals do not have health insurance and do not pay their hospital bills.

This obviously cannot be sustained, either by the hospitals involved or the taxpayers who end up paying the bills.

No other wealthy, western nations grant automatic citizenship to those who simply happen to be born within their borders to non-citizens. These nations recognize that citizenship involves more than the physical location of one’s birth; it also involves some measure of cultural connection and allegiance. In most cases this means the parents must be citizens of a nation in order for their newborn children to receive automatic citizenship.

Make no mistake, Americans are happy to welcome immigrants who follow our immigration laws and seek a better life here. America is far more welcoming and tolerant of newcomers than virtually any nation on earth. But our modern welfare state creates perverse incentives for immigrants, incentives that cloud the issue of why people choose to come here. The real problem is not immigration, but rather the welfare state magnet.

Hospitals bear the costs when illegal immigrants enter the country for the express purpose of giving birth. But illegal immigrants also use emergency rooms, public roads, and public schools. In many cases they are able to obtain Medicaid, food stamps, public housing, and even unemployment benefits. Some have fraudulently collected Social Security benefits.

Of course many American citizens also use or abuse the welfare system. But we cannot afford to open our pocketbooks to the rest of the world. We must end the perverse incentives that encourage immigrants to come here illegally, including the anchor baby incentive.

I’ve introduced legislation that would amend the Constitution and end automatic birthright citizenship. The 14th amendment was ratified in 1868, on the heels of the Civil War. The country, especially the western territories, was wide open and ripe for homesteading. There was no welfare state to exploit, and the modern problems associated with immigration could not have been imagined.

Our founders knew that unforeseen problems with our system of government would arise, and that’s precisely why they gave us a method for amending the Constitution. It’s time to rethink birthright citizenship by amending the 14th amendment.

Dr. Ron Paul is a Republican member of Congress from Texas.

Why We Need to Invest in Infrastructure

The United States was once a leader in infrastructure, but we’re slipping. Repairing our crumbling roads and bridges will help position our economy for long-term growth.

“Every time we’ve invested in infrastructure, as Democrats, as Republicans — every time we’ve done it, the economy grows,” said Vice President Biden. “And it grows good, decent-paying jobs.”

Listen to the Vice President explain why we need to invest in our infrastructure:

The President and Vice President welcomed some of the country’s best law enforcement officials to the White House, honoring their remarkable service and sacrifice.

President Obama is calling on Congress to pass a bill to put Americans to work repairing our crumbling roads and bridges — avoiding a crisis in the short term, and helping to position our economy for long-term growth. 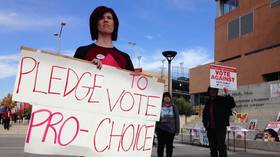 Albuquerque becomes latest abortion battlefield
By Cindy Carcamo
A ballot initiative — thought to be the nation’s first such municipal measure — would bar the procedure at 20 weeks. Such a ban would have statewide impact.

A 5th grade class in Hamburg just saved their classmate Gleb from deportation — all it took was a petition and a few thousand signatures.
Gleb fled to Germany to get treatment for Leukaemia. He got an operation that saved his life, started to attend school and quickly became top of his class, but then the government tried to send him back to Russia. His classmates started a petition on the community petition site to their local government officials to stop the deportation.
When the petition took off, their council member started paying attention. And in weeks, Gleb was saved, able to continue the treatment he so desperately needed. His friends saved his future, and it all started with a simple step — click below to start a campaign on an issue you care about or send this email to a friend. You never know who might start the next great campaign to change someone’s life or change the world!
http://www.avaaz.org/en/petition/start_a_petition/?cl=2929208333&v=25689
With just a few focused minutes, Gleb’s classmates kick-started an amazing campaign that led to an impressive victory. Imagine if all of us committed a little time to start a campaign – there’s no limit to what we can achieve!
Starting a campaign only takes a few minutes, but the impact of success can last for years. Plus, if the petition gets enough support on its own, the staff at Avaaz could pick up the campaign, add strategic advice, media help, and even send it to a wider list of members. We’ve got tonnes of tips and advice to help you along the way — all it takes is to get started, share your passion and you can be on your way to winning on any issue – local, national or global.
Send this email to the people you know who have great ideas about how to make the world a better place or click on the link to be a part of it:
http://www.avaaz.org/en/petition/start_a_petition/?cl=2929208333&v=25689
Many Avaaz campaigns have been started by Avaaz members, from bringing hundreds of workers in Bahrain safely home to India, to allowing partners stay in touch with imprisoned love ones in New Mexico. All these took just a few minutes to get started. Let’s become world-changers together and multiply our impact by the thousands.
With hope and excitement for all we can achieve together,
Emma, Oli, Dalia, Patri, Laura, Ricken, Luis, Chris and all of the Avaaz team