Shut it, you long-haired hippie
An “anti-public service” message from Donny Rico

See, me and Chevron are paving the way for corporate freedom in America. Freedom from accountability, freedom from watchdog punks and freedom from caring about how our actions affect the rest of yous. When those pesky Ecuadorians spouted off about the fact that Chevron did a piece of work and chose to dump billions of gallons of toxic waste in their rainforest, we decided to turn the tables and it worked like a real charm. Chevron’s tired of being the victim just because over a thousand people died of cancer in Ecuador and we wrecked the Amazon rainforest.

Now, I hear some of you babbos got it in your heads to call on the U.S. Senate to investigate or some such garbage and try to put a stop to this. That ain’t gonna work. But go ahead and try and see what Chevron has to say about you and your 36 environmental, human rights and corporate accountability groups getting involved. You’re just asking for us to label you as “co-conspirators” and sue your asses under RICO, too!

See, RICO ain’t just some law to go after the mob, it’s the wave of the future. Thanks to RICO, anyone, and I DO MEAN ANYONE who speaks up about Chevron’s… ahhh… problems in Ecuador is a “co-conspirator” in the RICO world. That means we can drag yous all to court, subpoena all your emails and documents, and force you to shell out boatloads of cash to lawyers just to defend yourselves. And your reputation? Fuggetaboutit! See we got enough cash to crush your reputations. We’ll just call all your friends and tell ‘em you’re extortionists. You guys already gotta ask people for money just to stay afloat, so who’s gonna give it to ya if we make you look like crooks?

So be smart. Keep quiet and let Chevron do its thing. Oh, and that goes for all of yous activist types and do-good lawyers. If you think big energy companies are gonna let you organize people who got a beef with fracking and new pipelines – think again. We got enough legal muscle and friendly judges out there to go after anyone who does anything to threaten our bottom line. So if you go tellin’ people not to buy our products and instead get some organic-vegan-cotton throw pillow or some such tree-hugging junk, well then you’re conspiring to cost us money. And THAT is a RICO crime, got it?

If you still don’t get the message, watch my little video and you’ll learn real fast. See, this ain’t gonna end with Chevron. Once we get away with charging our own victims in Ecuador as crooks, there’s no limit to who we can go after. Freedom of speech don’t mean you can say things we don’t like – you’ve been warned.

“Holy….!” That was the first thought that went through my head while looking out the window during a recent flight over Indonesia. Where there was supposed to be rainforest, rows of palm trees stretched to the horizon.
The forest was gone — bulldozed, burned and replaced with palm oil plantations. The destruction was unimaginable.
It was that moment I realized it was going to take a global effort on a massive scale to transform the palm oil industry from the rainforest’s biggest threat to a partner in its protection. I work for Greenpeace because I know it’s possible. But not without your support.
Help stop rainforest destruction for dirty palm oil. Please give what you can to support Greenpeace’s work to save the Indonesian  rainforest and fight on the frontlines of environmental destruction  everywhere.

We are almost to our goal of raising $150,000 by Dec. 31. Joao Talocchi Greenpeace Palm Oil Campaigner
My flight above the palm oil plantations had been a shock, but nothing prepared me for the forest destruction on the ground. I arrived in one of the most crucial regions of Indonesian rainforest to find miles of forest burned or cleared. Not even in use — just destroyed and empty.
What had been habitat for endangered orangutans, tigers and even elephants just months before was now burnt stumps and fallen logs. Every step I took raised a small cloud of ash.
Even though many patches of rainforest like the one I visited are cleared illegally, the Indonesian government often doesn’t have the power or resources to investigate.
Greenpeace does, though only through the support of people like you. Make a gift now and add the power that makes our campaign to stop rainforest destruction, and all of our work, possible.
We are on the ground finding answers, monitoring for new areas of forest destruction from satellite, and holding palm oil companies and their customers accountable — even when authorities fail to do so.
And the progress we’ve made since my first visit has blown me away. The largest trader of palm oil in the world committed to only buy traceable zero-deforestation palm oil after Greenpeace exposed their connection to forest destruction this year. Big companies like Unilever and Nestle have made policies to only buy no deforestation palm oil.
We haven’t won yet. But we’re making progress. Now is an absolutely critical time.
2014 could be a turning point for the rainforests of Indonesia. Make a donation today to our efforts to save the rainforest and protect the environment worldwide. We have almost reached our goal of $150,000 by Dec. 31, and every gift makes a difference.
Greenpeace is completely independent. We don’t take a dime for corporations or governments. It’s what allows us to hold those responsible for rainforest destruction accountable and to do what’s right for the environment. It also means that without the support of people like you, none of it is possible.
Let’s make 2014 an even better year than this year for rainforests in Indonesia. For the endangered animals that live there. For the climate. And for our future.
Thank you,
Joao Talocchi Greenpeace Palm Oil Campaigner
P.S. Please make a donation today to our work on environmental frontlines around the world. We have almost reached our goal of $150,000 by Dec. 31st, and every gift counts. 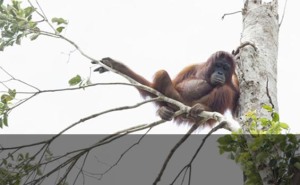 I stand with RAN in calling on the US snack food industry to help stop the destruction of Indonesia‘s rainforests for palm oil.

The rainforests of Indonesia are some of the most biodiverse forests in the world and home to a number of endangered species, like Sumatran orangutans, Sumatran tigers, pygmy elephants and rhinoceros. These rainforests continue to be destroyed to produce palm oil so it can be used in the manufacturing of food products, including in snack foods and sweets that are some of America’s favorite brand name products.

I would prefer my crackers, chocolate, cookies, peanut butter, and ice cream not to come with orangutan extinction. That is why I am standing with RAN in calling on snack food companies to protect Indonesia’s rainforests and all of the people and wildlife who depend on them by cutting palm oil tied to rainforest destruction and social conflict out of their supply chains.

We have reached the last stand for Sumatran orangutans, but it’s not too late to save them.

Many Americans are being made into unwitting accomplices in the destruction of Indonesia’s rainforests—which provide crucial habitat for a number of endangered species like the Sumatran orangutan—because palm oil is in half of all the products on their neighborhood grocery store‘s shelves. In the months ahead, we’re going to tackle this problem at its source.

RAN has just sent letters to 20 snack food companies—makers of some of the most popular brand name products in America—alerting them to the rainforest destruction and orangutan extinction in their supply chains.

Stand with us: Sign our petition and demand the snack food industry remove rainforest destruction from its products.

Forget Black Friday. It’s Non-Profit Tuesday! (No, we didn’t make that up.)

The holidays are coming up soon, and you’re probably starting to look for gifts for your loved ones. But—going out on a limb here—I’m willing to bet you don’t want to give a bunch of useless stuff to your friends and family. That’s why we’re excited to offer a variety of gifts that will make a world of difference without crowding our world with more disposable junk.

A Certificate of Action from RAN isn’t stuff—it’s a unique way to support our work to protect rainforests around the world and the people and wildlife that depend on them. You’ll be giving a meaningful gift to a loved one while at the same time doing something good for the planet.

Celebrate the holiday spirit this year by giving a gift that makes a world of difference. Thank you for your ongoing support!

P.S. These creative gifts make it easier than ever to support RAN’s work for the environment.