Five Tips for a Safer Spring Break
It’s the season when college students are off for spring break. But if they’re traveling, they’ve got to stay safe.
The Office of Women’s Health (OWH) at the Food and Drug Administration (FDA) is taking new steps to ensure that young women have access to timely wellness information.
To do this, OWH is launching a new web page with information about health issues to help young women stay safe on vacation and beyond.
Read this Consumer Update for tips on sun exposure, taking medications, contact lens care, tattoos and henna, and healthy eating. 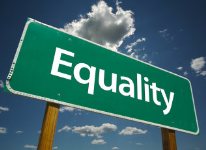 After days and weeks of offensive down right discriminatory comments coming from Politicians already in office, folks running for office, even some pundits are riding on the edge of truth but the reality is – this kind of rhetoric,  this fear mongering could quite possibly put our democracy at risk.

The only solution is to End the #trumpTrifecta yes, midterm2018matters

Compare and Contrast all the things that the Obama2010admin as well as Congress managed to achieve despite the Republican Tea Party.

Observe and analyze who what when and why things have not improved as some out there on the left want and then remind them  what people said … that a President that goes too far left of center is not representing all Americans. The truth is most people “most” used to be moderate and expect the President to be not just moderate but bipartisan; until Obama! And while folks on the right said one thing and did another on the floor of congress and btw this is standard republican behavior no matter who is in office, it makes you wonder if taking a hard left is the only way to solve and get the People’s Business done and back on track.

Then reality comes back and we have to remember the Democratic Party is made up of a huge tent with various degrees of democratic ideology and going or taking that hard left was not only a mission impossible but possibly no one was or is ready for.  The 2010-2013 Republican Tea Party were united no matter what their colleagues said or did,  the Democratic party on the other hand seem to fight to get good legislation on the floor of the Senate ,debate it to make progress in the move toward the 21st Century living. We all know our ability to move forward is being held hostage by the Republican Party having turned full out trumpNation until they can ruin our recovering economy of all “it’s Obama” stamp. I hope my worry is your worry, that we will have no place to go or anyone to help if in fact we fall into a deep recession … again!

I have to say my Observation of “the Media” … is not just giving Republicans more airtime but seemingly those folks know who is buttering their paychecks so the fair and balanced slogan when describing the news is just a joke now.

We must remember what happened in 2008! Yes, Congress goes through change, but the era of trump is at hand. Now, more than ever we need main stream media to provide on a daily basis information on the failure of the house of bush, the deficit he left and finding out that Wall Street, Oil and the Banks as well as AIG made bets not only with the people’s money but against us – you would think some would understand that after years of corruption it might take years to make all the corrections given the fact that some parts needed to make the fix are being held hostage by Republicans.  I am no expert but people need to compare their own budgets to what happened in 2008 then estimate your recovery time…  and realize any correction will take a long time especially since folks on the right were able to downsize/block or stall most of the financial fixes in the Senate.  So, voters need to take a real look at the spending that team trump is engaged in and call him out.

The Democratic Party needs to get our arses out to vote.

Mitdterm2018 is a pivotal moment and if we really want change; Not Autocratic change, we need to urge all protected classes to make sure they vote. It has become apparent that some folks do not understand why the process of change cannot and should NOT be done by only the POTUS but Congress in both Chambers as separate branches of our government needs to do the work of the people.  While it is obvious, the House is definitely representing $$$$ the Senate faces obstacles and the only solution is getting truer Dems on the floor of the Senate. We must make sure our Nation is NOT sliding into an autocratic nation to which some of trump supporters have expressed as a good change? Come on!?

President Obama did the best he could with what the last admin left him and again it took a long time to get to an improved 2017 but it seems team trump has not only stripped away the Obama legacy it has hurt Americans in ways that probably won’t be fully felt until 2019.  We are witnessing those on the right who choose to provoke trump fear; lately that has turned into action by those feeling certain TV or radio personalities were giving them subliminal instructions to act against those who support the Democratic Party ,Muslims, Black and Brown folks and Jews. That has got to stop; it would be even better if “the Media” would stop giving folks on the right passes when they make outrageous, racist, xenophobic exclusionary comments…we hear it from Fox News but now cable stations, depending on the day or hour seem to take a hard right and has this viewer wondering where the money is coming from, supporting the more extreme view on our airwaves? But then again Sinclair Broadcasting is another animal doing its best to alter the facts and reality of our daily lives.  What we are seeing by some reporters, pundits, and talking heads  are of engaging in the dance of “News manipulation” which is a sad representation of what real journalists, reporters and commentators used to be … What hashtag #FreePress means and meant to our founding fathers …lol

If you are trying to figure out exactly how we got into this mess?  Remember that once fabulous video “House of Cards” by David Faber…on CNBC… but I don’t believe it’s still available

What have you Observed?

(Takepart) – For the first time, plastic particles have been found in the stomachs of tuna and other fish that are a staple of the human diet.

More than 18 percent of sampled bluefin, albacore, and swordfish caught in the Mediterranean Sea and tested in 2012 and 2013 carried levels of plastic pollution in their bodies, according to a study published in the journal Marine Pollution Bulletin.

All three species migrate between the Mediterranean and the Atlantic Ocean, so these plastic particles could make their way onto the plates of American consumers. The plastics found in the fish contained phthalates, nonylphenol, bisphenol A, brominated flame retardants, and other chemicals that previous research has linked to endocrine disruption, low reproductive rates, and other health risks.

A 2010 study by French and Belgian marine biologists estimated that 250 billion pieces of microscopic plastic were floating in the Mediterranean. A 2014 expedition by Gabriel Gorsky of Pierre-et-Marie Curie University found that “there is not one parcel of the Mediterranean Sea that is devoid of plastic or plastic fragments.” Another study published last year estimated that all of the world’s oceans combined carry more than 5 trillion pieces of plastic pollution.

The current study of large pelagic fish (which live in the open sea, away from the shores or the bottom of the ocean) examined 56 swordfish, 36 bluefin, and 31 albacore that had been caught in the Mediterranean. Of those fish, seven swordfish, 11 bluefin, and four albacore contained plastics in their stomachs.

The plastics varied in size from large pieces more than 25 millimeters wide to microplastics smaller than 5 millimeters. The swordfish were more likely to have ingested large fragments of plastic, while the albacore ingested mostly microplastics.

Most of the pieces were white or transparent, while some “yellowish” plastics were found in the stomachs of the swordfish and bluefin.

As large, “top of the food chain” predators, the fish could have picked up plastic that had first been eaten by smaller fish; a study published last year found that Mediterranean bogue, an important prey species for swordfish, ingest large quantities of microplastics. The researchers, from the Institute for Environmental Protection and Research in Italy, wrote that other plastics could have been ingested while the tuna chased schools of prey fish into shallow waters, where floating plastics are more abundant. [more]

ABSTRACT: This study focuses, for the first time, on the presence of plastic debris in the stomach contents of large pelagic fish (Xiphias gladius, Thunnus thynnus and Thunnus alalunga) caught in the Mediterranean Sea between 2012 and 2013. Results highlighted the ingestion of plastics in the 18.2% of samples. The plastics ingested were microplastics (<5 mm), mesoplastics (5–25 mm) and macroplastics (>25 mm).

These preliminary results represent an important initial phase in exploring two main ecotoxicological aspects: (a) the assessment of the presence and impact of plastic debris on these large pelagic fish, and (b) the potential effects related to the transfer of contaminants on human health.

The Supreme Court just made a major decision that impacts voting rights for every American. In striking down Section 4 of the Voting Rights Act — but leaving Section 5 untouched — there is no longer a mechanism in place to prevent states with a history of voter disenfranchisement from enacting such laws.

While this is a setback, it is by no means the end of the game. The Supreme Court’s decision gives Congress complete authority to ensure no person is denied the right to vote.

Communities of color, and young, women, elderly, and disabled voters are at risk. Tell Congress to take immediate action to protect the voting rights for millions of Americans. Sign our petition today.
www.NAACP.org

It’s hard to believe: voting rights are still under attack.In this past election, millions waited hours to vote and faced confusing voter ID laws that made it difficult to exercise their most fundamental right.

As shameful as that is, it could get worse. The Supreme Court is considering whether to strike a critical component of the Voting Rights Act – a landmark law that protects the right to vote for all.

In Shelby County v. Holder, the Court heard arguments challenging the constitutionality of requiring jurisdictions with a history of racially-based voting discrimination to “pre-clear” changes to their voting laws. Opponents are calling it unconstitutional because it only requires pre-clearance in areas with deep, historical discrimination patterns.

Quite simply, they’re wrong. We need to let the Supreme Court – and Congress – know that we want the Voting Rights Act protected. 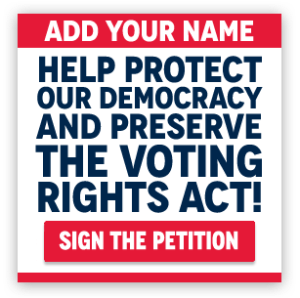 We can only move this nation forward when we move it forward together, and we can only do that when every citizen is assured of the opportunity to participate in our democracy. That assurance is the right to vote.

Judging by the long lines we saw at some polling locations, the extremely gerrymandered districts and the ongoing state legislative efforts to tilt elections by restricting access to the ballot box, the Voting Rights Act is still necessary.

The Supreme Court should uphold the Voting Rights Act in its entirety.

It is incumbent on us to help make that clear.

We must take a stand.