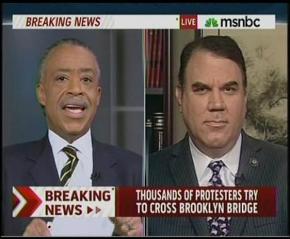 Herman Cain came to Orlando to campaign against me last week. And yes, it’s still more than six months before the November election. But as the Republicans see it, I am what the military refers to as a “high value target.” So they bring out the big guns early, and the bombardment begins.

I’ve told people that I was secretly hoping that Herman Cain would win the Republican nomination. Because if both parties nominated an African-American for President, then every racist in America would feel like committing suicide.

Nevertheless, I was surprised to see Herman Cain leading in the Republican polls both in Iowa and nationwide, last October and November. I understand the Republican’s desperation to nominate someone other than Mitt Romney, but Herman Cain for President? Seriously?

What were his qualifications? Cain ran a pizza chain for ten years, during the last century. What Cain was very good at was paying people only $10 an hour, to deliver $20 pizzas. (Or the Herman Cain Special, two pizzas for $40.) After Cain took over, the chain quickly slipped nationwide from third to fifth. By the time Cain left, in 1996, he had wiped out thousands of jobs. Sort of like Mitt Romney, but with toppings.

Then Cain was a lobbyist for three years, with the National Restaurant Association. He shamelessly lobbied against the minimum wage, against health coverage, against smoking regulations and in favor of drunk driving (actually, against lowering the blood-alcohol limit). And when I say “shamelessly,” I mean it; did you ever hear Cain apologize for any of that?

Cain’s business career ended more than a decade ago. But rather than call himself “unemployed,” Cain called himself “running for office.” He ran for the Senate in Georgia in 2005. Johnny Isakson beat him like a drum, winning the Republican primary by more than two-to-one.

Then Cain sponged off of the Koch Brothers for a while. He became a paid public speaker for “Americans for Prosperity” (which, by the way, ran $2 million of lying TV ads against me in the last election). Cain was particularly adept at mouthing free-market pieties, like any failed businessman would be.

Then five women stepped forward and said that Cain had sexually harassed them. Cain’s defense: there were lots of women whom he had not harassed. Yet Republican voters apparently were OK with Cain’s history of sexual harassment, because Cain remained on top in the Republican polls.

But then . . . it came out that Cain had had a lengthy, apparently affectionate and supportive relationship with a woman who was not his wife! Whoa! Unlike sexual harassment, that is something that those sanctimonious right-wingers simply would not stand for, and Cain was done, done, done. (Maybe Cain should have tried BB King’s excuse: “When love comes to town I’m gonna jump that train. When love comes to town I’m gonna catch that flame. Maybe I was wrong to ever let you down, but I did what I did before love came to town.”)

Apparently . . . some people . . . have lost sight of the difference between notoriety and fame. By every rational consideration, Herman Cain is notorious, not famous. Why would any decent human being think that Herman Cain would be a wonderful headliner at a fundraiser for my Republican opponent? Charles Manson is quite notorious, yet you don’t see Manson welcomed as the guest of honor at political fundraisers, do you? (Although, to be fair, it would be hard for Manson to attend.)

But it worked. My opponent raised a ton of money, simply because Herman Cain came to town. It’s a pretty big year for predators, it seems.

I look at the ugly spectacle of the right-wing treating Herman Cain as though he were some kind of hero, and I say to myself, “we’ve got to win. We’ve really got to win.”

Maybe you feel that way, too.

It was a pretty big year for predators.
The marketplace was on a roll.
And the land of opportunity,
Spawned a whole new breed of men without souls.
This year, notoriety got all confused with fame.
And the devil is downhearted,
Because there’s nothing left for him to claim.
He said, “it’s just like home,
“It’s so low-down, I can’t stand it,
“I guess my work around here has all been done.”
And the fruit is rotten,
The serpent’s eyes shine,
As he wraps around the vine.
In the Garden of Allah.

Last year, the Seattle City Council voted 8-1 to enact legislation that mandates paid sick leave for employers with five or more employees. This ordinance, which applies to all employees who perform more than 240 hours of work in Seattle within a calendar year, takes effect on September 1, 2012.
The City of Seattle‘s Office for Civil Rights will enforce the new law, and has proposed administrative rules that cover aspects of implementation such as how sick time will accrue, notice requirements for employers, notice requirements for employees, and employee documentation.
The Seattle Metro Chamber, along with the Northwest Grocery Association and the Northwest Grocery Association, expressed several concerns upon the bill’s passage. The Chamber encourages you to share your thoughts about these proposed rules with City of Seattle officials to ensure that employer input is appropriately represented during this important time.

What you can do :