Shell is building a wall of LEGOs to hide the dirty truth of its plans to drill in the Arctic.

LEGO is loved by children everywhere, and that’s why it’s shameful that the dirty oil giant is using LEGO’s goodwill by partnering up with the beloved toy company.

Don’t let Shell sneak its way into our children’s toyboxes. Ask LEGO to stop its partnership with Shell TODAY.

Shell’s drilling plans put the Arctic at risk. This remote habitat is home to unique and beautiful animals like polar bears, narwhals, and beluga whales, and just one misstep by Shell could doom all of them to a disastrous oil spill.

LEGO wouldn’t put an oil spill in its Arctic Play Set — so why should it give Shell its support?

Shell is using LEGO to build a happy, carefree image, but behind the scenes it is mobilizing giant oil rigs to drill in the Arctic — putting the lives of polar bears, beluga whales, and more at risk of deadly oil spills.

Children don’t want to see their beloved polar bears drowning in oil, and I don’t think LEGO does either. It’s up to you to speak up and tell the toymakers that Arctic destruction is not a game.

By allowing Shell to nestle itself into our children’s toyboxes, LEGO is legitimizing the destruction of the Arctic to children and families. We know LEGO can do better.

Dedicated activists like you have helped delay Shell’s plans in the Arctic and opened up the public’s eyes to their dirty plans. Shell is desperately trying to rebuild its reputation by partnering with beloved brands like LEGO — but LEGO doesn’t have to play along. 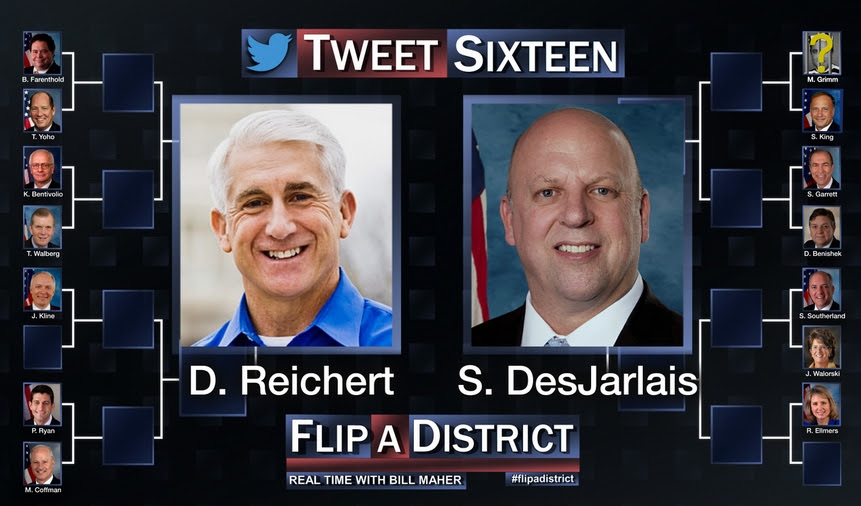 Rep. Dave Reichert has to go. And the national media is paying attention.

In 2012, the 8th was one of only 17 districts in the country where a congressional Republican won alongside President Obama.

And great news — Thanks to incredible grassroots support, they have recognized that Dave Reichert is vulnerable and placed him in the #FlipADistrict Sweet 16!

Winning this contest would put the race to Retire Reichert in the national spotlight and give it momentum going into the fall.

This Friday, Bill Maher will be selecting the #FlipADistrict Final Four.

The energy to Retire Reichert is building, and we have a strong Democrat, Jason Ritchie, taking him on.

Jason is a small business owner who works to remodel houses for injured veterans and other Americans.

A former community college history professor and a father of two, Jason knew someone had to stand up to Dave Reichert after Reichert voted to shut down the government, wasting $24 billion in taxpayer money.

Our grassroots will fuel this race — and we can multiply their impact by getting Jason the attention he needs online and in the news.

Some other things I’ve read this week: Felix Salmon’s explanation of why he’s joining Fusion, an interview with David Leonhardt about The Upshot, and updates about detained Vice reporter Simon Ostrovsky. Also, congratulations to Digby for a well-deserved award.

This week, the Roberts court attacked another race-conscious law. Conservatives responded by attacking established civil rights laws as a form of “reverse racism.” Meagan Hatcher-Mays explains how they are defending the systematic favoring of wealthy whites in the admissions process: http://mm4a.org/1hkWji1
Related: Five things you need to know about the Court’s affirmative action decision: http://mm4a.org/Qw32vp The right is also pushing lies about President Obama’s proposed clemency program:http://mm4a.org/1lCMEY8

The Racist Tirade Of A Conservative Media Hero

The right-wing media spent a long time promoting Cliven Bundy’s dispute with the federal government, even though Bundy was completely in the wrong. Will anything change now that Bundy has made virulently racist statements? http://mm4a.org/1ropemt
Related: This vile rhetoric is strikingly similar to remarks from conservatives from Rush Limbaugh to the WSJ editorial board: http://mm4a.org/1f7jTQz

Fox’s Ben Carson has a plan to replace Obamacare. Experts told Media Matters‘ investigative reporter Joe Strupp that it would be a disaster for everyone but the very rich: http://mm4a.org/1i8UuFI

IMAGE OF THE WEEK

Mark Ruffalo Speaks Out On The Right To Choose

Health and Human Services (HHS) Secretary Sylvia Mathews Burwell today announced $83.4 million in Affordable Care Act funding to support primary care residency programs in 60 Teaching Health Centers across the nation. The funding will help train more than 550 residents during the 2014-2015 academic year, increasing the number of residents trained in the previous academic year by more than 200 and helping to increase access to health care in communities across the country.Read more about today’s announcement.

“Carbon dioxide is good for plants, why do we have to limit it?”
Like this article?
Join our email list:

Stay up to date with the latest headlines via email.

1. Gavin McInnes: White liberals love Neil deGrasse Tyson so much he could defecate on them.

Gavin McInnes, ousted founder of Vice, now noted for racist, homophobic and misogynistic comments, obviously has all the right credentials to be invited onto Fox for some sober commentary about important things.

Just kidding. He was invited on the show to spew hateful and vile things and that’s just what he did. In a segment devoted to picking apart an interview with “Cosmos” host Neil deGrasse Tyson and Chris Hayes, McGinnes did not disappoint.

While talking to Hayes, Tyson had the audacity to make a joke, about his “greatest fear” being that intelligent life would steer clear of making contact with Earth because of the signals we unwittingly put out into space — including past TV and radio programs.

Pretty funny, right? Maybe a little science nerdy, but he is a scientist after all.

“I hate this guy,” McInnes blurted out. “I remember hearing Chris Hardwick on a podcast talk about Neil deGrasse Tyson and he was just salivating. White liberal nerds love this guy so much, he could defecate on them like Martin Bashir’s fantasies and they would dance in the streets.”

Little surprise he then segued from not very veiled racism to out-and-out racism saying that Tyson deserved whatever racial profiling he got when he was young because he “looked the part.”

“He talks about things like, ‘when I was young in New York I would get racially profiled when I’d go into stores,’” McInnes said. “Back then he looked like he was in the Warriors. He had a huge afro and a cutoff shirt and New York was a war zone. Sorry, you fit the profile.”

Meaning of course, being black.

2. Virtually every Republican after new EPA rules came out: I’m not a scientist but… here’s a bunch of idiotic stuff I learned in grade school.

The “I’m not a scientist, but” statement of faux humility was the most popular refrain this week in Republican circles, Facebook pages, Twitter feeds and press conferences. It was almost always followed by either second-grade level science like, “but carbon dioxide is good for plants, why do we have to limit it?” Or some other nonsensical argument against the new, much needed regulations.

It’s, “That’s right, so shut up and listen to what actual scientists have been saying about this for, like, ever.”

We know, we know. We live in dreamland.

You can read about them here.  And here. But if we had to pick a favorite, just on the grounds of moronic immaturity, the prize has to go to this pathetic imbecile:

“Thanks to the Obama administration’s EPA and the new regulations released today, America is poised to become the ‘no pee’ section of the global swimming pool,” said Marita Noon, executive director of some bogus right-wing group called Citizens Alliance for Responsible Energy. “Just because we declare that we won’t pee in the pool, won’t stop the others.… We’ll be stuck in our little no-pee section with a crippled economy while the rest of the world will be frolicking in unfettered growth.”

Well now, that is a terrific way of deciding on matters of vital national (and international) interest. C’mon everybody, let’s keep peeing in the pool, until, well, the pool is entirely urine, and no longer any water whatsoever. Or, they catch us, whatever comes last.

“Because I didn’t even know who he was, and there was two conversations happening in my office. I have two producers talking about Van Jones, and they were getting ready to talk to me about something, and I was talking to another two producers. And as I’m listening and I’m engaged in that, I just hear the name ‘Van Jones,’ and I said to those producers, ‘Stop.’ I turn around and said, ‘What was the name you just said?’ They said, Van Jones.”

A precondition to being a buffoon is blindness to your own buffoonery, and hypocrisy. And nothing beats the hypocrisy of the Republican response to the release of the American soldier Bowe Bergdahl. Initial cheers and tweets were immediately taken down and the distorted memory of Ronald Reagan as master-hostage-negotiator-with-terrorists has been resurrected. Iran/contra player Oliver North is making the rounds on conservative media, as if anything the convicted perjurer had to say was in the least bit relevant.

But the commentary on the release of Bergdahl from his Taliban captors reached its nadir when the right-wing commentariat decided to make the soldier’s father’s beard an issue. Brian Kilmeade told Fox & Friends that the beard, which Bergdahl’s father had been growing as a symbol of his son’s captivity, made the soldier’s father look like he was in the Taliban.

So, here’s the deal with long beards. They are copacetic with Fox & Friends as long as you say racist and homophobic things and declare Jesus Christ as your lord and savior, a la Phil Robertson and the Duck Dynasty clan. Otherwise, they’re a no-go. Especially if you speak a word of Arabic. Then you’re obviously in cahoots with suspiciously clean-shaven Obama for the Muslim takeover of America.

It’s hard to top calling Obamacare worse than slavery for crazy and offensive comparison. But neuroscientist-turned-right-wing crackpot Ben Carson has a restless mind. During an interview with the Daily Beast this week, Carson defended his position that Obamacare was sooooooo bad, it was worse than 9/11.

Carson pointed out that he thinks “9/11 is an isolated incident,” and of course, Obamacare is this ongoing catastrophe where millions of previously uninsured people now have access to healthcare.

When his questioner asked repeatedly what had done more harm to America, Obamacare or Osama bin Laden, Carson lost his cool.

Carson: “Will you listen? You have to take a long-term look at something that fundamentally changes the power structure of America. You have to be someone who reads. Who is well read.”

And if you read the same kinds of things Carson does —and believe them—you too can come up with crazily ridiculous comparisons.

Haters gonna hate. Sometimes haters gonna pretend their hating is love. And so the right-wing has taken up the cause of the oh-so principled Colorado baker who courageously refused to sell cakes to same-sex couples. Well, now Masterpiece Cakeshop owner Jack Phillips has been ordered by the Colorado Civil Rights Commission to stop discriminating against people whose sexual preferences are different from his.

“Keep going strong there,” she told the brave baker.

But the brave baker has taken his baking toys and is going home. He won’t bake if it must be for the kind of people he does not wish to eat his cake.

Strike another blow for freedom!