1558 – The French took the French town of Thioville from the English.

1611 – English explorer Henry Hudson, his son and several other people were set adrift in present-day Hudson Bay by mutineers.

1807 – British seamen board the USS Chesapeake, a provocation leading to the War of 1812.

1870 – The U.S. Congress created the Department of Justice.

1915 – Austro-German forces occupied Lemberg on the Eastern Front as the Russians retreat.

1925 – France and Spain agreed to join forces against Abd el Krim in Morocco.

1933 – Germany became a one political party country when Hitler banned parties other than the Nazis.

1940 – France and Germany signed an armistice at Compiegne, on terms dictated by the Nazis.

1941 – Under the codename Barbarossa, Germany invaded the Soviet Union.

1942 – A Japanese submarine shelled Fort Stevens at the mouth of the Columbia River.

1942 – In France, Pierre Laval declared “I wish for a German victory”.

1944 – U.S. President Franklin Roosevelt signed the “GI Bill of Rights” to provide broad benefits for veterans of the war.

1945 – During World War II, the battle for Okinawa officially ended after 81 days.

1946 – Jet airplanes were used to transport mail for the first time.

1956 – The battle for Algiers began as three buildings in Casbah were blown up.

1964 – The U.S. Supreme Court voted that Henry Miller’s book, “Tropic of Cancer”, could not be banned.

1970 – U.S. President Richard Nixon signed an extension of the Voting Rights Act of 1965. It required that the voting age in the United States to be 18.

1973 – Skylab astronauts splashed down safely in the Pacific after a record 28 days in space.

1978 – James W. Christy and Robert S. Harrington discovered the only known moon of Pluto. The moon is named Charon.

1980 – The Soviet Union announced a partial withdrawal of its forces from Afghanistan.

1989 – The government of Angola and the anti-Communist rebels of the UNITA movement agreed to a formal truce in their 14-year-old civil war.

1990 – Checkpoint Charlie was dismantled in Berlin.

1998 – The U.S. Supreme Court ruled that evidence illegally obtained by authorities could be used at revocation hearings for a convicted criminal’s parole.

1999 – The U.S. Supreme Court ruled that persons with remediable handicaps cannot claim discrimination in employment under the Americans with Disability Act.

2009 – Eastman Kodak Company announced that it would discontinue sales of the Kodachrome Color Film. 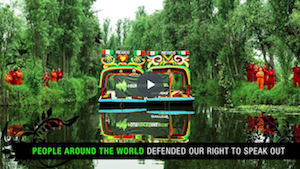 As we continue our legal battle against Resolute, the mega-corporation trying to sue us out of existence, we thank you for standing with the Greenpeace community.

With dedicated supporters, along with newfound allies, we’ve begun an incredible campaign of resistance. Free speech belongs to everyone. And together, we are showing that we won’t be silenced.

Check out the video of how Greenpeace supporters around the world are taking action to stand up for what is right, and share it!

This fight is far from over, but with your help, we will never back down.

and for those thinking Obama made your insurance premiums go up?

…do some research for once and get the facts !!!