1731 – Benajamin Banneker, inventor of the first clock in America, is born in Ellicot City, MD blackfacts.com

1857 – The “Atlantic Monthly” first appeared on newsstands and featured the first installment of “The Autocrat of the Breakfast Table” by Oliver Wendell Holmes.

1906 – U.S. President Theodore Roosevelt left for Panama to see the progress on the new canal. It was the first foreign trip by a U.S. president.

1911 – George Claude of Paris, France, applied for a patent on neon advertising signs.

1918 – Germany’s Kaiser Wilhelm II announced he would abdicate. He then fled to the Netherlands.

1923 – In Munich, the Beer Hall Putsch was crushed by German troops that were loyal to the democratic government. The event began the evening before when Adolf Hitler took control of a beer hall full of Bavarian government leaders at gunpoint.

1938 – Nazi troops and sympathizers destroyed and looted 7,500 Jewish businesses, burned 267 synagogues, killed 91 Jews, and rounded up over 25,000 Jewish men in an event that became known as Kristallnacht or “Night of Broken Glass.”

1953 – The U.S. Supreme Court upheld a 1922 ruling that major league baseball did not come within the scope of federal antitrust laws.

1961 – The Professional Golfer’s Association (PGA) eliminated its “caucasians only” rule.

1965 – The great Northeast blackout occurred as several states and parts of Canada were hit by a series of power failures lasting up to 13 1/2 hours.

1967 – A Saturn V rocket carrying an unmanned Apollo spacecraft blasted off from Cape Kennedy on a successful test flight.

1979 – The United Nations Security Council unanimously called upon Iran to release all American hostages “without delay.” Militants, mostly students had taken 63 Americans hostage at the U.S. embassy in Tehran, Iran, on November 4.

1981 – U.S. troops began arriving in Egypt for a three-week Rapid Deployment Force excercise. Somalia, Sudan and Oman were also involved in the operation.

1981 – The Internation Monetary Fund approved a $5.8 billion load to India. It was the highest loan to date.

1982 – Sugar Ray Leonard retired from boxing. In 1984 Leonard came out of retirement to fight one more time before becoming a boxing commentator for NBC.

1984 – A bronze statue titled “Three Servicemen,” by Frederick Hart, was unveiled at the site of the Vietnam Veterans Memorial in Washington, DC.

1998 – A federal judge in New York approved the richest antitrust settlement in U.S. history. A leading brokerage firm was ordered to pay $1.03 billion to investors who had sued over price-rigging of Nasdaq stocks. 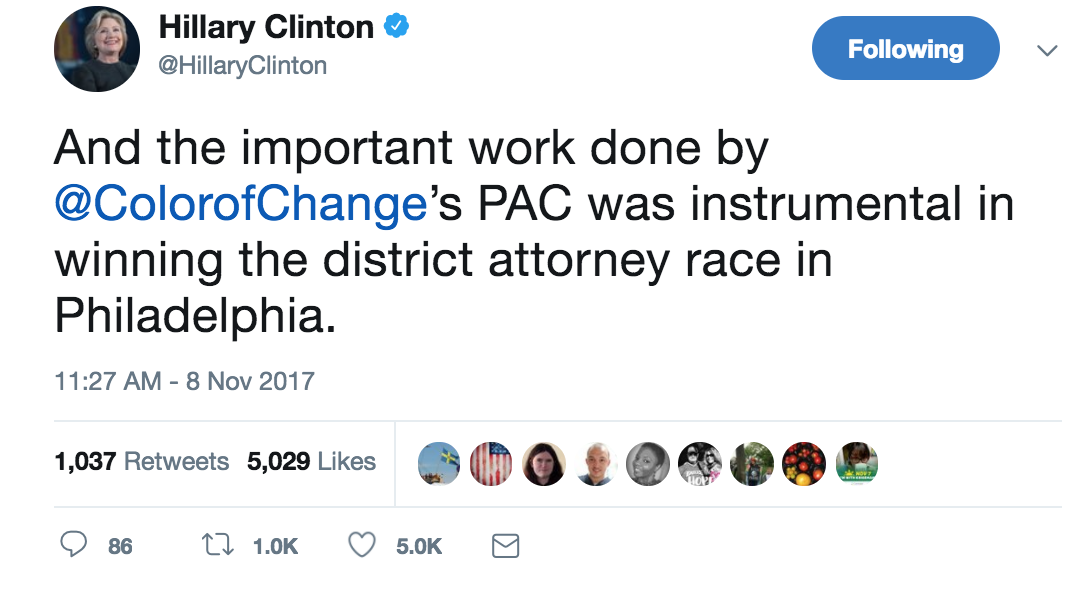 Krasner, who has defended Black Lives Matter activists in court, is on the record saying: 1

Larry Krasner gets it. And this is exactly the type of bold, transformative leadership we need if we’re going to fix America’s broken criminal justice system which unfairly targets Black folks and other people of color.

Color Of Change PAC helped Larry Krasner win. During the primary election, we mobilized and trained 50 volunteers in Philadelphia and held two text-a-thons in the city. Together we sent 100,000+ peer-to-peer text messages to Black voters in Philly asking them to vote for Krasner. And he won!

In 2018, we want to do this but at a much larger scale. Color of Change PAC has a plan to flip DA races across the country. Will you contribute?

With your donation we will:

…and so much more!

Black folks are 5x more likely to be incarcerated than white folks. Black women are imprisoned at the twice the rate of white women. Black children make up almost a third of all children arrested in the United States. Black people are unfairly targeted and over-incarcerated at every level! District Attorneys can help change this.2

District Attorney is one of the most powerful roles in our criminal justice system. They set prosecutor priorities and help shape sentencing. They can either choose to acknowledge that policing and prosecution are systematically racist, and commit to changing this reality – as Larry Krasner has – or run their offices like a sports league where all that matters is maximizing conviction counts

Please chip in $20.18 (or another amount) to help transform America’s criminal justice system.

Arisha, Jenni, Bhavik, and the rest of the Color Of Change PAC team