Just wanted to make sure you didn’t miss this very interesting news: The Target Corporation announced they’re raising their store minimum wage all the way to $15/hour by 2020.

Not just in Seattle. (We already won that!)

When fast-food workers with Working WA first went out on strike for $15, nobody really thought this is where we’d be just a few years later: one of the largest retailers in the country is choosing to raise wages to $15/hr nationwide. Every time you look, you see that this movement just keeps getting so much bigger, so much faster than anyone could have expected.

But it also raises a question: WHY did Target make this move? What do you think has gotten into them? 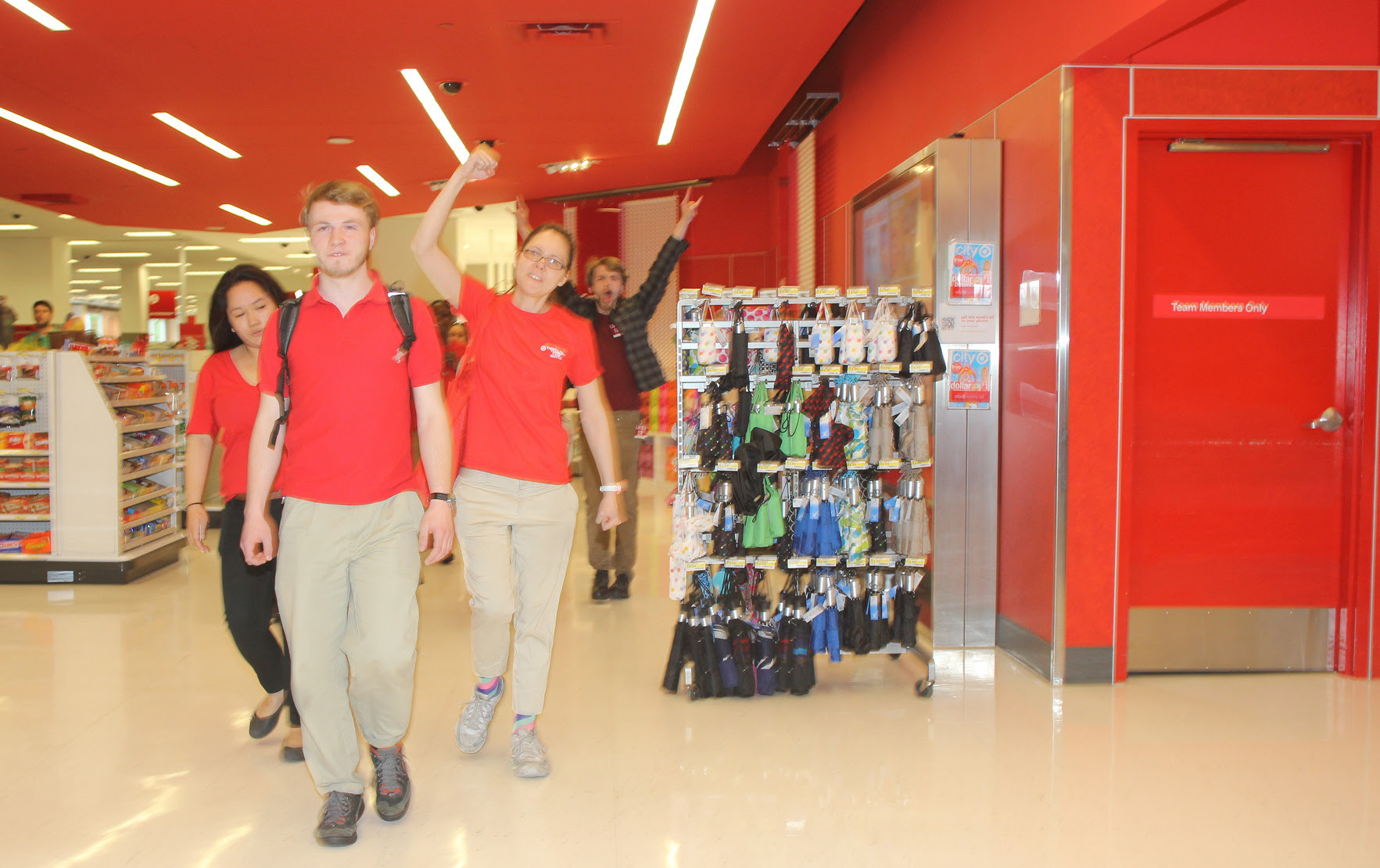 May 2014: Workers from the downtown Seattle Target walk out on strike for $15.

Why was Target happy to pay the minimum wage all this time, and now suddenly they’re lifting up the whole country?

Maybe they don’t really have a choice, because workers are refusing to settle for lower wages. Maybe they just figure higher wages are coming at this point and it’s inevitable. Maybe they’ve realized it’s GOOD for business when more people have more money.

Or maybe they just want the good PR?

Click here to tell us why YOU think Target is raising their wages to $15/hr.

Call me cynical, but even if it’s just a PR move, I think that’s a good thing! I think it’s incredible progress that the Fight for $15 has changed the landscape so dramatically that huge corporations like Target feel like they have to raise wages to get a good media hit. And as a supporter of Working Washington, you had more than a little bit to do with it.

It takes a movement to make change. And once we get moving, incredible things happen. If you haven’t already, now is a good time to donate and support the movement that helped make all this happen. Click here if you’d like to donate today and help us keep getting big wins like this for workers.

Thanks for being a part of it,
Working Washington

When Josh Mandel became Ohio’s Treasurer barely a year ago, he was entrusted to act as a responsible steward of the state’s funds. Mandel quickly violated that trust by failing to fulfill the responsibilities of his job so he could campaign for a Senate seat instead.

Mandel has also acted irresponsibly by flouting campaign finance rules. Questionable contributions made to his Senate campaign by employees of Suarez Corporation are now under investigation by the FBI. The suspicious nature of the donations was raised by the press to Mandel last year, as it was noted how unusual it was for multiple employees (and their spouses) of the same company, many whom have never before given to federal campaigns, to each make maximum donations to the same candidates. Yet Mandel refused to investigate the donations, and returned them only after the press reported on the existence of an FBI investigation.

And though he has now returned $105,000 in tainted donations, Mandel has yet to come clean. He refuses to identify when he became aware of the FBI investigation, how he learned of the investigation, and how long he waited before returning the donations. This is to say nothing of whether he knew that the contributions were illegal before they were made, and still chose to accept them anyway.

With the FBI investigating these contributions to Mandel’s campaign, Ohio voters are asking the same question: what is Josh Mandel hiding?

Mandel Donations From Company “Unusual.” According to the Toledo Blade, Josh Mandel reported some “unusual” donations on his second quarter finance report. Benjamin Suarez, owner of “a direct marketing company that does $100 million annually in sales” has been a major Republican donor. In the current cycle, however, “a large number of his employees and their wives — many of whom have never before given to federal campaigns — have contributed to two specific congressional candidates: Ohio Treasurer Josh Mandel, a Republican running for U.S. Senate, and U.S. Rep. Jim Renacci (R., Wadsworth), who represents Ohio’s 16th District. All together, 17 employees from Canton-based Suarez Corporation have contributed to one or both candidates, according to federal campaign filings. Sixteen of those employees (and six of their spouses) have given $5,000, the maximum amount allowed under federal election law. For some of the employees and their spouses, that adds up to $20,000. In all, Mr. Suarez, his employees, and their spouses gave $100,000 to Mr. Mandel’s campaign and $100,250 to Mr. Renacci’s campaign. [Toledo Blade, 8/19/11]

Mandel On Questionable Donations: “We Have No Reason To Believe” That Anyone Has Violated Law. In an interview with the Dayton Daily News, Mandel was asked about the questionable donations taken from Suarez Corporation employees. He stated that “We have no reason to believe whatsoever that anyone has stepped across the letter of the law or the spirit of the law here.” [Dayton Daily News, 10/2/11]

Mandel’s “Unusual Contributions” From Employees Of Suarez Corporation Prompted FBI Investigation For Possible Campaign Finance Violations. “Unusual contributions to the campaigns of U.S. Rep. Jim Renacci (R., Wadsworth) and Ohio Treasurer Josh Mandel have prompted a federal investigation. The U.S. Attorney’s Office in Cleveland requested fund-raising records from the treasurer of Mr. Renacci’s campaign four or five months ago, according to Mr. Renacci’s chief of staff, James Slepian. ‘We reiterate that to our knowledge no donations our campaign has received were made improperly, but if we find out these or any other donations were given improperly they will be returned immediately,’ Mr. Slepian said. A spokesman for Mr. Mandel’s U.S. Senate campaign also confirmed the investigation. ‘The campaign is aware of the investigation and is fully cooperating,’ said Travis Considine, spokesman for the Mandel campaign. ‘Neither the campaign nor anyone associated with it is a target of the investigation.” [Toledo Blade,5/21/12]

Maximum Contributions For Half Of The 16 Employees Represented Significant Portion Of The Value Of Their Homes, Including Some Who Had Never Before Contributed To A Political Campaign. “It is unusual, however, for those who have never contributed to a federal campaign to give the maximum allowable amount. Moreover, a review of publicly available Stark County auditor records shows that about half the employees who contributed to the two campaigns own homes valued at $66,000 to $183,000. Five own homes valued at more than $300,000. Mr. Suarez’s home is valued at $2.3 million.” [Toledo Blade, 5/21/12]

Mandel Returned $105,000 In Campaign Contributions To Suarez Corporation Employees In Wake Of FBI Investigation. “Ohio Treasurer Josh Mandel, the GOP candidate for the U.S. Senate, has returned $105,000 in campaign donations to 21 employees at a North Canton direct-marketing firm following reports that federal investigators sought records about contributions he and U.S. Rep. Jim Renacci received from the company. In a letter sent to Suarez Corporation Industries dated Tuesday, Mandel’s campaign treasurer Kathryn Kessler said, ‘We have decided to issue refunds for any contributions that appear to be under investigation by federal authorities.’ ‘We believe we have no reason to be concerned with the contribution, but out of an abundance of caution and until the investigation is complete, we believe this course of action is most appropriate,’ the letter said.” [Cleveland Plain Dealer, 5/23/12]

Mandel Would Not Say How Long He Had Been Aware Of FBI Investigation Into Suarez Corporation Contributions To His Campaign, Despite Refunding Contributions. “In a letter to the donors, Mr. Mandel’s campaign treasurer, Kathryn Kessler, said the campaign was refunding ‘any contributions that appear to be under investigation by federal authorities.’ ‘We believe we have no reason to be concerned with the contributions, but out of an abundance of caution and until the investigation is complete, we believe this course of action is most appropriate,’ Ms. Kessler’s letter said. Although the campaign provided a copy of the letter to The Blade, it would not explain the timing of the decision or how long it has been aware of the federal probe.” [Toledo Blade, 5/25/12]

President Of Suarez Corporation Called President Obama A “Communist,” Said FBI Investigation Was “Punishment” For Republican Donations And Was Disrupting Company Operations. “Benjamin Suarez, the president of Suarez Corp. Industries, said the FBI investigation of his employees’ contributions to two Republican candidates has significantly disrupted company operations, damaged employee morale, delayed the launch of five products and postponed the hiring of about 2,000 workers at SCI’s North Canton facility. Suarez said he has had to spend $500,000 to pay attorneys, rather than hire workers to assemble new products. ‘This FBI thing has totally disrupted our company,’ said Suarez. ‘This communist (President Barack) Obama says he’s all about jobs. Well, he’s killing jobs.’ He said that SCI, which is based in Jackson Township, has given federal investigators financial records and W-2 statements that, he says, proves his employees could afford to make the political contributions. ‘If this had been a regular investigation, this would have been dropped. They’re going to do everything in their power to coerce, every dirty trick in the book,’ he said. ‘This is punishment because we’re Republican donors.’” [Canton Repository, 5/24/12]

President Of Suarez Corporation Acknowledged That He Had Received Request From Mandel’s Campaign To Inquire With Employees About Contributions, But Denied Any Reimbursement. “Suarez, who said neither he nor the company reimbursed the employees for the contributions, said they were eager to give generously to Renacci and Mandel because they believed Obama’s policies, the uncertainty from his health care bill and his excessive federal regulations had hurt the economy, resulting in their loss in income. At the request of Renacci and Mandel’s campaigns, Suarez said, he called Giorgio and asked him to find out if any employees wanted to contribute to the campaigns. ‘I didn’t really know who donated until I saw the Toledo Blade story,’ Suarez said.” [Canton Repository, 5/24/12]