Washington, D.C. has more residents than the states of Vermont and Wyoming, yet it has no Congressional representation—a basic tenet of our democracy.

Voter suppression is a grave injustice throughout the country, but nowhere is it more explicit than in D.C. Hundreds of thousands of Americans have no real representation in a government that dictates their local laws, courts, and budget.

D.C.’s mayor Muriel Bowser calls this lack of representation and local control a disgrace, saying: “We are not asking for a handout—we are demanding our fundamental rights as American citizens, and the rights for which many of our residents have fought and died.”
Why haven’t we rectified this injustice? Well, it’s no coincidence that D.C. is 50% Black. This is classic voter suppression, and modern-day colonialism, which specifically marginalizes people of color.

DC Residents are:
50% Black & majority people of color.
More populous than Wyoming and Vermont, and close in population to 6 other states.
Overwhelmingly in support of statehood (86% of voters voted in favor in a 2016 referendum)
Include 30,000 active duty military members and veterans—but don’t even have a vote about whether we can enter into war.
After the end of slavery, formerly enslaved Black people fled to D.C., because its proximity to the federal government meant increased voting rights. Many Black people ran for office, and it became the Blackest city in America. In reaction, 200 years ago, racist members of Congress denied suffrage to D.C. residents, explicitly noting that they did so because D.C. was primarily Black.

Finally, D.C. statehood is getting the national attention it deserves. In September 2019, the House Oversight Committee held the first hearing on the issue in over 25 years, and Democratic federal officials have come out to overwhelmingly support it.
However, the old paternalistic rhetoric that D.C.’s Black residents were “unfit to govern” themselves, which led to stripping D.C. residents of their rights, is still in use today—by members of Congress who claim D.C. shouldn’t become a state because it can’t govern itself.

That’s why we have to come together as a country and prioritize D.C. statehood as a top civil rights issue.
Please sign the petition now to tell your elected leaders at all levels of government: We need to ensure D.C. residents get a voice in their government.

D.C. residents deserve the same rights every other American has. Instead, they:
Experience taxation without representation—paying more per capita in federal taxes than any other state.
Have one non-voting delegate in the House, but no voting Representatives or Senators that represent their interests.
Have long fought for their right to vote and for “home rule”—self-governance, or control over their local affairs.
Only won the right to vote for President in 1961.
Lack control of their own local laws.

Our Message to All U.S. government & community leaders:

Most Americans don’t know this outrageous fact: The 710,000 residents of Washington, D.C. are second-class citizens who lack equal Congressional representation.
This voter disenfranchisement is a racist affront to our democracy and our country’s struggles for civil and human rights. It’s past time to right this historic wrong by making D.C. a state.
Come out publicly in support of D.C. statehood. We need people across the country to raise awareness about and prioritize fixing this undemocratic injustice. D.C. residents deserve a voice in Congress and control over their own local laws.

Have been blocked by Congress from the implementation of laws D.C. has already passed with overwhelming local support, including: publicly subsidized abortion for low-income women, recreationally legal marijuana, assisted suicide, gun control laws, needle exchange programs in the midst of an HIV epidemic—all laws that disproportionately support D.C.’s residents of color.
Can’t control their own courts—instead, D.C.’s criminal justice system is operated by federal prosecutors appointed by the President. 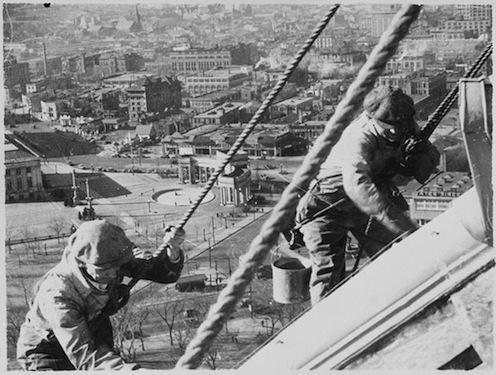 President Franklin D. Roosevelt unveiled the Civil Works Administration on November 8, 1933, and put one of the architects of the New Deal Harry L. Hopkins, in charge of the short-term agency. Roosevelt was convinced that jobs were much better for everyone than cash handouts.

The Civil Works Administration’s workers laid 12 million feet of sewer pipe and built or improved 255,000 miles of roads, 40,000 schools, 3,700 playgrounds, and nearly 1,000 airports (not to mention building 250,000 outhouses still badly needed in rural America).The program was praised by liberal Republican Alf Landon, who later ran against Roosevelt in the 1936 election.

An example of the effectiveness the Civil Works Administration is one county’s accomplishments: in less than five months, from November 1933 to March 1934. Grand Forks County, North Dakota put 2,392 unemployed workers on its payroll at a cost of about $250,000. When the Civil Works Administration began in eastern Connecticut, it could hire only 480 workers out of 1,500 who registered for jobs. Projects undertaken included work on city utility systems, public buildings, parks, and roads.

Photo: Workmen clean and paint the gold dome of Denver Capitol as part of the Civil Works Administration (U.S.