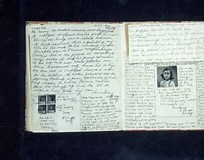 In 1952 the first American edition was published under the title Anne Frank: The Diary of a Young Girl ; it included an introduction by Eleanor Roosevelt. The work was eventually translated into more than 65 languages, and it was later adapted for the stage and screen. All proceeds went to a foundation established in Anne’s honour.

On June 16, 1858 more than 1,000 delegates met in the Springfield, Illinois, statehouse for the Republican State Convention. At 5:00 p.m. they chose Abraham Lincoln as their candidate for the U.S. Senate, running against Democrat Stephen A. Douglas. At 8:00 p.m. Lincoln delivered this address to his Republican colleagues in the Hall of Representatives. The title reflects part of the speech’s introduction, “A house divided against itself cannot stand,” a concept familiar to Lincoln’s audience as a statement by Jesus recorded in all three synoptic gospels (Matthew, Mark, Luke).

Even Lincoln’s friends regarded the speech as too radical for the occasion. His law partner, William H. Herndon, considered Lincoln as morally courageous but politically incorrect. Lincoln read the speech to him before delivering it, referring to the “house divided” language this way: “The proposition is indisputably true … and I will deliver it as written. I want to use some universally known figure, expressed in simple language as universally known, that it may strike home to the minds of men in order to rouse them to the peril of the times.”

The speech created many repercussions, giving Lincoln’s political opponent fresh ammunition. Herndon remarked, “when I saw Senator Douglas making such headway against Mr. Lincoln’s house divided speech I was nettled & irritable, and said to Mr. Lincoln one day this — ‘Mr. Lincoln — why in the world do you not say to Mr. Douglas, when he is making capitol out of your speech, — ‘Douglas why whine and complain to me because of that speech. I am not the author of it. God is. Go and whine and complain to Him for its revelation, and utterance.’ Mr. Lincoln looked at me one short quizzical moment, and replied ‘I can’t.'”

Reflecting on it several years later, Herndon said the speech did awaken the people, and despite Lincoln’s defeat, he thought the speech made him President. “Through logic inductively seen,” he said, “Lincoln as a statesman, and political philosopher, announced an eternal truth — not only as broad as America, but covers the world.”

Another colleague, Leonard Swett, said the speech defeated Lincoln in the Senate campaign. In 1866 he wrote to Herndon complaining, “Nothing could have been more unfortunate or inappropriate; it was saying first the wrong thing, yet he saw it was an abstract truth, but standing by the speech would ultimately find him in the right place.”

for the full speech and more information  … click or go to : abrahamlincolnonline.org