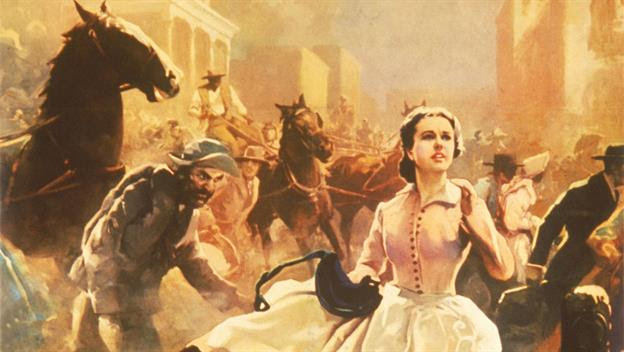 Margaret Mitchell’s Gone with the Wind, one of the best-selling novels of all time and the basis for a blockbuster 1939 movie, is published on this day in 1936.In 1926, Mitchell was forced to quit her job as a reporter at the Atlanta Journal to recover from a series of physical injuries. With too much time on her hands, Mitchell soon grew restless. Working on a Remington typewriter, a gift from her second husband, John R. Marsh, in their cramped one-bedroom apartment, Mitchell began telling the story of an Atlanta belle named Pansy O’Hara.In tracing Pansy’s tumultuous life from the antebellum South through the Civil War and into the Reconstruction era, Mitchell drew on the tales she had heard from her parents and other relatives, as well as from Confederate war veterans she had met as a young girl. While she was extremely secretive about her work, Mitchell eventually gave the manuscript to Harold Latham, an editor from New York’s MacMillan Publishing. Latham encouraged Mitchell to complete the novel, with one important change: the heroine’s name. Mitchell agreed to change it to Scarlett, now one of the most memorable names in the history of literature.

Published in 1936, Gone with the Wind caused a sensation in Atlanta and went on to sell millions of copies in the United States and throughout the world. While the book drew some criticism for its romanticized view of the Old South and its slaveholding elite, its epic tale of war, passion and loss captivated readers far and wide. By the time Mitchell won the Pulitzer Prize for Fiction in 1937, a movie project was already in the works. The film was produced by Hollywood giant David O. Selznick, who paid Mitchell a record-high $50,000 for the film rights to her book.

After testing hundreds of unknowns and big-name stars to play Scarlett, Selznick hired British actress Vivien Leigh days after filming began. Clark Gable was also on board as Rhett Butler, Scarlett’s dashing love interest. Plagued with problems on set, Gone with the Wind nonetheless became one of the highest-grossing and most acclaimed movies of all time, breaking box office records and winning nine Academy Awards out of 13 nominations.

Though she didn’t take part in the film adaptation of her book, Mitchell did attend its star-studded premiere in December 1939 in Atlanta. Tragically, she died just 10 years later, after she was struck by a speeding car while crossing Atlanta’s Peachtree Street. Scarlett, a relatively unmemorable sequel to Gone with the Wind written by Alexandra Ripley, was published in 1992.