By Fiza Pirani, The Atlanta Journal-Constitution 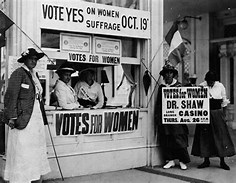 1. Not all women could actually vote after the 19th amendment was ratified.
The struggle for women’s suffrage did not end with the 19th Amendment’s ratification, especially for black women, who still faced barriers in some Southern states.

2. The 19th Amendment was drafted in 1878 by suffrage leaders Susan B. Anthony and Elizabeth Cady Stanton.
It was introduced to Congress that same year by California Sen. Aaron A. Sargent.

4. The vote came down to a tiebreaker.
Two-thirds of House and Senate members were required to vote “yes” for its ratification. On Aug. 18, 1920, Tennessee became the tie-breaker state in a 48-48 tie.

According to History.com, the decision fell to 23-year-old Republican Rep. Harry T. Burn, who opposed the amendment himself, but was convinced by his mother to approve it.

His mother reportedly wrote to her son: “Don’t forget to be a good boy and help Mrs. Catt put the ‘rat’ in ratification.”
5. More than 8 million American women voted for the first time in the November 1920 elections.

The convention is widely regarded as the start of the women’s rights movement in America.

“We hold these truths to be self-evident: that all men and women are created equal; that they are endowed by their Creator with certain inalienable rights; that among these are life, liberty, and the pursuit of happiness.”
8. Stanton and Anthony led several unsuccessful court challenges in the mid-1870s.

But because Supreme Court decisions rejected their argument, suffrage leaders combined efforts to advocate for a new consititutional amendment.

9. It wasn’t until 1869, when the Wyoming Territory gave women ages 21 and up the same voting rights as men, including state voting rights, that there was a major victory for women’s voting rights.

10. Wyoming was also the first state to elect a female governor and its state nickname is “the Equality State.”
According to History.com, Nellie Tayloe Ross was elected governor in 1924.

11. A woman named Carrie Chapman Catt was instrumental in the ratification of the 19th Amendment.
Catt, who in 1900 succeeded Anthony as the president of the National American Woman Suffrage Association (NAWSA), made the controversial decision to support the war effort in World War I, something her colleagues and supporters weren’t thrilled about.

Eventually, women’s help during the war gave them a more nationalistic reputation and in his 1918 State of the Union address, President Woodrow Wilson spoke in favor of women’s right to vote.
12. Delaware, Maryland, Virginia, Alabama, South Carolina, Georgia, Louisiana and Mississippi all rejected the amendment before finally ratifying it after Aug. 18, 1920.

16. The amendment overruled the 1875 Minor vs. Happersett case, granting women the right to vote.
In the case, a Missouri state court refused to register a woman as a lawful voter because state laws said only men were allowed to vote.

Read the full text of the 19th Amendment.