Originally known as the Woman’s Rights Convention, the Seneca Falls Convention fought for the social, civil, and religious rights of women. The meeting was held from July 19 to 20, 1848 at the Wesleyan Chapel in Seneca Falls, New York. 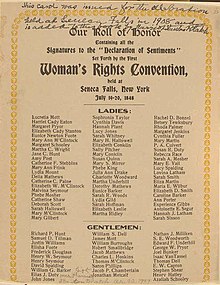 Despite scarce publicity, 300 people—mostly area residents—showed up. On the first day, only women were allowed to attend (the second day was open to men).

Elizabeth Cady Stanton, one of the meeting’s organizers, began with a speech on the convention’s goals and purpose:

“We are assembled to protest against a form of government, existing without the consent of the governed—to declare our right to be free as man is free, to be represented in the government which we are taxed to support, to have such disgraceful laws as give man the power to chastise and imprison his wife, to take the wages which she earns, the property which she inherits, and, in case of separation, the children of her love.”

The convention proceeded to discuss the 11 resolutions on women’s rights. All passed unanimously except for the ninth resolution, which demanded the right to vote for women. Stanton and African American abolitionist Frederick Douglass gave impassioned speeches in its defense before it eventually (and barely) passed.

The five women who organized the Seneca Falls Convention were also active in the abolitionist movement, which called for the emancipation of slaves and the end of racial discrimination. They included:

Stanton and Mott first met in London in 1840, where they were attending the World Anti-Slavery Convention with their husbands. When the convention excluded women delegates solely based on their sex, the pair resolved to hold a women’s rights convention.

Back in the United States, women’s rights reformers had already begun contending for women’s rights to speak out on moral and political issues beginning in the 1830s. Around the same time in New York, where Stanton lived, legal reformers had been discussing equality and challenging state laws prohibiting married women from owning property. By 1848, equal rights for women was a divisive issue.

In July of 1848, Stanton, frustrated with her role staying at home raising kids, convinced Mott, Wright and McClintock to help organize the Seneca Falls Convention and write its main manifesto, the Declaration of Sentiments.

Together, the five women drafted a notice to announce “a Convention to discuss the social, civic and religious condition and rights of Woman” around Hunt’s tea table.

The Declaration of Sentiments was the Seneca Falls Convention’s manifesto that described women’s grievances and demands. Written primarily by Elizabeth Cady Stanton, it called on women to fight for their Constitutionally guaranteed right to equality as U.S.

“We hold these truths to be self-evident; that all men and women are created equal,” the document stated. Inspired by the Declaration of Independence, the Declaration of Sentiments asserted women’s equality in politics, family, education, jobs, religion and morals.

The declaration began with 19 “abuses and usurpations” that were destined to destroy a woman’s “confidence in her own powers, to lessen her self-respect, and to make her willing to lead a dependent and abject life.”

Because women didn’t have the right to vote—a right given to “the most ignorant and degraded men”—they were forced to submit to laws to which they did not consent. Women were denied an education and issued an inferior role in the church.

Moreover, women were required to be obedient to their husbands and prevented from owning property, including the wages they earned (which technically belonged to their husbands). And they received unequal rights upon divorce.

In light of these abuses, the declaration called on women to “throw off such government.”

Next came a list of 11 resolutions, which  demanded women be regarded as men’s equal. The resolutions called on Americans to regard any laws that placed women in an inferior position to men as having “no force or authority.” They resolved for women to have equal rights within the church and equal access to jobs.

The ninth resolution was the most controversial, as it called women “to secure to themselves their sacred right to the elective franchise,” or the right to vote.

Although its passage led many women’s rights proponents to withdraw their support, the ninth resolution went on to become the cornerstone of the women’s suffrage movement.

REACTIONS TO THE SENECA FALLS CONVENTION

In New York and across the U.S., newspapers covered the convention, both in support and against its objectives.

Horace Greely, the influential editor of The New York Tribune, echoed the opinion of many people at the time. While skeptical of giving women the right to vote, he argued that if Americans really believed in the Constitution, women must attain equal rights:

“When a sincere republican is asked to say in sober earnest what adequate reason he can give, for refusing the demand of women to an equal participation with men in political rights, he must answer, None at all. However unwise and mistaken the demand, it is but the assertion of a natural right, and such must be conceded.”

THE FIGHT FOR WOMEN’S RIGHTS

Two weeks later, on August 2, 1848, the Seneca Falls Convention reconvened at the First Unitarian Church of Rochester, New York, to reaffirm the movement’s goals with a larger audience.

In the following years, the convention’s leaders continued to campaign for women’s rights at state and nationwide events. Reformers frequently referred to the Declaration of Sentiments as they campaigned for women’s rights.

Between 1848 and 1862, the participants of the Seneca Falls Convention used the Declaration of Sentiments to “employ agents, circulate tracts, petition the State and national Legislatures, and endeavor to enlist the pulpit and the press in our behalf.”

After 72 years of organized struggle, all American women finally achieved the same rights as men at the polling box when, in 1920, women won the right to vote with the passage of the Nineteenth Amendment to the U.S. Constitution.