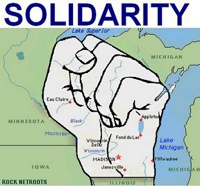 It’s time to show right-wing lawmakers that they cannot use budget gaps, created by their own massive giveaways to their corporate sponsors, as an excuse to attack Americans‘ fundamental rights.

The budget plan proposed by Wisconsin Governor Scott Walker and advanced by his Republican allies in the legislature which would rip away the collective bargaining rights of public workers is a shocking example of extreme overreach … it’s time to hold these people accountable!

In Wisconsin, voters can recall their state elected officials after they have been in office for a year. That means that Gov. Walker cannot be recalled until 2012, but eight of the GOP Senators who have pushed for passage of Walker’s plan are eligible for recall NOW — and the state Democrats have taken steps to begin the recall process.

First things first: Let us know you’re on board and sign our petition supporting the recall effort. http://site.pfaw.org/site/R?i=GbPmpmXeNOxyIYbTQmjhcQ..

This is not just about Wisconsin — it’s about right-wing power grabs and assaults Americans’ rights everywhere. If we can successfully recall these lawmakers in  Wisconsin, it will help set us up for similar recall efforts where they are possible in other states and, more importantly, it will make governors and legislators think twice about pushing such measures to begin with.

Show lawmakers in Wisconsin and all states that this type of overreach will not be taken sitting down.

P.S. This is going to be BIG and PFAW hopes to be a real force in this effort. That means we’ll need as many of our members and activists, from around the country, engaged in it.