– it’s been a busy week for all of us here at the Alliance!

We’re gearing up for the August 1 primary, and we’ve got plenty of election-related news to share with you today. Here’s what you need to know about the candidates we’re supporting, the upcoming voting deadlines and more:

We recently endorsed Jessyn Farrell for Seattle mayor. As a member of the Washington House of Representatives, Jessyn fought tirelessly for smarter, more comprehensive gun policies. And as mayor, she’ll seek creative solutions for implementing the kind of legislation that prevents tragedies. Read more about Jessyn here >>

With just nine days to go until polls close, we want to remind you to send in your ballot as soon as possible. You can still register to vote in person, but the deadline is tomorrow, July 24. If you’re a registered Washington voter, you should’ve already received your ballot in the mail – but if you haven’t, you can still pick one up at your local voting center. Finally, if you’re planning on dropping off your ballot in person on Primary Day – August 1 – you must do so before 8:00 p.m. Read more about voting in this year’s primary >>

In June, the Alliance for Gun Responsibility Foundation hosted a daylong Mental Health and Gun Violence Summit, where experts, legislators, mental health providers, public health employees and GVP advocates came together to brainstorm better ways to address the gun violence epidemic without further stigmatizing Americans living with mental illness. The discussion was candid, heartfelt and productive. Check out the problems and solutions we discussed >>

The Domestic Violence Unit of the Seattle City Attorney’s Office is finding innovative solutions for implementing existing firearm surrender laws and getting guns out of the hands of domestic abusers. Action like this empowers domestic violence survivors – and it will save lives. Read more about it here >>

If you haven’t already, we’d love for you to follow the Alliance and Foundation Facebook pages. That’s the best way to stay updated as we continue this all-important fight.

Lastly, we just wanted to thank you once again for your support. We wouldn’t be able to do any of this work without such an incredible, dedicated community behind us.

0326 – Constantine refused to carry out the traditional pagan sacrifices.

1394 – Charles VI of France issued a decree for the general expulsion of Jews from France.

1587 – Japanese strong-man Hideyoshi banned Christianity in Japan and ordered all Christians to leave.

1805 – Aaron Burr visited New Orleans with plans to establish a new country, with New Orleans as the capital city.

1854 – The paper collar was patented by Walter Hunt.

1861 – The Crittenden Resolution, which called for the American Civil War to be fought to preserve the Union and not for slavery, was passed by the U.S. Congress.

1866 – Ulysses S. Grant was named General of the Army. He was the first American officer to hold the rank.

1868 – The U.S. Congress passed an act creating the Wyoming Territory.

1907 – Korea became a protectorate of Japan.

1909 – French aviator Louis Bleriot flew across the English Channel in a monoplane. He traveled from Calais to Dover in 37 minutes. He was the first man to fly across the channel.

1914 – Russia declared that it would act to protect Serbian sovereignty.

1941 – The U.S. government froze all Japanese and Chinese assets.

1943 – Italian Fascist dictator Benito Mussolini was overthrown in a coup.

1946 – The U.S. detonated an atomic bomb at Bikini Atoll in the Pacific. It was the first underwater test of the device.

1952 – Puerto Rico became a self-governing commonwealth of the U.S.

1978 – Louise Joy Brown, the first test-tube baby, was born in Oldham, England. She had been conceived through in-vitro fertilization.

1978 – Pete Rose (Cincinnati Red) broke the National League record for consecutive base hits as he got a hit in 38 straight games.

1984 – Soviet cosmonaut Svetlana Savitskaya became the first woman to walk in space. She was aboard the orbiting space station Salyut 7.

1987 – The Salt Lake City Trappers set a professional baseball record as the team won its 29th game in a row. (Utah)

1994 – Israel and Jordan formally ended the state of war that had existed between them since 1948.

1997 – K.R. Narayanan became India’s president. He was the first member of the Dalits caste to do so.

1998 – The USS Harry S. Truman was commissioned and put into service by the U.S. Navy.

BossFeed Briefing for June 24, 2017. Last Tuesday, Uber began to allow in-app tipping nationwide. Last Wednesday, the public got word of the death of Betty Dukes, the Walmart greeter who led a landmark class-action gender discrimination lawsuit against the giant retailer. And tomorrow, the U.S. Senate might or might not vote on one or another bill which could or could not repeal Obamacare with or without replacing it. 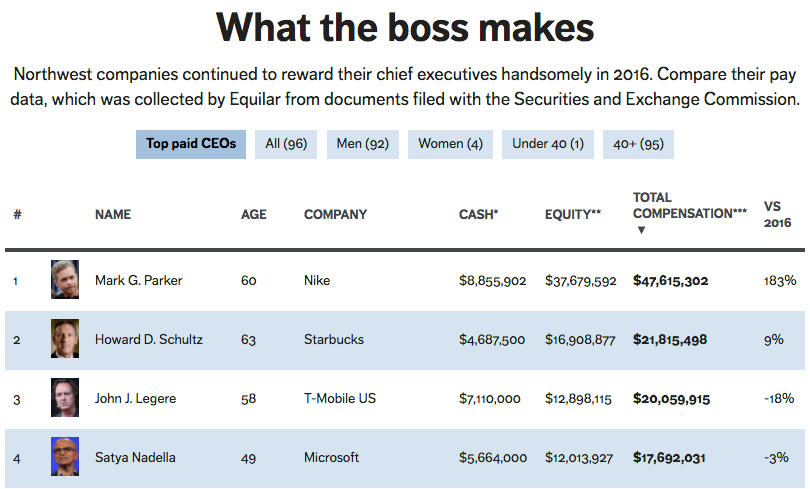 Fast food striker and Working Washington leader Crystal Thompson wrote in The Stranger about her lived experience fighting for $15/hour, and then getting it in her paycheck. Her income is up, her chain is expanding, and she’s thinking about going back to school and maybe even taking a vacation someday.

85% of gig economy workers applying for loans make $500 or less per month from these jobs, according to one new survey. More than half take in less than $100/month, and of course most have other jobs too.

President Trump’s two nominees to serve on the National Labor Relations Board are likely to be confirmed by the Senate and sworn into office shortly. They are then expected to reverse several key workers’ rights decisions, including a goundbreaking ruling that franchisors could be held responsible for working conditions at their chains.

And what percent of them think $15/hour is too much? The average CEO of a public company in the Northwest was paid $3.6 million last year. Seventy-six percent of CEOs and their board members believe that’s “the correct level” of pay.

Can you imagine anything that would take more strength? It was really hard and scary and apparently nightmare-inducing when the CEO of Box turned down a $600 million offer for his company. At one point some people were critical and there was a long meeting or two and it was all very difficult and once the company even had take out some loans.

More than 5,000 agricultural workers died on the job in the U.S. from 2003 – 2011, and according to OSHA there’s been a “dramatic spike” in fatalities since then. Audrey Dutton’s compelling look at farmworker health & safety conditions, originally written for the Idaho Statesman, looks at why agriculture is one of the most dangerous industries out there, with hazards including heavy equipment, heat stroke, chemical exposure, and even manure lagoons, which present a particularly gruesome risk of drowning. Growing concerns about immigration enforcement are an added hazard compounding the other risks, as are rules which forbid federal heath & safety inspections of farms with 10 or fewer employees, even in the event somebody dies on the job. 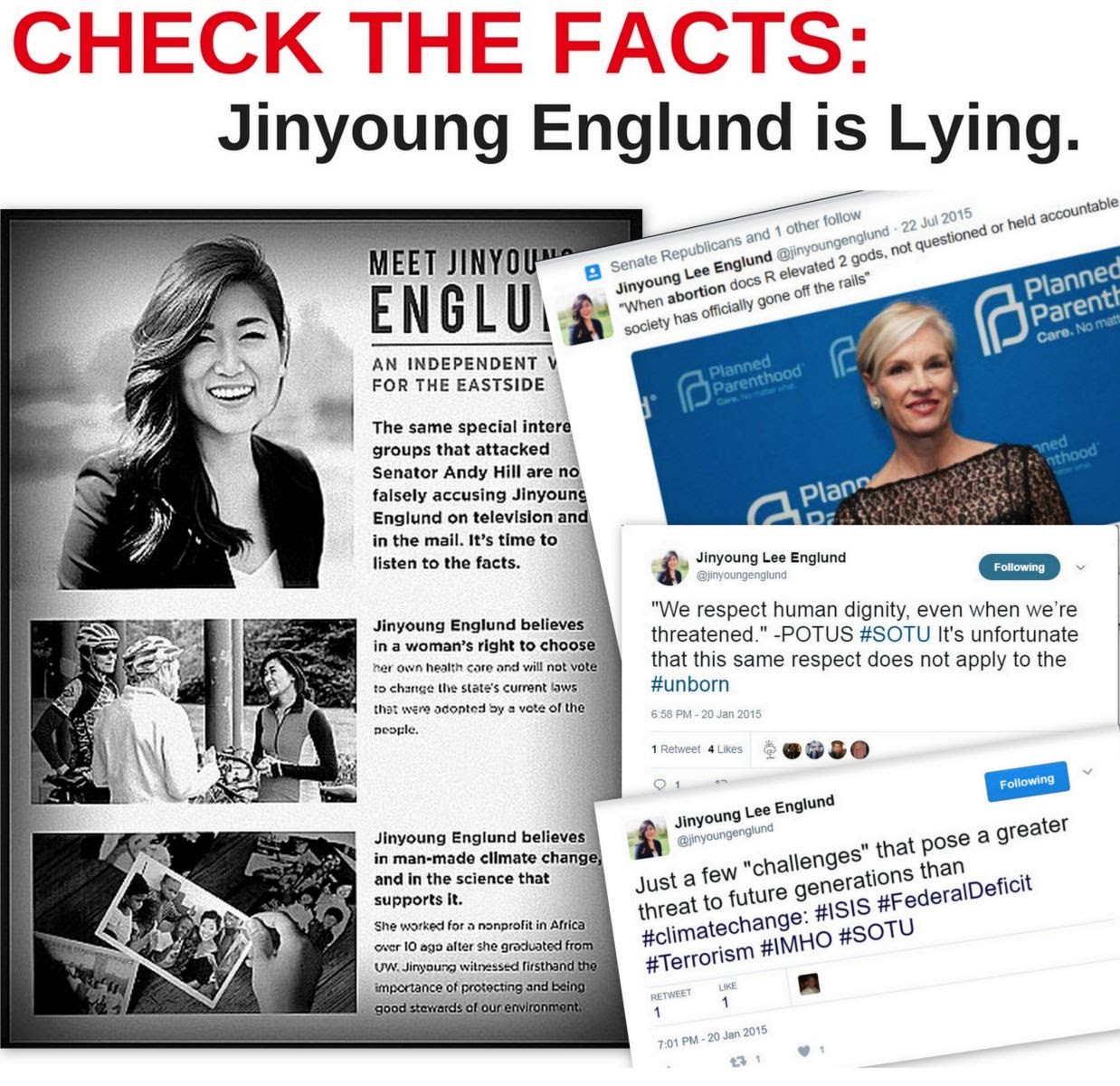 Thought Republicans couldn’t sink any lower? They just did.

Jinyoung Englund, the Republican running for state Senate against Democrat Manka Dhingra in the 45th Legislative District, has sent out mailers that flat-out lie about her positions. She’s hiding her extreme view from Washington voters!

The 45th District election is no ordinary election; it will determine control of the Senate. If voters buy Englund’s lies, Democrats will lose — and we’ll be facing years of continued Republican obstruction in Olympia.

Don’t let Englund and the GOP get away with their lies. Pitch in to our Rapid Response Fund to help us EXPOSE Englund and ELECT Manka Dhingra and other great Democrats!

As Englund’s own words show, she is lying about her positions on reproductive rights and climate change. This is a candidate so extreme that she received a “Future Leader” award from a Ted Cruz super PAC — but now she’s pretending to be “centrist” and “reasonable.”

We can’t let her get away with it. The state Senate and Governor Inslee’s entire progressive agenda hang in the balance.

Up and down the ticket, from Donald Trump to Jinyoung Englund, Republicans are counting on “alternative facts” and lying to voters to help them win. We need to counter their lies with the truth about their record and their positions. Your donation to our Rapid Response Fund will allow us to strike back and expose the lies. Will you pitch in before it’s too late?

In the last 48 hours, Senate Republicans moved from nearly giving up on Trumpcare to cutting deals for its passage. As we’ve seen time and time again, no deals or tweaks can make Trumpcare better. Yesterday, the Congressional Budget Office released a new score for the tweaked BCRA; which confirmed 22 million people will still lose their health care.

Senate Republicans are offering $200 billion to Senators from Medicaid expansion states to trick them into supporting a health care repeal bill that slashes $756 billion from the program. The bribe doesn’t come close to making-up for the drastic cuts to Medicaid. As Aviva Aron-Dine, a senior fellow at the Center on Budget and Policy Priorities, told the Huffington Post’s Jonathan Cohn, “It’s only going to be more expensive to cover these people through private plans with a wrap. So you’re talking about covering a minority of the expansion population at best.”

Despite not even knowing what bill they’re trying to pass, they’re aiming to vote on a motion to proceed that would start debate on Trumpcare Tuesday. If Senate Republicans pass their motion, a series of votes that decide between the health of Americans and the wealthy few will follow.

Sen. Dick Durbin (D-IL) and Lindsey Graham (R-SC) introduced the Dream Act of 2017, which would grant legal status and establish a path to citizenship for DREAMers. Eight out of ten voters, including more than 7 in 10 Republicans, believe DREAMers should be allowed to remain in the US legally. Ending DACA would result in a loss of $460.3 billion from the national GDP over the next 10 years, and remove an estimated 685,000 workers from the nation’s economy. Attorneys general from 19 states plus DC signed a letter to President Trump asking him to protect and preserve DACA — they understand that it’s about the lives of the 787,580 beneficiaries deferred action protects, as well as our nation as a whole. “The consequences of rescinding DACA would be severe, not just for the hundreds of thousands of young people who rely on the program — and for their employers, schools, universities, and families — but for the country’s economy as a whole,” the attorneys general write.

#RipOffClause. The Consumer Financial Protection Bureau (CFPB) issued its final rule prohibiting class action bans in forced arbitration clauses in consumer financial contracts.  The rule restores our day in court for widespread violations of the law. Forced arbitration simply gives companies a license to steal. One example:Wells Fargo allegedly committed fraud by creating millions of fake accounts and then told its customers: “Too bad, you can’t have your day in court.” Although the CFPB rule is final, our work has just begun. Conservatives plan to repeal the CFPB arbitration rule under the CRA with a vote in the House as soon as Tuesday.