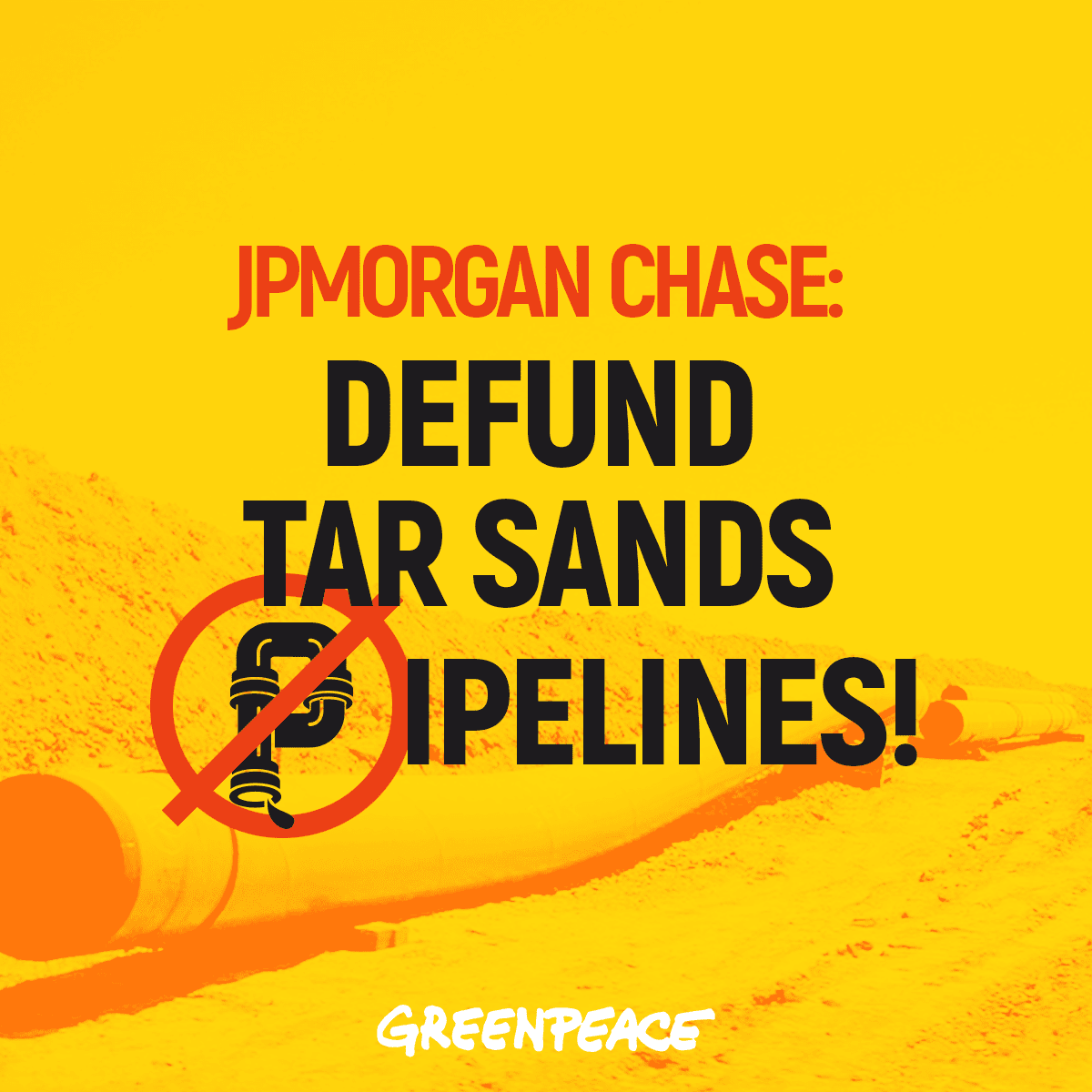 Tar sands oil is one of the dirtiest fuels out there — and pipelines like Keystone XL will carry this oil across the U.S., threatening hundreds of communities along their routes. But we CAN stop these pipeline projects by going after their funding.

That’s why we’re asking you, during the Summer of Resistance, to help us reach our goal of sending 50,000 letters to JPMorgan Chase — so we can show them that each individual voice matters and we will RESIST their attempts to promote dirty energy.

We stand in solidarity with the Indigenous leaders campaigning to stop banks from funding these disastrous projects that tread on the rights of sovereign Indigenous nations.

These projects also tread on the rights of private landowners, threaten communities with horrific spills, and risk locking us into catastrophic climate change.

Tar sands pipelines are built to benefit private companies — while communities and the planet suffer. Institutions like JPMorgan Chase should know that when they fund projects that harm communities, they risk significant material and reputational damage. So we’re putting them on notice.

The public outcry against tar sands pipeline funding is already making a difference. This month, Desjardins, the largest association of credit unions in North America, announced a freeze on funding for ALL oil pipelines. International investment banking giants, including ING, have also publicly committed to not fund tar sands pipelines. Now we need major U.S. banks like JPMorgan Chase to do the same.

Ask JPMorgan Chase to do the right thing and end all funding for tar sands oil pipelines today!

P.S. These pipelines are being built against the wishes of Indigenous tribes, communities, and private landowners, putting their safety and futures at risk. Tell JPMorgan Chase to stand with the people and planet and end funding for dangerous tar sands oil pipelines!

There’s been a whole lot written about that ridiculous anti-minimum wage study that came out a few weeks ago, but here’s something you probably HAVEN’T seen: what workers have to say about it. 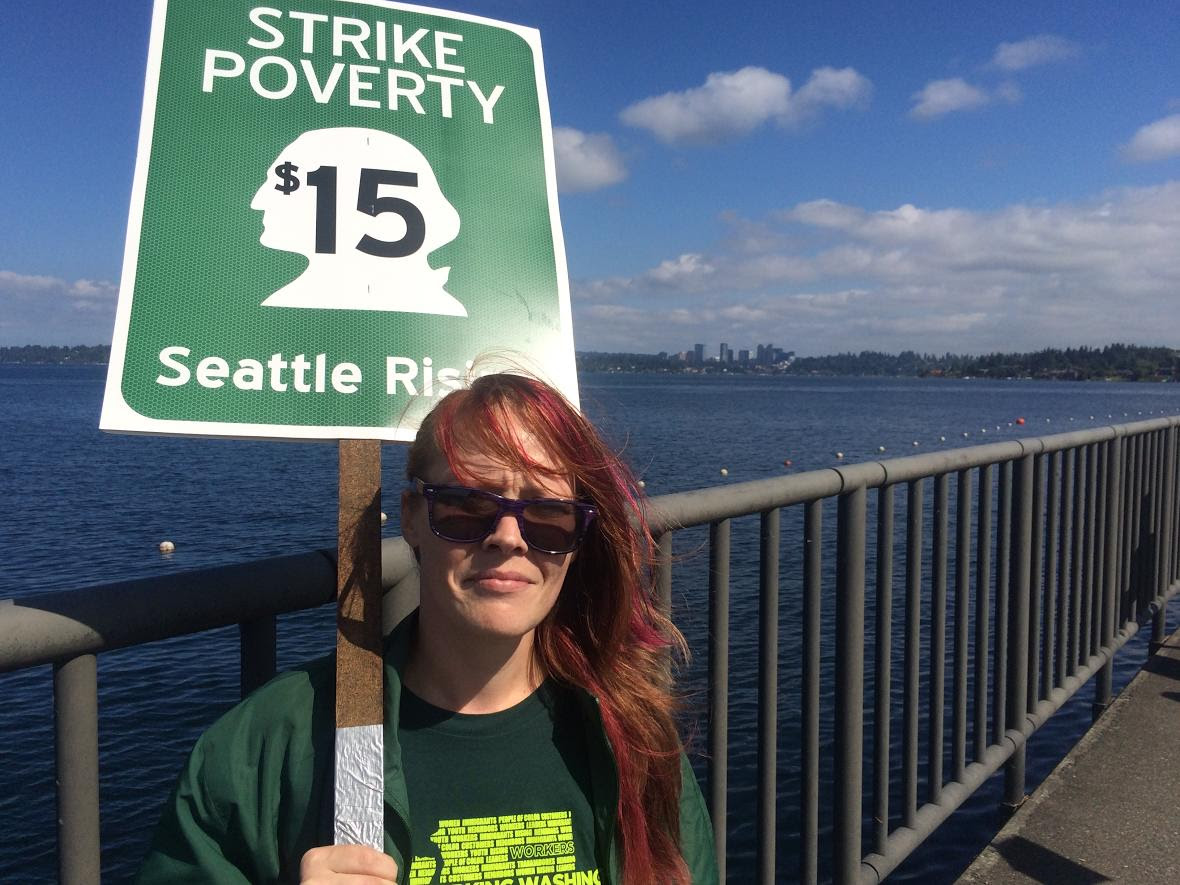 “I keep on seeing news about this report that says workers in Seattle are hurt by the $15 minimum wage. But I’m a worker in Seattle, I’m making $15 now — and that report sure doesn’t look like my life.”

Click here to read Crystal’s guest editorial in The Stranger about what the minimum wage increase has meant for her.

P.S. Want more background on how that anti-minimum wage study got things so wrong? Click here to learn more.

1376 – The legend of the Pied Piper of Hamelin leading rats out of town is said to have occurred on this date.

1587 – A second English colony was established on Roanoke Island off North Carolina. The colony vanished under mysterious circumstances.

1798 – The USS Constitution was underway and out to sea for the first time since being launched on October 21, 1797.

1812 – English troops under the Duke of Wellington defeated the French at the Battle of Salamanca in Spain.

1926 – Babe Ruth caught a baseball at Mitchell Field in New York. The ball had been dropped from an airplane flying at 250 feet.

1941 – Plans for the Pentagon were presented to the House Subcommittee on Appropriations.

1955 – U.S. Vice-President Richard M. Nixon chaired a cabinet meeting in Washington, DC. It was the first time that a Vice-President had carried out the task.

1987 – The U.S. began its policy of escorting re-flagged Kuwaiti tankers up and down the Persian Gulf to protect them from possible attack by Iran.

2000 – Astronomers at the University of Arizona announced that they had found a 17th moon orbiting Jupiter.

2003 – In northern Iraq, Saddam Hussein’s sons Odai and Qusai died after a gunfight with U.S. forces.

2004 – The September 11 commission’s final report was released. The 575-page report concluded that hijackers exploited “deep institutional failings within our government.” The report was released to White House officials the day before.

2009 – The longest total solar eclipse of the 21st century, lasting up to 6 minutes and 38.8 seconds, occurred over parts of Asia and the Pacific Ocean.

According the the U.S. Fish and Wildlife Service, bees are in “a race against extinction.”[1]

The rusty patched bumblebee is now on the endangered species list.

This news stings — but it should send us all BUZZING into action. We MUST work together to save these incredible creatures.

Bees play a much-overlooked — but essential — role in our ecosystem.

These tiny creatures are responsible for pollinating our crops and supporting necessary plant growth for natural food chains.

Without them, our food supplies will dwindle and our ecosystems will fall apart. This is an important matter to all of us.

we need your help right away. Please add your name to help save bees facing extinction: