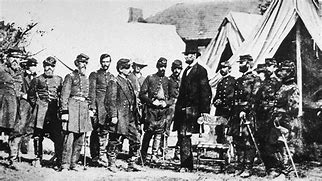 1862, Abraham Lincoln did something unprecedented in presidential history up to that point: he met with a small delegation of black leaders (all free: 5 black clergymen). But the meeting did not auger a decision to give African Americans a voice in government. In essence, Lincoln sought to lobby these men, in essence, to agree to a divorce. In other words, the President wanted to get black Americans behind his plan to colonize them abroad. –