Dorothy Height: a civil rights heroine, educator and social activist ; She was a woman who had her finger print on all things American and as the President said,” deserves a place in our history”.    3/24/1912 – 4/20/2010

Neal Keny-Guyer, Mercy Corps
Syria‘s civil war is poised to become the worst humanitarian disaster of our time.  The politics are complex and the numbers can be overwhelming.  But those numbers stand for real people in crisis, right now.  And the more of us who are aware of what’s going on, the more we can help them.
We hope you’ll take a minute to learn about the magnitude of the Syrian refugee crisis ▸

As the violence in Syria escalates, as many as 6,000 people escape across the borders every single day. The UN estimates there could be 3.5 million refugees by the end of the year — more than half of them children.
Visit our website to see more infographics and get the quick facts about the crisis ▸
Mercy Corps is responding to urgent needs in Jordan and Lebanon — the two smallest countries overwhelmed by the largest numbers of refugees.  But we must do more.  Please, join us to raise awareness and turn knowledge into action.
Thank you for standing with us — and the millions of Syrian refugees who need us now more than ever.
Sincerely, 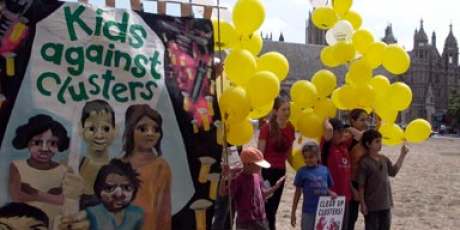 Ahmad picked up a bright metal object in a park where he was celebrating his 5th birthday in Lebanon. It was an unexploded cluster bomblet, which blew up in his face, killing him slowly in front of his family.

Three years ago, public pressure pushed through a ban of these cruel bombs. But now the US is lobbying nations to quietly sign a new law that allows their use — signing the death warrant for thousands of other children. Most countries are still on the fence on how to vote. Only if we raise the alarm across the world can we shame our governments to block this deadly decision.

Positions are being drawn up now. We only have days until countries meet to send our leaders a clear message: stand up for the cluster bombs ban and keep our children safe. Click below to sign the petition — it will be delivered directly to delegates at the Geneva conference:

Thousands of people — many of them children — have been maimed or killed by these bombs. When they are fired, they spray small “bomblets” over a wide area, many of which fail to explode. Years later, people disturb them in their fields or school playgrounds not knowing what they are, and they explode.

In 2008, over half of the world’s governments outlawed these weapons by signing the Convention on Cluster Munitions. But now, shockingly, countries like France, Germany, Italy, Sweden and the UK, who all signed the Convention, are under pressure from the US, China and Russia to run rings round the ban by signing a separate agreement that would allow them to use cluster munitions. Only Norway, Mexico, Austria and a few others are fighting this horror.

Negotiators at the Convention on Conventional Weapons meet in Geneva next week. Most governments don’t really want this protocol and have not said which way they will vote, but they are under severe pressure from the US to comply and will only object if the global public persuades them.

There’s no time to lose — the conference starts on Monday. Let’s call on our governments to reject this deadly and cynical US campaign to legalize cluster killing. Click below to sign the petition and forward this email widely — we’ve done it before, let’s do it again:

Cluster bombs and land mines were banned because citizens raised the alarm across the world — with victims and survivors leading the way. For their sakes and to ensure no more lives are lost, let’s not allow these cruel weapons back and join together now to demand a more peaceful world.

The Past and Future of the CCW (Arms Control.org):
http://www.armscontrol.org/act/2011_03/LookingBack

Raed Mokaled and the story of Ahmad (Handicap International):
http://www.handicapinternational.be/en/raed-mokaled