We wanted to share some really good news for consumers about health care costs so that you can also help to get out the word.

First, health insurance premium rebates, which average nearly $100 per family, are on their way to 8.5 million Americans. That is because the Affordable Care Act now holds health insurance companies accountable to consumers and ensures that American families receive value for their premium dollars. If an insurance company spends less than 80 percent (85 percent in the large group market) of your premium on medical care and efforts to improve the quality of care and instead spends it on overhead and corporate salaries, they must rebate the portion of premium that exceeded this limit. Thanks to the law, millions of Americans will get savings from their insurers.

The law is protecting consumers from rate hikes that don’t go to care. It, along with other provision of the Affordable Care Act, has already helped consumers save a total of $3.9 billion in 2012, and $5 billion counting the 2011 rebates.

Second, Americans know health care prices for decades were skyrocketing, but the health law is changing that. This week, we learned that the official measure of health care prices, the medical price index, fell in May. The average for the last year was the lowest it has been in over four decades — a sign that health care is getting more affordable.

And third, a new report demonstrates this good news will continue.  A new PriceWaterhouseCooper report projects that medical cost growth will be lower in 2014 than in 2013. As they say: “defying historical patterns.” The report points to how the ACA, though its policies to promote value, reduce unnecessary care, and cut waste from the system, is driving down the cost of health care for all of us.

Meanwhile, we received a number of questions in response to our last email. Here are a couple answers:

If the pre-existing limitations are no longer allowed can an insurance company still decline to cover an applicant?

No. No new applicants may be denied coverage due to a pre-existing condition starting in 2014, and permanently thereafter. Insurance companies will also be prohibited from charging more or carving out health benefits due to a pre-existing. Charging women more will become a thing of the past. And you won’t pay more based on the type of work you do or your family’s health history.

How does the ACA help people on Medicare?

People with Medicare now have free checkups and preventive services – you don’t have to be sick to see your doctor to stay healthy. They have a new discount on their prescription medicine in the so-called “donut hole” that’s already saved over six million seniors more than $700 each. The increases in their monthly Medicare premiums, like those for private insurance, have slowed down – with the Medicare Trustees projecting that they may actually drop in 2014. And, the part of the law that prevents insurance companies from spending premium dollars on overhead not care will begin in the Medicare Advantage next year, thanks to the Affordable Care Act.

We’ll tackle more of your questions in future emails, so be sure to let us know what’s on your mind.

Stunning Natural Bridges and Arches
John A. Roebling and Joseph Strauss designed impressive spans in their time, but Mother Nature has engineered some equally awe-inspiring structures… 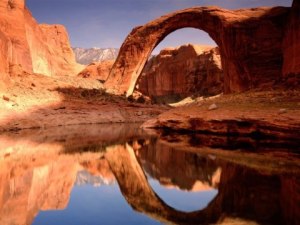 The First Lady joins Maryland Governor Martin O’Malley for a formal bill signing ceremony at the Maryland state house. The legislation will make it easier for military spouses to transfer their licenses when they move from state to state, and it will require licensing units and public institutions of higher education to consider relevant military experience and training for licenses, credentials and academic credit.

In just a few weeks, medical residents at the University of Washington will begin their fall rotations, studying new topics and performing new procedures. Unfortunately, they’ll be using cruel and outdated training methods to do so.

Students at UW still learn how to insert breathing tubes in human infants using live ferrets instead of simulators.

Here’s what happens: Students push breathing tubes down the throats of live ferrets to practice intubation. Each ferret is subjected to the process repeatedly, experiencing pain, bruising, bleeding, and even death.

More than 90 percent of U.S. pediatrics programs have moved from abusing animals to relying on simulators — an option that has been proven to be more effective for teaching.

Join the Physicians Committee for Responsible Medicine (PCRM) in urging University of Washington President Michael Young and the UW School of Medicine to stop using ferrets in its pediatrics program. >>    http://www.change.org/petitions/stop-university-of-washingtons-cruel-ferret-lab-3?utm_source=action_alert&utm_medium=email&alert_id=NNSacSzXig_zLjAKpCEDe

The use of ferrets in pediatric training is cruel and unnecessary. These ferrets suffer needlessly in the short-term — and medical students receive inferior training that affects their abilities as physicians in the long-term.

According to experts at PCRM, “Simulators approved by the American Academy of Pediatrics actually provide a better training experience – they’re humane, they can be used over and over again to aid learning, and they’re specifically designed to mimic the anatomy of newborns and infants.”

August is the perfect time to push for policy change before the new school year starts.

Several weeks ago, the Physicians Committee for Responsible Medicine filed an animal cruelty complaint against the university with the county prosecutor, increasing pressure on UW officials.

Plus, University of Washington President Michael Young has only been at the university for a month. He is still likely to be receptive to reviewing and updating policies.

If Young commits to switching the pediatrics program to using simulators before the next classes of students and residents begin training, 2011-2012 could be a cruelty-free school year for UW’s pediatric residency program.

Sign here to ask UW to end the practice of animal cruelty in its pediatrics program and begin offering more modern methods of training to its medical students and residents:

– Patrick and the Change.org team