Senate Minority Leader Mitch McConnell (R-KY) just laid out the GOP strategy if it takes over the Senate. In short: if you think conservative obstruction is grinding Congress to a halt right now, you ain’t seen nothing yet.

Mitch McConnell has a game plan to confront President Barack Obama with a stark choice next year: Accept bills reining in the administration’s policies or veto them and risk a government shutdown.

In an extensive interview here, the typically reserved McConnell laid out his clearest thinking yet of how he would lead the Senate if Republicans gain control of the chamber. The emerging strategy: Attach riders to spending bills that would limit Obama policies on everything from the environment to health care, consider using an arcane budget tactic to circumvent Democratic filibusters and force the president to “move to the center” if he wants to get any new legislation through Congress.

In short, it’s a recipe for a confrontational end to the Obama presidency.

“We’re going to pass spending bills, and they’re going to have a lot of restrictions on the activities of the bureaucracy,” McConnell said in an interview aboard his campaign bus traveling through Western Kentucky coal country. “That’s something he won’t like, but that will be done. I guarantee it.”

It appears McConnell, who proudly called himself the “guardian of gridlock,” would take things to a whole new level if he takes control of the Senate chamber: use the threat of a shutdown in a proactive effort to undo the progress that we have made when it comes to health care, the environment, and more. There is little else that could be as destructive. Remember what happened last year when conservative opposition led to the first government shutdown in almost 20 years? The results were not pretty:

At the same time, a media narrative seems to be forming that during this primary season the GOP’s “establishment” candidates (with the exception of Eric Cantor) are fending off the Tea Party and winning their elections. Senator Lindsey Graham of South Carolina. Rep. Cory Gardner of Colorado. And last night, Attorney General Dan Sullivan of Alaska. The reality is that “establishment” candidates still push for radical, out-of-touch policies: supporting an amendment to ban abortion and even some common forms of contraception; refusing to acknowledge man-made climate change; opposing marriage equality. And Mitch McConnell’s plan to shut down the government again belongs at the top of the list.

BOTTOM LINE: Mitch McConnell has made the GOP plan if it takes over the Senate clear: force a government shutdown. The last shutdown caused major damage to our economy, but that doesn’t seem to bother McConnell and Republicans. McConnell isn’t in it to help Kentucky or the country; he wants only to block President Obama and progress wherever he can. 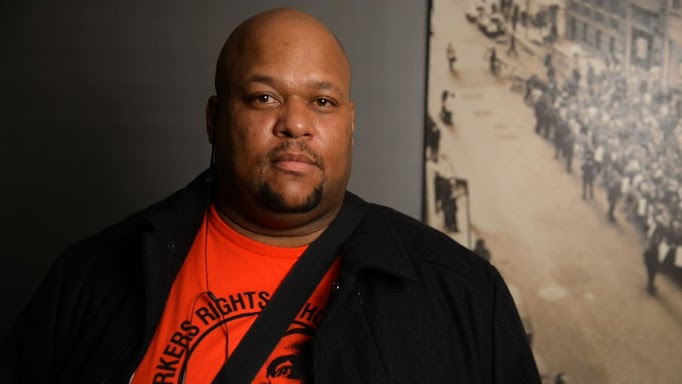 What gets you fired from Cablevision, using the N-word, or saying the word ‘slavery’? If you’re a union supporter like Jerome, apparently saying the word slavery is the real crime.

Three years ago, Jerome and his co-workers started trying to build a union at Cablevision and voted to join the CWA. Instead of good-faith bargaining, Cablevision have met them with intimidation and harassment and the illegal firing of 22 workers. Now, Cablevision has fired Jerome for saying that just like slavery is a stain on America, Cablevision’s unfair treatment of the Brooklyn workers and union-busting is a stain on their new brand.

Join Working Families, CWA and the Black Institute to pressure Cablevision to hire Jerome back and bargain fairly for a fair contract!

President Obama spoke to service men and women at MacDill Air Force Base yesterday about the U.S. strategy to degrade and ultimately destroy ISIL — a terrorist organization that is killing innocent, unarmed civilians in both Iraq and Syria. ISIL, also known as ISIS or the Islamic State, is also responsible for the brutal murders of American journalists Jim Foley and Steven Sotloff.

Here are the key points the President made yesterday regarding ISIL and our strategy to defeat their forces:

1. ISIL is threatening America and our allies.

Our intelligence community has not yet detected specific plots from ISIL against our homeland, but they have repeatedly threatened our core interests, including our personnel, our embassies, our consulates, and our facilities in Iraq, Syria, and in the broader Middle East. “If left unchecked, they could pose a growing threat to the United States,” he said.

2. The U.S. continues to conduct targeted airstrikes against ISIL.

The U.S. Air Force has conducted more than 160 airstrikes against ISIL, successfully protecting our personnel and facilities, killing ISIL fighters, and giving space for Iraqi and Kurdish forces to reclaim key territory. “They’ve helped our partners on the ground break ISIL sieges; helped rescue civilians cornered on a mountain; helped save the lives of thousands of innocent men, women and children,” the President said.

3. American forces that have been deployed to Iraq do not and will not have a combat mission.

“As your Commander-in-Chief, I will not commit you, and the rest of our Armed Forces, to fighting another ground war in Iraq,” the President told servicemembers. Along with our airstrikes, U.S. forces will train, equip, advise, and assist local partners on the ground “so that they can secure their own countries’ futures.”

4. This is not and will not be America’s fight alone.

The U.S. will lead a broad coalition of countries who have a stake in this fight. France and the UK are already flying with us over Iraq, and other countries have committed to join this effort. Saudi Arabia has agreed to host American efforts to train and equip Syrian opposition forces. Australia and Canada are going to send military advisors to Iraq, while Germany is sending paratroopers to help offer training. Arab nations have agreed to strengthen their support for Iraq’s new government, a key ally in our strategy to defeat ISIL.

International partners will help us cut off ISIL funding, gather intelligence, and prevent foreign fighters from entering — or leaving — the Middle East. And nearly 30 nations have joined American humanitarian relief to help civilians, including Sunni, Shia, Christian, Yezidi, or other religious minorities, that ISIL has driven from their homes.

5. Congress should provide the authorities and resources the U.S. military needs to succeed.

The President has called on Congress to support our military with the necessary resources to train and equip Syrian opposition fighters. As he has said, America’s leadership position is strongest when the President and Congress work together and show a united front.

“Sending our servicemembers into harm’s way is not a decision I ever take lightly,” the President said. “It is the hardest decision I make as President. Nothing else comes close.”

But this strategy will require the best military force in the world:

Frankly, there just aren’t a lot of other folks who can perform in the same ways — in fact, there are none. And there are some things only we can do. There are some capabilities only we have. That’s because of you — your dedication, your skill, your work, your families supporting you, your training, your command structure. Our Armed Forces are unparalleled and unique. And so when we’ve got a big problem somewhere around the world, it falls on our shoulders. And sometimes that’s tough. But that’s what sets us apart. That’s why we’re America. That’s what the stars and stripes are all about.

“In an uncertain world full of breathtaking change, the one constant is American leadership.”

And, because of the strength and dedication of America’s military, the President made clear that we will send an unmistakable message to ISIL:

Whether in Iraq or in Syria, these terrorists will learn the same thing that the leaders of al Qaeda already know: We mean what we say; our reach is long; if you threaten America, you will find no safe haven. We will find you eventually.

News broke late yesterday in the Seattle Post-Intelligencer that federal agents arrested a convicted felon in Olympia for buying and selling guns online — even though he was prohibited by law from possessing guns.1

This story is as scary as it is real. It demonstrates what Everytown revealed in our investigation yesterday: Criminals are flocking to the Internet to buy guns because there’s no requirement to run criminal background checks.

We have to close this loophole and that starts by voting YES on Initiative 594 on the ballot this fall — an initiative that would require background checks for all gun sales in our state.

Thanks for standing with us.

I just had the pleasure of joining my fellow Democratic women in Congress on a “When Women Succeed, America Succeeds” bus tour from Seneca Falls, NY down to Boston, over through Ohio, and all the way to Chicago.

It was an exceptional opportunity to hear directly from hard-working women about the obstacles they face, and discuss the real possibilities for action. After this trip, I’m more confident than ever that our Women’s Economic Agenda would be a great start in unleashing the power of women.

what do you think?

“When women succeed, America succeeds” is not just a title for our economic agenda for women and families, it’s a statement of fact.

That’s why it was so fitting that we launched our “Women on a Roll” tour in Seneca Falls, home of the first Women’s Rights Convention which was held in 1848. They had a dream, they had a vision, they had a plan and they got it done — that is what we have to do.

I hope you’ll be a part of this.

Thank you for standing with us.