You can see Jasmine and her Partner in Video2 starting at 46:40 … amazing

Billy Rose nicknamed her “Jailbait” — but Paulette Harwood was too young to know what the great showman meant. After all, she was just 16 when she started dancing at his Diamond Horseshoe, in the basement of Times Square’s Paramount Hotel.

The glitzy nightclub was in its heyday in 1943 when Paulette arrived, fresh from ballet school.

And while the club fell on hard times — closing in 1951, its once-elegant interior trashed — it reopened Dec. 31, 2013, with a production called “Queen of the Night.”

Harwood, who might lay claim to that title as well, was there to see it.

She returned there the other day with 20 of her ballet students, who took the bus down from Newton Upper Falls, Mass., to see where their famous teacher once danced.

Now 87, her thick, honey-blond hair gone white, Harwood patted the stage, her eyes moist. “It brings back such wonderful memories of my grandmother,” she said of the woman who raised and chaperoned her. “I was just so happy to be paid, doing something I loved!”

Growing up in Brookline, Mass., the only child of parents who divorced before she turned 1, Harwood can’t remember a time she wasn’t dancing. At 14, she skipped school to audition for the Boston Opera’s “The Merry Widow.” She made it into the corps, spending her freshman year en pointe.

Her ballet teacher was Harriet Hoctor, a former Ziegfeld Follies girl and favorite Rose dancer and choreographer. But Hoctor was tired of performing, and knew whom she wanted to succeed her.

She personally took her star pupil down to the Diamond Horseshoe, where Rose saw Harwood dance and hired her on the spot.

‘We could outdance the Rockettes any day of the week!’

He was protective, too, letting her and her grandmother, Dodo, stay in the hotel for free. Harwood commuted to work by elevator.

Her pay was $100 a week, a nice chunk of change back then, especially for a high-schooler. Besides, the club had a kitchen — “where the food was delicious, and I was so skinny, they kept trying to feed me!”

Even so, she got her share of unwanted attention. But Harwood was there to work, not play. “If [men] asked me out, I told them I had to take my grandmother,” she says. “They weren’t interested after that.”

Her show was a revue titled “The Post War Preview,” which forecast a world free of the fighting that dragged on for another year.

Rose, who by then had divorced Fanny Brice, the original funny lady, was a lyricist as well as an impresario, and supplied words to “The Blue Danube Waltz,” which a young man sang as Harwood pirouetted.

As soon as she finished, she ran upstairs to change for the big cancan number.

When she wasn’t dancing, she did her schoolwork, typing her papers on the pay machines in the hotel lobby. A dime got you 30 minutes of typing time, so she learned to type fast.

But even a high-school girl can be a teacher.

“The showgirls were beautiful, but they didn’t know how to walk,” she recalls of Rose’s “Long-Stemmed Roses,” who were all 6 feet or taller.

“They’d go clunk, clunk on their heels,” Harwood recalls. Like a mother duckling with very big chicks, she led them around until they’d achieved a modicum of grace.

They all towered over Rose, who barely cleared 5 feet. “He’d climb on a table and give directions,” she recalls. “Every time we turned around, he’d be on top of a table!”

‘If [men] asked me out, I told them I had to take my grandmother. They weren’t interested after that.’

After six months, Rose decided to take his revue on the road and entertain the troops. Harwood and her grandmother came along, and Rose took them to USO halls, bases and hospitals at his own expense.

She came home in time to graduate from high school, then returned to New York to dance at the Copacabana and the Latin Quarter, whose stage door opened onto Times Square.

On VJ Day, she and the other dancers spilled into the street, falling into the arms of sailors. “They were all kissing the girls that day,” she says, and yes, she was one of them.

In 1945, she joined Radio City Music Hall’s Corps de Ballet, not to be confused with the Rockettes.

“That’s a dirty word in our language,” she sniffs. “We could outdance the Rockettes any day of the week!”

The rival dancers had separate dressing rooms: the ballerinas on 50th Street, the Rockettes along 51st.

Three years in, she hurt her ankle so bad, she couldn’t dance. She returned to Boston, opened a ballet studio, met “a cocky little Irishman” on a blind date, and fell in love.

She and her husband, Paul, went on to have three daughters — all of them dancers, one of whom married actor Peter Gallagher.

All in all, she says, a good life. A dancer’s life.

The Washington Legislature will be wrapping up business for the year, as soon as both houses agree to an operating budget.

We made some critical progress in 2015. Joel’s Law will help families intervene when a loved one experiencing a mental health crisis is denied emergency hospitalization.  And the Sheena Henderson Act will protect survivors of domestic abuse by giving them the ability to know when a firearm is about to be returned to their abuser.  These new laws will save lives, and that’s something to celebrate! 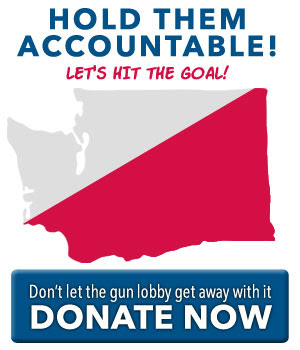 We also defeated a multipronged effort by the gun lobby to create loopholes and weaken our new universal background checks law.

That’s the good news.  Now, here’s where we have our work cut out for us.

At every turn, the gun lobby and their pals in Olympia conspired to block, stall, and derail Extreme Risk Protection Orders – a common sense proposal that could prevent the next UC-Santa Barbara or Cafe Racer attack.

But the gun lobby said no. They have a “general philosophical opposition” to a bill that would empower families to temporarily remove firearms from people threatening harm.

For far too long we’ve let the politicians who conspire with the gun lobby get away with it.  Not anymore.  We’re going to be holding their feet to the fire.  That’s why we launched the Hold Them Accountable Fund, and why we’re aiming to raise an extra $5,000 by the end of the month.

Chip in a donation right now.  Let’s hit the goal and build a grassroots-powered campaign to hold the politicians accountable!

See more from our “Photo of the Day” gallery here.

Today, the Environmental Protection Agency (EPA) and the Army are finalizing a Clean Water Rule to protect the streams and wetlands we rely on for our health, our economy, and our way of life. Find out exactly why this rule is so important.

Memorial Day 2015: Honoring Our Soldiers Who Paid the Ultimate Sacrifice

This Memorial Day, President Obama traveled to Arlington National Cemetery in Arlington, Virginia to pay solemn tribute to the men and women of our armed forces who have made the ultimate sacrifice.

The First Lady Celebrates the 2015 Graduates of Oberlin College

On Monday, First Lady Michelle Obama addressed the class of 2015 at Oberlin College in Ohio. Oberlin was the first college in America to adopt a policy to admit African American students, as well as the first co-ed school to grant bachelor’s degrees to women — and this year marked the 50th anniversary of Dr. Martin Luther King’s own commencement address at Oberlin College.

Tell Us: What’s Your Stake in Clean Water?

One in three Americans get their drinking water from areas that don’t have clear pollution protection.

But this week, after hundreds of meetings and reviewing more than 1 million comments from Americans, the Environmental Protection Agency and the Army Corps of Engineers are taking steps to fix the problem. Together, they’re releasing a Clean Water Rule that strengthens and expands protections for bodies of water that more than a third of Americans rely on for their drinking water.

Share with us why clean water is important to you, and join the conversation online using #CleanWaterRules on your social media channels.