After years of pressure on Bank of America, they just announced a new coal mining policy: “Our new policy … reflects our decision to continue to reduce our credit exposure over time to the coal mining sector globally.”1

This is a huge moment. Bank of America has gone from being the worst bankroller of coal to having the strongest global coal mining policy of any major global bank. It’s the result of years of hard-hitting campaigning by RAN, our many front-line allies — and by you and all of RAN’s supporters in this fight. So, thank you for everything you’ve done. 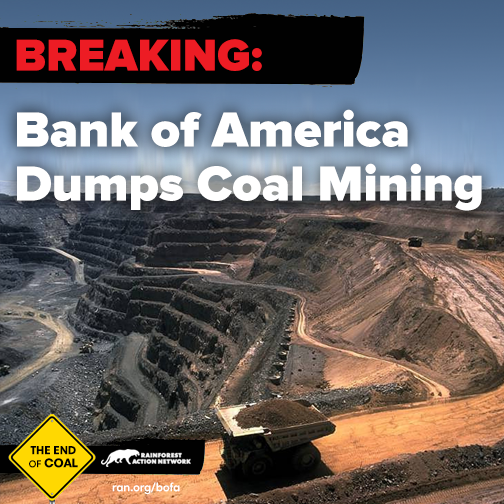 Now, we have to hold Bank of America to its word by rigorously monitoring their implementation of this policy. And second, we have to push other banks to meet or exceed Bank of America’s coal mining policy. There are just a few short years left to meet the challenge of climate change. We need to build on this victory to stop the coal industry using big banks as ATMs.

Will you help RAN do that vital work by chipping in today?

I’m writing to you from the Bank of America shareholder meeting in Charlotte, NC, where I came to hear today’s announcement in person. RAN has been at this meeting every year since 2011 to make the case that the bank should divest from coal mining. I’m thinking about the many allies whom we have stood here with throughout this campaign. Allies like Paul Corbit Brown, whose stunning photographs and eloquent advocacy have made it impossible for Bank of America to ignore the destruction that mountaintop removal coal mining has done to his home state of West Virginia. Allies like Pat Moore, who was so outraged by Bank of America funding the coal-fired power plants in her community, while her granddaughter suffered through asthma attacks, that she led a civil disobedience action here in Charlotte. I’m thrilled to share this moment with them.

When we started this campaign in 2011, most banks were basing their wafer-thin “climate commitments” around efficient lightbulbs in their branches and green-certified headquarters. Other banks felt that modest investments in renewable energy allowed them to ignore their huge investments in fossil fuels. After four years of hard work, Bank of America’s coal mining policy represents a sea change: it acknowledges that they’re responsible for the fossil fuels that they bankroll. This is a huge paradigm shift.

When we first approached Bank of America about instituting a responsible coal policy, they told us they were “diametrically opposed to our position on coal”. They said they aspired to be “number one in every sector” — including the fossil fuel sector. We took on Bank of America because they were the hardest target: they were the most resistant to stopping doing business as usual.

Today, with Bank of America’s new coal policy, we’ve reached a huge milestone. Now we have to make sure they’re as good as their word. Will you help us do that by chipping in today?

This new policy is the strongest to date of any global private-sector bank — but it can’t be the only one. Across the financial sector, we don’t need big banks to change the lightbulbs at their corporate headquarters, we need them to stop bankrolling fossil fuels that are killing the climate. Coal, oil and gas need to be left in the ground.

We’re going to push other banks to own up to the climate consequences of their financing decisions, and meet or exceed Bank of America’s policy. Time is running out to stop catastrophic climate change. We can’t meet the challenge of our era unless the big banks profiting from fossil fuels drop their support. Along with our allies — and supporters like you — we’ll build on today’s success to turn this into a truly sector-wide change.

But we can’t do it without you. Support that work today!

In gratitude, for our communities and the climate,

P.S. To celebrate the hard work of our allies and supporters in this fight, we’ve put together a timeline of key moments in the years-long campaign against Bank of America. Check it out!

~ Miami Herald//Barack Obama Op-Ed: We can no longer delay action on climate change

Last week I spent Earth Day in the Everglades, one of our nation’s greatest national treasures, and saw firsthand what makes its unique landscape so magical — what the poet Emma Lazarus called “the savage splendor of the swamp.” Plus, I got to hang out with Bill Nye the Science Guy. “There are no other Everglades in the world,” wrote Marjory Stoneman Douglas, who helped preserve it. But climate change is threatening this treasure and the communities that depend on it. That’s what my visit was all about.

President Obama and his negotiators are working to finish the Trans-Pacific Partnership, a trade deal among 12 Pacific nations that has come to be known as TPP, while also fighting to win “fast track” negotiating authority from Congress to expedite approval of the deal later this year.

Warning of an “innovation deficit,” scientists at the Massachusetts Institute of Technology say declining government spending on basic research is holding back potentially life-saving advances in 15 fields, from robotics and fusion energy to Alzheimer’s disease and agriculture.

~ Politico // Heather Caygle ~ DOT secretary: US transportation system “in a huge ditch”
“We’ve had catastrophes, and it’s unfortunate that we’ve had to have catastrophes,” Foxx told POLITICO’s Mike Allen at a Playbook Lunch event, mentioning the 2007 Interstate 35 bridge collapse in Minneapolis that killed 13 people. “I think, frankly, the American public have to demand action in Washington.”

**********************************
~ The New York Times // Paul Krugman Op-Ed: Nobody Said That
Imagine yourself as a regular commentator on public affairs — maybe a paid pundit, maybe a supposed expert in some area, maybe just an opinionated billionaire. You weigh in on a major policy initiative that’s about to happen, making strong predictions of disaster. The Obama stimulus, you declare, will cause soaring interest rates; the Fed’s bond purchases will “debase the dollar” and cause high inflation; the Affordable Care Act will collapse in a vicious circle of declining enrollment and surging costs. But nothing you predicted actually comes to pass. What do you do?

What: Join us at Rep. Delbene’s office to ask her to vote no on fast track Trade Promotion Authority. Currently before Congress, this bill would pave the way for quick passage of the Trans-Pacific Partnership, a secretive trade deal referred to as “NAFTA on steroids.” Rep. DelBene has not yet said that we can count on her vote against fast track, so we’ll deliver shoes with the message “Don’t walk away from workers.” Bring an old pair of shoes if you have them!

Can you join us in Bothell on Friday?
Click below for more details and to RSVP:

Following any Leader remarks, the Senate will resume consideration of H.R.1191, the legislative vehicle for the Iran Nuclear Agreement Review Act of 2015, with the time until the cloture vote equally divided between the two Leaders or their designees. The cloture vote on the Corker-Cardin amendment #1140 (substitute) will be at 10:30am. The filing deadline for second degree amendments is 10:00am.

Adopted S.Res.175, recognizing the roles and contributions of the teachers of the United States.

Adopted S.Res.175, recognizing the roles and contributions of the teachers of the United States.