On Friday afternoon, President Obama addressed the annual meeting of the U.S. Conference of Mayors in San Francisco.

The President spoke on the need to enact common-sense gun safety reforms in the wake of last week’s mass shooting in Charleston, and highlighted progress across the country on other issues such as job creation and early childhood education. 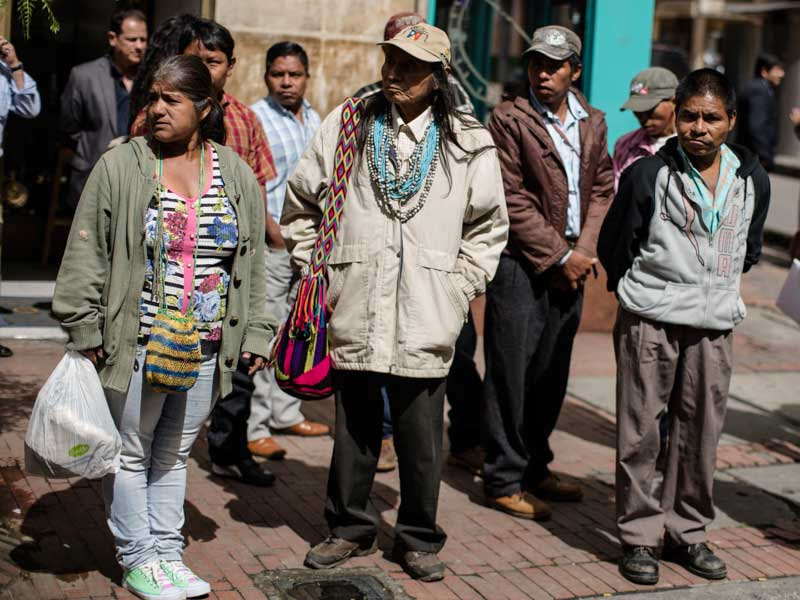 On one side of the table a group embodying integrity, legitimacy, humility. Across from them on the other? The personification of cynicism, obfuscation and arrogance. That was the scene in Bogotá yesterday where the U’wa people took their fight into a meeting with the Colombian government, calling on it to live up to previously negotiated agreements. Ultimately the U’wa walked out, seeing the complete lack of intention on the government’s part to have meaningful dialogue.

READ THE REST ON EYE ON THE AMAZON

Tomorrow, Louisiana Gov. Bobby Jindal will announce that he is running for president at an event in New Orleans. Jindal has been called a rising star of the Republican Party, but now, despite hovering around 1 percent in the polls, he is entering the crowded GOP field as a longshot. This is despite his best efforts to appeal to the most conservative voters by taking some extreme – or extremely political – positions. In fact, we are not sure there’s ever been a former Rhodes Scholar running for president who is so unconcerned with facts.

Here’s some evidence of that in advance of his official launch tomorrow:

CLIMATE:
THEN: Jindal’s faith prevented him from supporting marriage equality.
Bobby Jindal has said he is unable to support marriage equality due to his faith: “I hold the view that has been the consensus in our country for over two centuries: that marriage is between one man and one woman. Polls indicate that the American consensus is changing — but like many other believers, I will not change my faith-driven view on this matter, even if it becomes a minority opinion.”
NOW: Jindal dismissed the Pope’s encyclical on climate change.
After the Pope released his encyclical urging global action to address climate change, Jindal—who has done nothing as Governor to protect his state from the effects of climate change—dismissed the comments saying that liberals don’t pay attention to the pope’s position on family values.

RACE
THEN: Jindal echoes a Fox News pundit by slamming “no-go zones” –a ridiculous concept describing Muslim neighborhoods where sharia law supposedly supersedes local law and where non-Muslims are prohibited.
After Fox News pundit Steve Emerson called Birmingham, England “Totally Muslim, [A City] Where Non-Muslims Simply Don’t Go In,” Jindal slammed so called ‘no-go zones’ saying, “In the West, non-assimilationist Muslims establish enclaves and carry out as much of Sharia law as they can without regard for the laws of the democratic countries which provided them a new home.”
NOW: Fox News and the pundit himself quickly apologized. 155 days after making the comment, Jindal has still not issued an apology.
Two days after making the statement, Emerson issued an apology on his website, on BBC, and on other forums. Even Fox News apologized four times for the comments. It has been 155 days since Jindal made his first ‘no-go’ zones comment and he has yet to issue an apology. In fact, when asked if he would walk back his comments Jindal said “not at all.”

HEALTHCARE
THEN: Jindal said the ACA is ‘unpopular, unworkable, and misguided’
Jindal has been a staunch opponent of the Affordable Care Act since it passed. After the law survived its first Supreme Court challenge Jindal vowed not to implement the law and he has refused to establish a state exchange and expand Medicaid. The whole state has paid the price of Jindal not expanding Medicaid—every year over 500 preventable deaths happen in Louisiana because Medicaid wasn’t expanded.
NOW: Jindal continues to put politics over people’s lives, proposing to cut millions from funding for Louisiana hospitals.
Jindal has refused to expand Medicaid in the state, a decision that results in the deaths of estimated 10 people in the state every week. On top of that, Louisiana hospitals are struggling to cover the cost of care for the poor and uninsured. After hospitals reported needed $142 million more in funding to make ends meet, Jindal proposed cutting their budget by an additional $15 million.

BOTTOM LINE: From refusing to implement the Affordable Care Act, to refusing to act on climate change, Bobby Jindal completely ignored facts and Louisianans are paying the price, which is probably why polls show that less than 35 percent of his state approves of the job he’s doing. Because of his refusal to govern based on facts, Jindal has let Louisianans fall even further behind, all so he could set up his extreme longshot run to hurt the rest of America too.

“Because of the groundwork that you and so many of you laid before, from sophisticated national campaigns to small, quiet acts of defiance — together, we’ve been able to do more to protect the rights of lesbian, gay, bisexual, and transgender Americans than at any time in our history.”