Never again. The president can help ensure there are no more disasters like the Deepwater Horizon — and establish his climate legacy at the same time. Call on President Obama to stop leasing our public lands and waters to the fossil fuel industry. 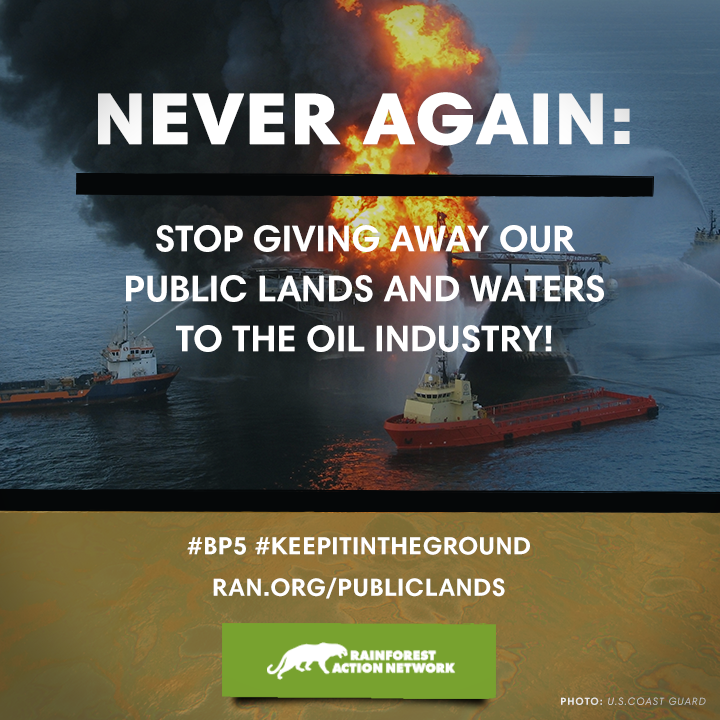 The Gulf Coast is still suffering. The 170,000 workers who cleaned up the spill are at greater risk for cancer, and kidney and liver disease.2 Last year, dolphins and whales off the Louisiana coast died at four times the usual rates.3 And 10 million gallons of oil sit on the Gulf floor in a congealed “bath mat” the size of Rhode Island.4

BP controls more of the deepwater Gulf than any other oil company, with an outrageous 600 leases.5 In the case of the Deepwater Horizon disaster, a U.S. judge found BP’s conduct to be “grossly negligent”.6 But — to be clear — when it comes to the fossil fuel industry, gross negligence is business as usual.

So we’re joining our friends at CREDO Action to say: No more Gulf oil spills. No more giving away our public lands and waters to rapacious fossil fuel companies that care only about their profits. Tell President Obama to issue an executive order now.

President Obama wants to be remembered as a climate leader. But he has a huge climate blindspot. While the president has pushed for international agreements to limit carbon pollution, he’s also presided over a massive drilling boom on our public lands and in our coastal waters.

That explosive growth is killing the climate. Emissions from federally managed lands and waters cause approximately 24 percent of U.S. energy-related greenhouse gas emissions annually — mostly from coal, oil and gas.7

The solution is simple. If President Obama wants to establish a real climate legacy, he should issue an executive order instructing federal agencies to stop granting new and expanded leases to extract fossil fuels from public lands.

To avoid catastrophic climate change, scientists say we must keep between 67% and 80% of the world’s remaining fossil fuels in the ground.8 One quarter of U.S. fossil fuel production happens on federally-managed lands and waters. The president can take a huge step towards stopping climate change — and preventing future Gulf oil spills. Urge him to issue an executive order today.

For our lands and our waters, our communities and our climate,

P.S. Bridge the Gulf, Louisiana Bucket Brigade, and Idle No More Gulf Coast are among the many organizations fighting for justice and accountability in the aftermath of the Deepwater Horizon oil spill. On this fifth anniversary of the BP disaster, support them today.