There’s a reason the new parental leave policy from Starbucks is so controversial: it would provide different amounts of leave to different types of parents.

Find out more and let us know what you think about this controversial policy that treats different types of parents so differently.

Whether you work in a store or work in an office, everyone needs time to care for their families. That’s why more & more companies are providing paid family leave. That’s why we’re seeing real momentum behind the issue in the State Legislature.

And that’s why we need companies like Starbucks to lead the way and offer policies which recognize that all of us need time to care.

Take a look at the Starbucks policy and let us know what you think.

Thanks for everything you do,

all of us at Working Washington 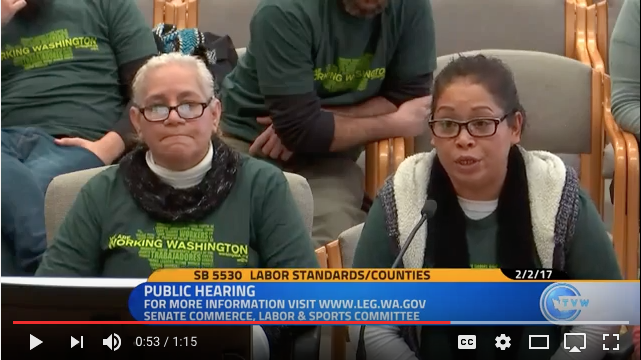 Well here’s some good news : our minimum wage is safe!

On 3/8/2017 at 5:00pm , three bills that would have rolled back our state minimum wage officially “died” in the State Legislature.

Click here to add your voice and help us celebrate this big win for workers!

Click here to add your voice and help us celebrate this big win for workers!

1302 – The characters Romeo and Juliet were married this day according to William Shakespeare.

1649 – The peace of Rueil was signed between the Frondeurs (rebels) and the French government.

1665 – A new legal code was approved for the Dutch and English towns, guaranteeing religious observances unhindered.

1702 – The Daily Courant, the first regular English newspaper was published.

1791 – Samuel Mulliken became the first person to receive more than one patent from the U.S. Patent Office.

1810 – The Emperor Napoleon Bonaparte was married by proxy to Archduchess Marie Louise of Austria.

1845 – Seven hundred Maoris led by their chief, Hone-Heke, burned the small town of Kororareka. The act was in protest to the settlement of Maoriland by Europeans, which was a breach of the 1840 Treaty of Waitangi.

1861 – A Confederate Convention was held in Montgomery, Alabama, where a new constitution was adopted.

1882 – The Intercollegiate Lacrosse Association was formed in Princeton, NJ.

1888 – The “Blizzard of ’88” began along the U.S. Atlantic Seaboard shutting down communication and transportation lines. More than 400 people died.(March 11-14)

1901 – Britain rejected an amended treaty to the canal agreement with Nicaragua.

1904 – After 30 years of drilling, the north tunnel under the Hudson River was holed through. The link was between Jersey City, NJ, and New York, NY.

1905 – The Parisian subway was officially inaugurated.

1907 – In Bulgaria, Premier Nicolas Petkov was killed by an anarchist.

1909 – The first gold medal to a perfect-score bowler was awarded to A.C. Jellison by the American Bowling Congress.

1930 – U.S. President Howard Taft became the first U.S. president to be buried in the National Cemetery in Arlington, VA.

1935 – The German Air Force became an official department of the Reich.

1946 – Communists and Nationalists began fighting as the Soviets pulled out of Mukden, Manchuria.

1946 – Pravda denounced Winston Churchill as anti-Soviet and a warmonger.

1959 – The Lorraine Hansberry drama A Raisin in the Sun opened at New York’s Ethel Barrymore Theater.

1964 – U.S. Senator Carl Hayden broke the record for continuous service in the U.S. Senate. He had worked 37 years and seven days.

1965 – The American navy began inspecting Vietnamese junks in an effort to end arms smuggling to the South.

1985 – Mikhail Gorbachev was named the new chairman of the Soviet Communist Party.

1986 – Popsicle announced its plan to end the traditional twin-stick frozen treat for a one-stick model.

1988 – A cease-fire was declared in the war between Iran and Iraq.

1990 – Lithuania declared its independence from the Soviet Union. It was the first Soviet republic to break away from Communist control.

1990 – In Chile, Patricio Aylwin was sworn in as the first democratically elected president since 1973.

1993 – Janet Reno was unanimously confirmed by the U.S. Senate to become the first female attorney general.

1994 – In Chile, Eduardo Frei was sworn in as President. It was the first peaceful transfer of power in Chile since 1970.

1997 – An explosion at a nuclear waste reprocessing plant caused 35 workers to be exposed to low levels of radioactivity. The incident was the worst in Japan’s history.

1998 – The International Astronomical Union issued an alert that said that a mile-wide asteroid could come very close to, and possibly hit, Earth on Oct. 26, 2028. The next day NASA’s Jet Propulsion Laboratory announced that there was no chance the asteroid would hit Earth.

2002 – Two columns of light were pointed skyward from ground zero in New York as a temporary memorial to the victims of the terrorist attacks of September 11, 2001.