Today is “Selection Sunday” – the kick off for March Madness and that time of year when we all gather to see bracket busters, buzzer beaters and more memorable moments. This is also a time when the NCAA will heavily feature, promote, and make money off a number of student-athletes—an overwhelming number of them Black, and kids from low-income families. Athletes that according to the NCAA, should be treated as prison labor.1

That’s right, just last month, the NCAA- in an effort to maximize their own profits and limit the ability of athletes to profit from their own images- filed a motion with the court arguing that the 13th amendment should be applied to college students playing sports. The 13th amendment forbids slavery and involuntary servitude, “except as punishment for crime whereof the party shall have been duly convicted,” a loophole which has since been exploited to sustain our criminal justice system by targeting Black communities today2. The NCAA is pushing this insulting argument to keep what amounts to billions of dollars of advertising from sponsors like Coca-Cola3. Students across the nation are demanding the NCAA to treat them fairly but it is clear that money takes precedent over students. It is time to tell Coca-Cola to withdraw funding from the NCAA until they agree to pay student-athletes.

Corporations are supporting the NCAA as they fight to exploit student athletes by comparing them to prisoners.

The NCAA is trafficking in a tradition of racist laws criminalizing Black people preventing better treatment and wages in America4. Black codes after the Civil War forced Black people to work as sharecroppers and restricted movement, and the modern criminal justice system targeting Black communities5. Funding from corporations like Coca-Cola provides the rationale and resources for their exploitation. The NCAA exploits student-athletes and reinforces the system of exploitation Black people must face throughout the nation. Only through the active support of companies like Coca-Cola can the NCAA continue to push arguments that support our current system of incarceration and continued exploitation of students.

The comparison between prisoners and athletes shines a light on the way the policy against player pay is rooted in our larger system of exploitation. Coca-Cola should not be allowed to continue to profit from this exploitation of Black athletes. They are building on precedents currently targeting Black communities throughout the nation.

The NCAA is comparing players to prisoners in court. Tell Coca-Cola to stop their continued support for the NCAA.

While supporting the NCAA with funding as a corporate sponsor Coca-Cola has also positioned themselves as a corporation concerned with their social responsibility touting their “perfect score” in the corporate equality index6. Coca-Cola has even spoken directly to the issue of unpaid/slave labor since accusations of the practice have been made overseas7. Coca-Cola has promised to reform any practices forced labor practices associated with their company touting their “human rights due diligence tools”8. Why would this not include the student-athletes exploited by their partners at the NCAA? We will not let Coca-Cola have it both ways. We are joining together to tell Coca-Cola, to end their support for the NCAA unless they agree to pay players. We must tell Coca-Cola that support for the NCAA is not acceptable, while they make dollars off of the back of Black athletes. With our collective voices, we can send a message to the Coca-Cola that we are watching and will not accept support for exploitation.

Sign the petition now and make sure your voice is heard.

In case you missed it: Last Thursday morning, domestic workers with the Seattle Domestic Workers Alliance (SDWA) came together at Seattle City Hall. They assembled a massive village of thousands of diapers and gloves representing nannies & house cleaners across the city. (And Working WA members donated $ to help buy the diapers, which we passed on to WestSide Baby for families in need when the action was over — if you’d like to donate too, click here!)

It was all in the name of making their voices heard in support of a Domestic Workers Bill of Rights. And the action was a huge success! 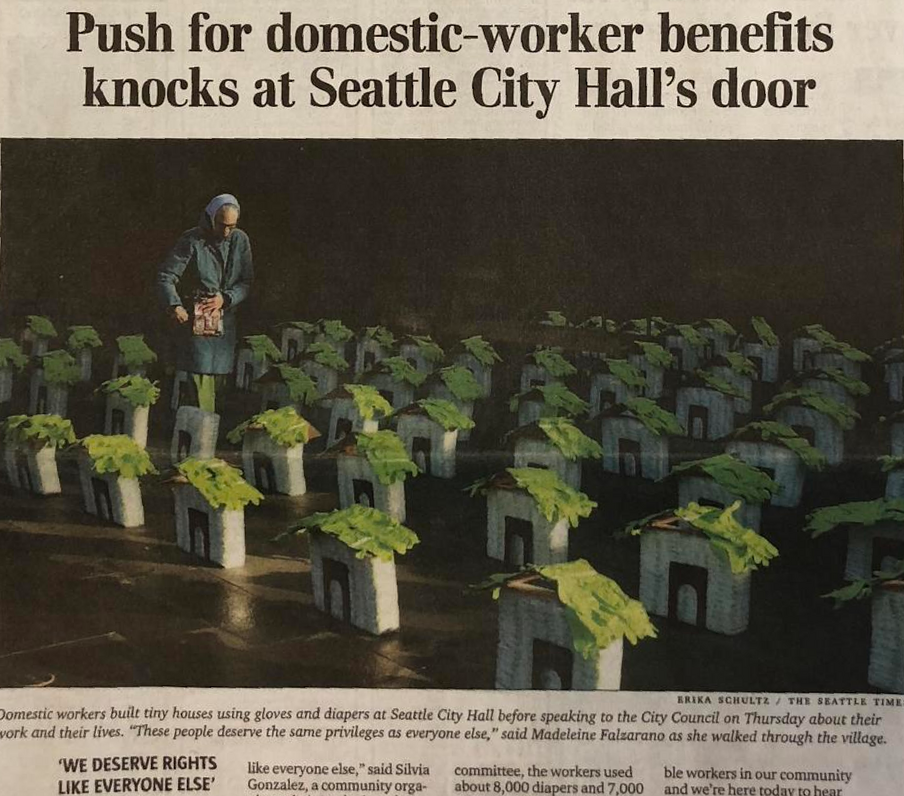 After building the display outside City Hall, workers headed inside to take a seat at the table with City Council members and share their stories. Here’s Ty, a nanny, musician, and Working Washington leader, talking about her experience: 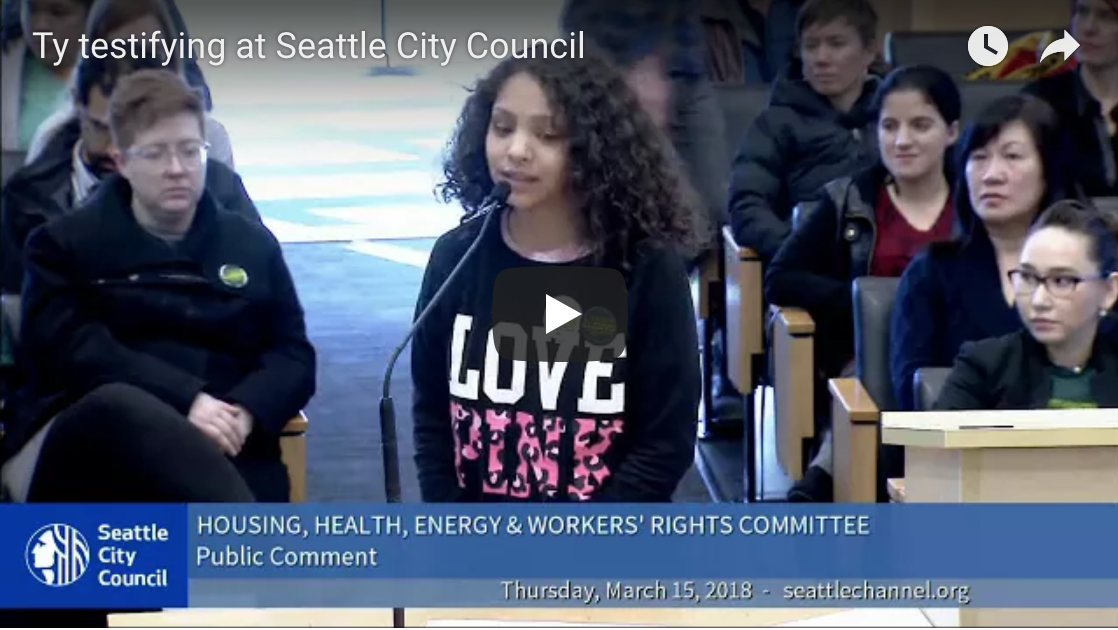 And here’s Etelbina, a house cleaner, sharing her story: 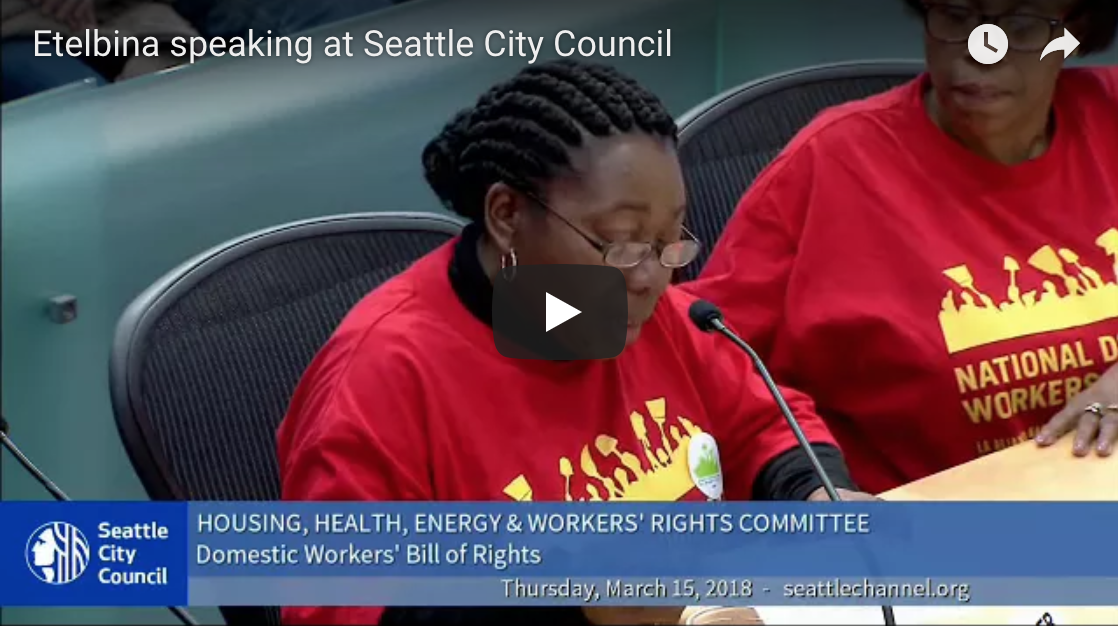 [For transcriptions & translations of the videos, please click here.]

Workers like Ty & Etelbina have led the way for the Domestic Workers Bill of Rights — and City Council members are taking notice:

When workers unite and speak out, big changes happen — and bringing together house cleaners, home care workers, and nannies in one room under one united voice was a huge step forward in making a Domestic Workers Bill of Rights a reality in Seattle.

The Bill of Rights would ensure domestic workers get basic rights like the minimum wage, paid time off, and protections from harassment and discrimination. Most importantly, it establishes a worker council — a governing body made up of workers, employers, and city representatives — so that workers have a voice in setting higher industry standards. Click here if you’d like to donate to keep us moving forward.

P.S. Want to check out more coverage from the event? Check out the articles in the Seattle Times and the Stranger.

Here we go again. Congress once again needs to pass a spending bill to avert a government shutdown, and it needs to do it by March 23. This time the Dream Act isn’t the central issue, and we don’t expect there to be another government shutdown. But there are still a number of important issues that need to be resolved and where you can make a difference. Here’s what you need to watch for and ways you can help protect our most vulnerable communities.

Before we begin, here’s a quick refresher on the types of government spending bills that Congress typically passes:

“CR”: A continuing resolution, this is government-on-autopilot, or a temporary band-aid. It continues current funding levels for a duration of time (usually short, sometimes only a few days or weeks) set by Congress.

“Omnibus”: This is a set of twelve funding bills, which Congress is supposed to pass every year, rolled into one giant funding bill. This funding typically lasts a year.

CONGRESS WILL TRY TO PASS AN OMNIBUS, BUT MAY HAVE TO SETTLE FOR A CROMNIBUS

Republicans are hoping to pass a spending bill that will take them through the rest of the fiscal year ending on September 31, 2018. Republicans and Democrats have finalized the details in most of the 12 funding bills, but they’ve been putting off some of the most controversial issues until the very end. Negotiations have stalled around the funding allocations within the Department of Homeland Security (DHS), which oversees both emergency management and immigration enforcement agencies. If negotiators fail to reach a compromise on the DHS components, Congress may need to pass a CRomnibus to avert a shutdown while giving itself additional time to work through the DHS funding levels.

If you care about Dreamers, you should care about the ongoing omnibus negotiations. While the Dream Act is not under consideration in the spending bill talks, what is under consideration is the amount of money that will become available to deport them and their families. Trump is asking for billions of dollars in funding for his border wall, additional funding for detention beds and facilities, and an increase in funding for both Immigration and Customs Enforcement (ICE) and Customs and Border Protection (CBP). In short, while Congress has failed at providing desperately needed relief for Dreamers, it is about to increase funding for their deportation.

THERE ARE OTHER ISSUES YOU SHOULD KNOW ABOUT, TOO.

When Trump tried to sabotage the Affordable Care Act last fall, Republicans and Democrats came together to put together legislation (referred to as “Alexander-Murray,” named after Lamar Alexander (R-TN) and Patty Murray (D-WA) to put a stop to it. But since that time, Republicans totally changed the game: they repealed the Affordable Care Act’s individual mandate, a key piece of the law. That totally changes the dynamics of the health care market. And because insurance companies adjusted on their own to Trump’s sabotage, passing this legislation now would actually drive UP costs for consumers. Nonetheless, Mitch McConnell has a promise to keep to Senator Susan Collins (she traded her yes vote on the #GOPTaxScam for passage of this legislation) and he wants it in the Omnibus. That’s good for Republican horse-trading but bad for the American people.

Republicans passed the Tax Scam at warp speed in the middle of the night, with handwritten notes in the margins of the pages. It was a disaster and a total perversion of policymaking. So naturally, there are more than a few technical problems with the bill. Now that Republicans have created a huge mess with the bill they passed on a hyper-partisan fast track, they expect Democrats to help them clean up the mess by including fixes to their errors in the Omnibus. And, unfortunately, Democrats are all too eager to help. In fact, Senator Maria Cantwell wants to trade a watered-down version of her Low Income Housing Tax Credit bill in exchange for Tax Scam fixes. Democrats should not be helping Republicans clean up their Tax Scam mess. Period.

The negotiations are ongoing and so you can make a difference by making it clear to your three members of Congress that you don’t want increased funding for ICE, CBP, and the rest of Trump’s deportation machine. As talks continue, it’ll be up to congressional leadership from both parties whether funding is increased, so they need to hear from rank-and-file members of Congress ASAP. That’s where you come in. Demand that your MoCs let their party leaders that they’re opposed to more funding for Trump’s deportation machine.

Staffer: Thank you for calling. [Representative / Senator] thinks that we need to fix our broken immigration system, but we need to start by respecting our laws. He supports funding for ICE, CBP, and for border security because it’s necessary to keep our communities safe.

Caller: That’s disappointing. Congress has failed to provide relief for Dreamers and hundreds continue to lose their protections every day. It is unacceptable that as Dreamers continue to wait for relief, [Representative / Senator] plans to vote for making it easier for Trump to deport them.

Staffer: I’ll pass your message to the [Representative / Senator].

Caller: Yes please do, and please take down my contact information so you can let me know what the Senator decides to do on future votes.