My name is Kimberly, and I’ve been working for “gig economy” apps like Caviar and Lyft for almost three years. I’m in the process of starting another business, so working in the gig economy pays my bills while I’m getting it off the ground.

There are some things I really like about working for these apps. Chief among them is that I am the master of my schedule and don’t need permission from a boss or anyone else as to how and when I work. 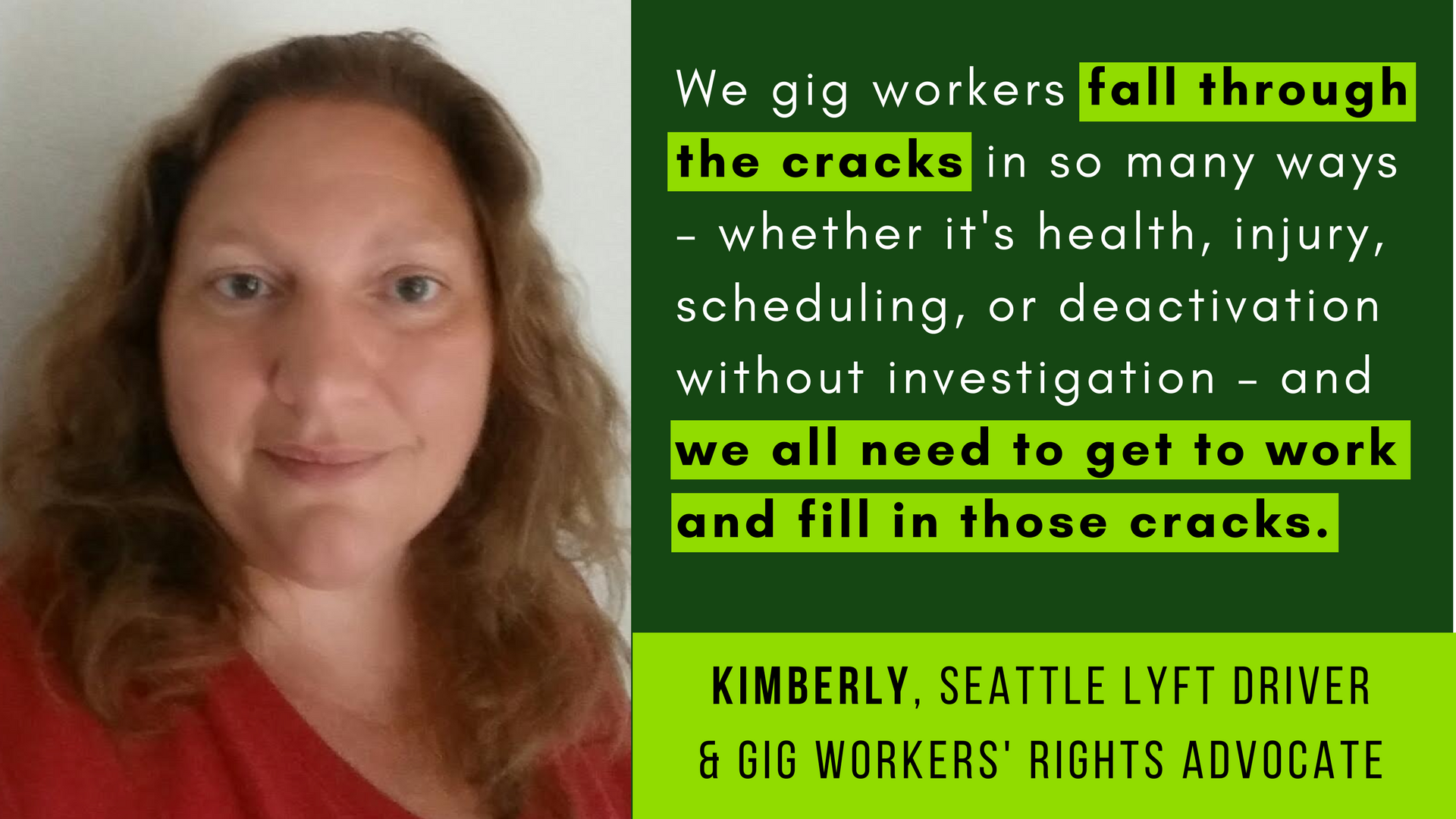 However, gig economy workers like me are facing some major issues, too. It’s hard to maintain a stable income when the commission structures on our apps change constantly and companies can oversaturate the market at will. Because we’re classified as independent contractors, we don’t have access to the basic rights & benefits that most other workers in our state enjoy – from a minimum wage to health insurance, from workers’ comp and unemployment to retirement. Not only that, but we have to bear all of the costs of doing our work — including additional payroll taxes, gas, wear & tear on our cars, insurance, and more. Many of these costs must be borne regardless of how much or how little we make that month.

Whether you’re a gig worker, an app customer, or simply an ally, click here to get involved with our campaign for gig economy workers.

Recently, another car rear-ended me, and my car ended up being out of commission for five weeks. Since I don’t have any vacation days or PTO and couldn’t access unemployment, I had no income for over a month. The stress of not being able to make my car payment was tremendous. I was worried about the impact of a late payment on my credit score, and even had to beg my landlord to give me more time to pay rent, not knowing if he would say yes or if I’d be out on the street.

If I’d been able to take PTO or even draw a bit of unemployment, I could have at least gotten the rent paid and covered a few basic things. I could have hung in there until I was able to work again, without going into the hole and therefore being even more financially strapped when I was able to get back to work. That’s why it’s important to me that we advocate for benefits for gig workers. We gig workers fall through the cracks in so many ways – whether it’s health, injury, scheduling, or deactivation without investigation – and we all need to get to work and fill in those cracks.

I got involved with Working Washington a few months ago through Facebook. Since then, I’ve been attending gig worker meetings, speaking out about my experiences, and have emerged as a leader in helping drive our agenda to get fair treatment for all gig workers. Dozens of gig workers like me have come together to advocate for inclusion in the benefits most other workers in our state already get, as well as a fair wage for the work we’re doing.

When we’re not willing to make a stand and demand that companies treat their workers better, we’re passively condoning the exploitation of workers. When workers get access to basic rights, benefits, and a fair wage, we are all lifted up. For real, sustainable change to happen, we’ve got to raise the floor — and everybody has to be on board.

That’s where you come in. There are thousands of workers like me out there who need benefits and better pay. Join us:

This is a serious grassroots effort that must succeed, and once we succeed, we’ll be a model for many other states, and even the impetus for a stronger workers’ rights movement across the country. It’s all about a better future. And to make it happen – we need you.