Unless you are someone who either makes money from child pornography or enjoys viewing child pornography, you probably find protecting any aspect of that sleazy business abhorrent. In two recent cases, the Supreme Court tried to balance issues of free speech versus child protection laws. The first, decided on April 16, 2002, Ashcroft v. Free Speech, involved provisions of the Child Pornography Prevention Act of 1996 (CPPA). The second, decided on June 23, 2003, United States v. ALA, involved provisions of the Children’s Internet Protection Act (CIPA), which was passed in December 2000.

Both laws enjoy widespread public support, but raise freedom of speech questions. Let’s look at the issues considered by the courts in these cases.

The Free Speech Coalition, which is an adult-entertainment trade association, filed suit in district court questioning two aspects of CPPA. The suit claimed that the terminology “appears to be” and “conveys the impression” used in defining pornography in the law was too overbroad and vague and could restrict the production and distribution of works that are protected by the First Amendment.

Congress, when it was considering the language for the law, was seeking to control new computer technology that allowed computer alteration of innocent images of real children or images created from scratch that simulated children posed in sexual acts. This law expanded existing bans on the more usual sort of child pornography. Congress believed that while no real children were harmed by the production of these computer-generated images, feeding the appetites of pedophiles or child molesters could harm real children.

The Free Speech Coalition said that while it opposes child pornography, the law could snare legitimate films and photographs produced by its members. The group did not challenge the part of the law that banned the use of identifiable children, but only the part that related to computer-altered sexual images.

A district court judge upheld the law, but the 9th Circuit Court overturned the lower court and ruled that the law did violate the Constitution’s free speech guarantee. The U.S. government then appealed the decision to the Supreme Court in Ashcroft v. Free Speech Coalition. Both the Clinton and Bush administrations defended the law, saying it “helps to stamp out the market for child pornography involving real children.”

In a 6 to 3 Supreme Court opinion announced on April 16, 2002, the Supreme Court ruled that the two phrases that the Free Speech Coalition questioned were overbroad and unconstitutional. The Court said that these aspects of the pornography definition in CPPA were inconsistent with previous Supreme Court rulings, which require a stricter definition of pornography. The Court also found that since the CPPA provisions related to computer-generated images prohibit speech that is not a crime and create no victims, they do not meet previously established precedents in that regard either.

Justice Kennedy wrote the Court’s opinion and was joined by Justices Breyer, Ginsburg, Souter, and Stevens. Justice Thomas wrote a concurring opinion. Justice O’Connor wrote an opinion that concurred in part and dissented in part and was joined in part by Chief Justice Rehnquist and Justice Scalia. Chief Justice Rehnquist wrote the dissenting opinion and was joined by Scalia.
In writing for the majority, Justice Kennedy said:
“As a general principle, the First Amendment bars the government from dictating what we see or read or speak or hear. The freedom of speech has its limits; it does not embrace certain categories of speech, including defamation, incitement, obscenity, and pornography produced with real children … While these categories may be prohibited without violating the First Amendment, none of them includes the speech prohibited by the CPPA … the CPPA is much more than a supplement to the existing federal prohibition on obscenity … The materials need not appeal to the prurient interest. Any depiction of sexually explicit activity, no matter how it is presented, is proscribed. The CPPA applies to a picture in a psychology manual, as well as a movie depicting the horrors of sexual abuse. It is not necessary, moreover, that the image be patently offensive. Pictures of what appear to be 17-year-olds engaging in sexually explicit activity do not in every case contravene community standards.

“The CPPA prohibits speech despite its serious literary, artistic, political, or scientific value. The statute proscribes the visual depiction of an idea—that of teenagers engaging in sexual activity—that is a fact of modern society and has been a theme in art and literature throughout the ages. Under the CPPA, images are prohibited so long as the persons appear to be under 18 years of age … This is higher than the legal age for marriage in many States, as well as the age at which persons may consent to sexual relations … It is, of course, undeniable that some youths engage in sexual activity before the legal age, either on their own inclination or because they are victims of sexual abuse.

“Both themes—teenage sexual activity and the sexual abuse of children—have inspired countless literary works. William Shakespeare created the most famous pair of teenage lovers, one of whom is just 13 years of age … In the drama, Shakespeare portrays the relationship as something splendid and innocent, but not juvenile. The work has inspired no less than 40 motion pictures, some of which suggest that the teenagers consummated their relationship … Shakespeare may not have written sexually explicit scenes for the Elizabethean audience, but were modern directors to adopt a less conventional approach, that fact alone would not compel the conclusion that the work was obscene.

“Contemporary movies pursue similar themes. Last year’s Academy Awards featured the movie, Traffic, which was nominated for Best Picture … The film portrays a teenager, identified as a 16-year-old, who becomes addicted to drugs. The viewer sees the degradation of her addiction, which in the end leads her to a filthy room to trade sex for drugs. The year before, American Beauty won the Academy Award for Best Picture … In the course of the movie, a teenage girl engages in sexual relations with her teenage boyfriend, and another yields herself to the gratification of a middle-aged man. The film also contains a scene where, although the movie audience understands the act is not taking place, one character believes he is watching a teenage boy performing a sexual act on an older man.

“The Government cannot ban speech fit for adults simply because it may fall into the hands of children. The evil in question depends upon the actor’s unlawful conduct, conduct defined as criminal quite apart from any link to the speech in question.This establishes that the speech ban is not narrowly drawn. The objective is to prohibit illegal conduct, but this restriction goes well beyond that interest by restricting the speech available to law-abiding adults.”
In writing her dissent, Justice O’Connor writes:
“The Court concludes that the CPPA’s ban on virtual-child pornography is overbroad. The basis for this holding is unclear. Although a content-based regulation may serve a compelling state interest, and be as narrowly tailored as possible while substantially serving that interest, the regulation may unintentionally ensnare speech that has serious literary, artistic, political, or scientific value or that does not threaten the harms sought to be combated by the Government. If so, litigants may challenge the regulation on its face as overbroad, but in doing so they bear the heavy burden of demonstrating that the regulation forbids a substantial amount of valuable or harmless speech … Respondents have not made such a demonstration. Respondents provide no examples of films or other materials that are wholly computer-generated and contain images that “appea[r] to be … of minors” engaging in indecent conduct, but that have serious value or do not facilitate child abuse. Their overbreadth challenge therefore fails.

“In sum, I would strike down the CPPA’s ban on material that ‘conveys the impression’ that it contains actual-child pornography, but uphold the ban on pornographic depictions that ‘appea[r] to be’ of minors so long as it is not applied to youthful-adult pornography.”

On April 16, 1862, President Lincoln signed an act abolishing slavery in the District of Columbia, an important step in the long road toward full emancipation and enfranchisement for African Americans. 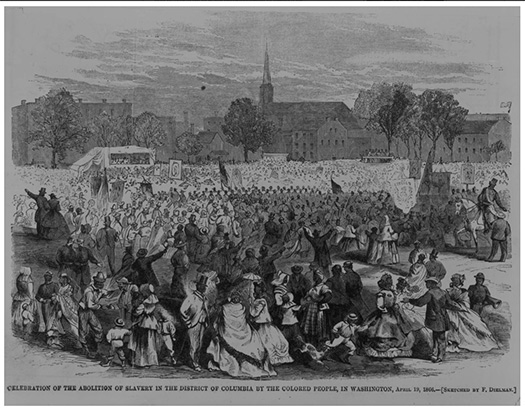 “Celebration of the Abolition of Slavery in the District of Columbia by the Colored People, in Washington, April 19, 1866.” sketched by F. Dielman; Harper’s Weekly, May 12, 1866. The African American Odyssey: A Quest for Full Citizenship.

This illustration from Harper’s Weekly depicts the fourth anniversary of the District’s Emancipation Act. On April 19, 1866, African American citizens of Washington, D.C., staged a huge celebration. Approximately 5,000 people marched up Pennsylvania Avenue, past 10,000 cheering spectators, to Franklin Square for religious services and speeches by prominent politicians. Two of the black regiments that had gained distinction in the Civil War led the procession.

Before 1850, slave pens, slave jails, and auction blocks were a common site in the District of Columbia, a hub of the domestic slave trade. In the words of one slave who worked for a time in the District’s Navy Yard:
…I generally went up into the city to see the new and splendid buildings; often walked as far as Georgetown, and made many new acquaintances among the slaves, and frequently saw large numbers of people of my color chained together in long trains, and driven off towards the South.
Charles Ball, “Fifty Years in Chains or The Life of an American Slave
External
,” 18-19, in First-Person Narratives of the American South
External
As slavery became less profitable in the border states, many traders purchased slaves and shipped them to the Deep South. In cities such as New Orleans, slaves often were resold at a higher price to cotton, rice, and indigo plantation owners. Abolitionists petitioned Congress in 1828 to abolish the District’s notorious trade. Yet, despite the efforts of John Quincy Adams and others, Congress gagged discussion of the issue for nearly 20 years.

In 1849, Illinois Congressman Abraham Lincoln attempted to introduce a bill for gradual emancipation of all slaves in the District. Although the District’s slave trade ended the following year, his emancipation attempt was aborted by Senator John C. Calhoun and others.

As president, Lincoln was better able to effect the issue. He saw slavery as morally wrong yet held it to be an institution dying under its own weight, to be abolished by voter consent. But, as commander in chief, Lincoln also realized the military expediency of emancipation. He abolished slavery in the Capital five months prior to issuing his preliminary Emancipation Proclamation. The law he signed eventually provided District slave holders compensation for 2,989 slaves.

Twenty-one years later, on April 16, 1883, Frederick Douglass spoke at a commemoration of abolition in the District. He called attention to African Americans’ continued struggle for civil rights:

It is easy to break forth in joy and thanksgiving for Emancipation in the District of Columbia, to call up the noble sentiments and the starting events which made that measure possible. It is easy to trace the footsteps of the [N]egro in the past, marked as they are all the way along with blood. But the present occasion calls for something more. How stands the [N]egro to-day? 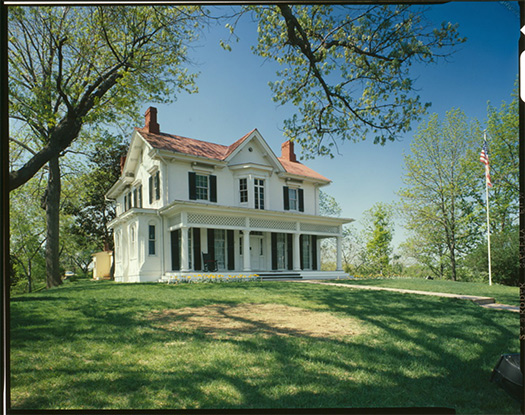