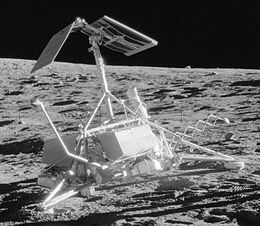 As Surveyor 3 was landing (in a crater, as it turned out [1][2]), highly reflective rocks confused the spacecraft’s lunar descent radar. The engines failed to cut off at 14 feet (4.3 meters) in altitude as called for in the mission plans, and this delay caused the lander to bounce on the lunar surface twice.[3] Its first bounce reached the altitude of about 35 feet (10 meters). The second bounce reached a height of about 11 feet (3.4 metres). On the third impact with the surface—from the initial altitude of 3 meters, and velocity of zero, which was below the planned altitude of 14 feet (4.3 meters), and very slowly descending —Surveyor 3 settled down to a soft landing as intended.

This Surveyor mission was the first one that carried a surface-soil sampling-scoop, which can be seen on its extendable arm in the pictures. This mechanism was mounted on an electric-motor-driven arm and was used to dig four trenches in the lunar soil. These trenches were up to seven inches (18 centimeters) deep. Samples of soil from the trenches were placed in front of the Surveyor’s television cameras to be photographed and the pictures radioed back to the Earth. When the first lunar nightfall came on 3 May 1967, Surveyor 3 was shut down because its solar panels were no longer producing electricity. At the next lunar dawn (after 14 terrestrial days, or about 336 hours), Surveyor 3 could not be reactivated, because of the extremely cold temperatures that it had experienced. This is in contrast with the Surveyor 1, which was able to be reactivated twice after lunar nights, but then never again.[citation needed]

Surveyor 3 became famous after the manned mission Apollo 12 used it as a landing target site. Landing within walking distance on 19 November 1969, the crew took several pictures of the probe and removed some pieces which were returned to Earth. Surveyor 3 is the only probe visited by humans on another world.

Born on August 11, 1921, in Ithaca, New York, Alex Haley was an American writer whose works, including Roots and The Autobiography of Malcolm X, centered on the struggles of African Americans. He died in Seattle, Washington, on February 10, 1992.

“Either you deal with what is the reality, or you can be sure that the reality is going to deal with you.” – Alex Haley

“The money I have made and will be making means nothing to me compared to the fact that about half of the black people I meet—ranging from the most sophisticated to the least sophisticated—say to me, ‘I’m proud of you.’ I feel strongly about always earning that and never letting black people down.” – Alex Haley

“In every conceivable manner, the family is link to our past, bridge to our future.”  – Alex Haley

Alex Haley was born Alexander Murray Palmer Haley on August 11, 1921, in Ithaca, New York. At the time of his birth, Haley’s father, Simon Haley, a World War I veteran, was a graduate student in agriculture at Cornell University, and his mother, Bertha Palmer Haley, was a teacher.

For the first five years of his life, Haley lived with his mother and grandparents in Henning, Tennessee, while his father finished his studies. When Simon Haley completed his degree, he joined the family in Tennessee and taught as a professor of agriculture at various southern universities. Alex Haley was always remarkably proud of his father, whom he said had overcome the immense obstacles of racism to achieve high levels of success and provide better opportunities for his children.

An exceptionally bright child and gifted student, Haley graduated from high school at the age of 15 and enrolled at Alcorn A&M College (Alcorn State University) in Mississippi, where he says he “was easily the most undistinguished freshman.” After one year at Alcorn, he transferred to Elizabeth City State Teachers College in North Carolina.

In 1939, at the age of 17, Haley quit school to enlist in the Coast Guard. Although he enlisted as a seaman, he quickly became a third class petty officer in the inglorious rate of mess attendant. To relieve his boredom while on ship, Haley bought a portable typewriter and typed out love letters for his less articulate friends. He also wrote short stories and articles and sent them to magazines and publishers back in the United States. Although he received mostly rejection letters in return, a handful of his stories were published, encouraging Haley to keep writing.

At the conclusion of World War II, the Coast Guard permitted Haley to transfer into the field of journalism, and by 1949 he had achieved the rank of first class petty officer in the rate of journalist. Haley was soon promoted to chief journalist of the Coast Guard, a rank he held until his retirement in 1959, after 20 years of service. A highly decorated veteran, Haley has received the American Defense Service Medal, World War II Victory Medal, National Defense Service Medal and an honorary degree from the Coast Guard Academy. A Coast Guard Cutter was also named in Haley’s honor: the USCGC Alex Haley.

for the complete article … Go to … www.biography.com/people

Connecticut became the last state in the the union (which consisted of 48 states at the time) to ratify the US Constitution’s Bill of Rights — 150 years after the list of amendments were first proposed.

Why the delay?  It certainly wasn’t because Connecticans didn’t place a high value on securing individual rights — on the contrary, Connecticut’s colonial government had codified one of the earliest set of individual rights in American history in 1650, which included protections against murder, slander, forgery, and theft.

In fact, the Connecticut General Assembly had actually voted in favor of ratifying the ten amendments back in 1789, but a procedural inconsistency between the upper and lower houses of the state legislature had prevented the vote from becoming official.  Thankfully, the General Assembly’s technical error didn’t jeopardize the adoption of the Bill of Rights.  According to the Constitution, 3/4 of the states had to approve of the amendments in order for them to become law, and that threshold had already been met by the time Connecticut would have registered its formal approval.

Guion Stewart Bluford Jr. is an American aerospace engineer, retired U.S. Air Force officer and fighter pilot, and former NASA astronaut, who is the first African American and the second person of African descent to go to space. Before becoming an astronaut, he was an officer in the U.S. Air Force, where he remained while assigned to NASA, rising to the rank of colonel. He participated in four Space Shuttle flights between 1983 and 1992. In 1983, as a member of the crew of the Orbiter Challenger on the mission STS-8, he became the first African American in space as well as the second person of African ancestry in space, after Cuban cosmonaut Arnaldo Tamayo Méndez.