On This Day in Space! April 17, 1970: Apollo 13 Returns from Aborted Moon Mission
By Hanneke Weitering 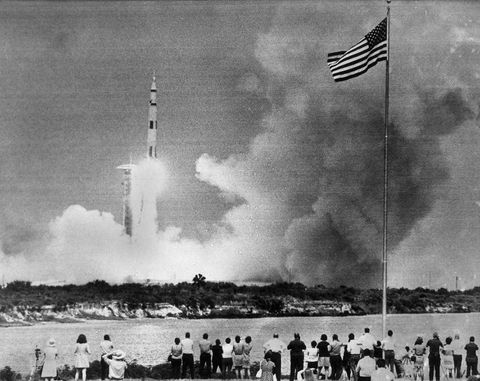 On April 17, 1970, Apollo 13 returned to Earth after narrowly avoiding a deadly disaster in space. This was supposed to be the third mission to land on the moon.

Astronauts Jim Lovell, Jack Swigert and Fred Haise launched on April 11 and were two days into their trip to the moon when an oxygen tank exploded, and NASA had to abort the mission. When the astronauts called mission control to report the incident, Swigert uttered the famous quote, “Houston, we’ve had a problem.”
With the service module running out of oxygen, they opted to use the lunar lander as a lifeboat. Because the oxygen was also used to power the spacecraft’s fuel cells, they were also running out of power. They shut down all nonessential systems and turned down the heat, and spent four cold, miserable days heading back to Earth. [NASA’s Apollo 13 Mission of Survival in Pictures]

They had to go back into the service module for reentry, and they didn’t know if their heat shield had been damaged by the explosion. Luckily they survived reentry and safely splashed down in the Pacific Ocean.

The decisions we are making in Washington state are based on one central truth: We are all in this together.

Yesterday, I joined my fellow governors in Oregon and California to commit to a shared approach toward reopening our economies that will prioritize residents’ health through decisions guided by science. And last week, I announced that the state of Washington will return more than 400 ventilators and that the field hospital at CenturyLink will be dismantled and redeployed so that states facing dire situations — like New York — can access the supplies and hospital beds needed to save countless lives.

This fight knows no state or national boundaries. The only way we will defeat this is by working together.

Make no mistake, we are still facing a serious situation here in Washington. But the data shows that our actions to slow the spread of COVID-19 have had a powerful impact. The sacrifices we’re all making are working, and this allows us to help other states who need it.

We haven’t beaten this virus yet. And to do that, all of us are going to have to stay committed to the task before us.
Together, we must remain committed to being safe and helping one another. We will continue to stay home, wash our hands, and maintain social distancing. Because of all of us, there’s hope, and hope spreads.
We’re all in this together.
Very truly yours,
Jay