So, if you’re getting your meds by mail, live in rural area, depend on the USPS for small packages, simple financial transactions , local mail carriers matter ! Demand the USPS be kept intact, the agency gets updated, their workers get PPEs and hazard pay and tear up that thing Bush/republicans forced upon USPS!

Why Immigrants Were Given Legal Status by Ronald Reagan. The Immigration Reform and Control Act of 1986 was signed into law by Ronald Reagan and allowed illegal immigrants who entered the U.S. before 1982 to be legalized.

As the nation’s attention turns back to the fractured debate over immigration, it might be helpful to remember that in 1986, Ronald Reagan signed a sweeping immigration reform bill into law. It was sold as a crackdown: There would be tighter security at the Mexican border, and employers would face strict penalties for hiring undocumented workers.

But the bill also made any immigrant who’d entered the country before 1982 eligible for amnesty — a word not usually associated with the father of modern conservatism.

In his renewed push for an immigration overhaul this week, President Obama called for Republican support for a bill to address the growing population of illegal immigrants in the country. This time, however, Republicans know better than to tread near the politically toxic A-word.

Part of this aversion is due to what is widely seen as the failure of Reagan’s 1986 Immigration Reform and Control Act. However, one of the lead authors of the bill says that unlike most immigration reform efforts of the past 20 years, amnesty wasn’t the pitfall.

“We used the word ‘legalization,’ ” former Wyoming Sen. Alan K. Simpson tells NPR’s Guy Raz. “And everybody fell asleep lightly for a while, and we were able to do legalization.”

for the complete article npr.com 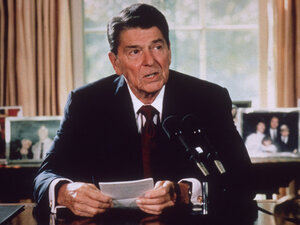 “I believe in the idea of amnesty for those who have put down roots and lived here, even though sometime back they may have entered illegally,” Ronald Reagan said in 1984.