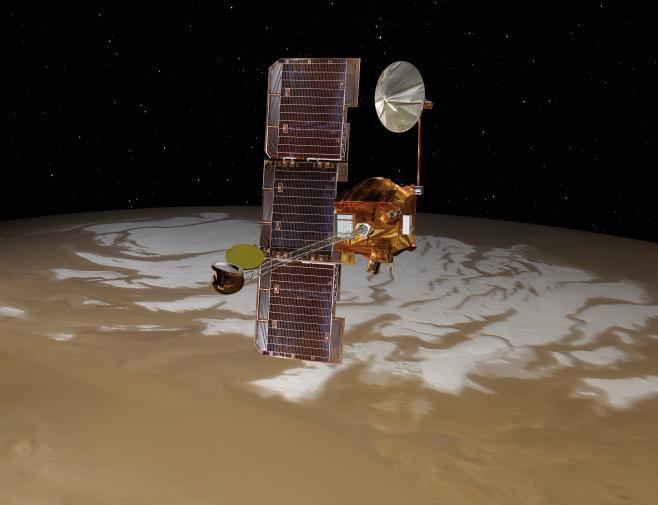 The 2001 Mars Odyssey mission is NASA’s longest-lasting spacecraft at Mars. The spacecraft launched on April 7, 2001, and arrived at Mars on October 24, 2001, 0230 Universal Time (October 23, 7:30 pm PDT/10:30 EDT). Its mission includes making the first global map of the amount and distribution of many chemical elements and minerals that make up the Martian surface. It successfully completed its primary science mission from February 2002 through August 2004. The orbiter’s extended operations continue today.
Measurements by Odyssey have enabled scientists to create maps of minerals and chemical elements and identify regions with buried water ice. Images that measure the surface temperature have provided spectacular views of Martian topography. Early in the mission, Odyssey determined that radiation in low-Mars orbit — an essential piece of information for eventual human exploration because of its potential health effects — is twice that in low-Earth orbit.
The Odyssey orbiter is a communications relay for rovers and landers on Mars including the Mars Exploration Rovers “Spirit” and “Opportunity,” the Mars Phoenix lander and the Mars Science Laboratory’s Curiosity rover. Images and other measurements from Mars Odyssey help identify potential landing sites for rovers and landers.