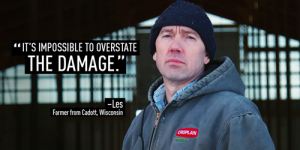 Trump’s nominees to the Federal Reserve Board are further proof that Trump’s “only the best people” mantra is complete nonsense.

The Fed is supposed to be independent and has an enormous influence on things like job growth, mortgage rates, retirement savings, and inflation—but Trump insists on trying to install completely unqualified MAGA hacks with troubling views on and history with women to oversee all of it:
• Trump’s first planned nominee, Herman Cain, withdrew from contention when it became clear that even Senate Republicans wouldn’t vote for him. Cain has been accused of sexual harassment multiple times.
• Trump’s next reported nominee, Stephen Moore, is being widely lambasted for his offensive views on women and democracy. Moore has said that he isn’t “a big believer in democracy,” and is known for making sexist statements like “Women are sooo malleable! No wonder there’s a gender gap.” Check out this thread for additional reasons why Moore is completely unfit for confirmation.

“It’s impossible to overstate the damage.”