The Supreme Court has gotten it wrong again, and it’s up to us to get Congress to fix their mistake.

In fact, Supreme Court Justice Ruth Bader Ginsburg has specifically asked us to!

In a 5-4 ruling last year, the court created an artificial distinction between types of workplace “supervisors.” This decision creates an extra hurdle for workers suing their employers for workplace harassment, unequal pay, and other forms of discrimination.

Here’s the problem: The court’s ruling doesn’t mesh with the realities of the modern workplace!

Millions of workers are overseen by other employees who don’t have the authority to hire or fire them, yet still shape their day-to-day work experience through actions such as making their schedule, giving them time off, or assigning them projects and tasks. This wrong-headed decision virtually gives a green light to sexual harassment as long as it doesn’t come from “the boss.”                                         Under the 2013 ruling, known as Vance v. Ball State University, this “overseeing” type of employee is now classified as a co-worker, meaning that any harassment from them is subject to a lesser standard – despite the obvious fact that they have power over other workers. This problematic decision is of particular concern to women – a national poll found that 25 percent of women have experienced workplace sexual harassment, as have one in 10 men.

Tell Congress: We need laws that reflect what it’s like to work in the real world.

We need the Fair Employment Protection Act, which would restore longstanding workplace protections the Vance ruling took away. We must return to a reasonable definition that reflects the modern workplace.

Think about your own experiences at work. You knew who set your schedule and gave you assignments, but did you know who could make the decision to fire you? Was it your direct boss? Was it the HR manager? Was it the company president that you met only once? Under the court’s standard, if your boss doesn’t have the power to fire you, he/she isn’t considered your “supervisor.” And that’s just silly.                                         The Fair Employment Protection Act was just introduced today, so it’s time to make your voice heard:

Tell Congress to support the Fair Employment Protection Act to protect all workers from harassment.

Today, in a huge victory for American women and their families, the Supreme Court struck down two challenged provisions of Texas’ anti-choice law with a 5-3 decision in the case Whole Woman’s Health v. Hellerstedt. The decision deemed unconstitutional the Texas law HB 2—a Targeted Regulation of Abortion Providers law, or TRAP law—aimed at limiting women’s access to safe and legal abortion by targeting clinics and providers.

The decision was the result of a challenge to politically motivated and medically unnecessary restrictions on abortion care providers that were opposed by expert organizations such as the American Medical Association and American Congress of Obstetricians and Gynecologists.

If the law had been upheld, the consequences would have been dire. At least32 of the 40 abortion clinics that existed in Texas prior to the law were expected to shut down, which would force many Texas women to drive hundreds of miles to access abortion care. What’s more, had the law been upheld, other conservative-led states would have been free to pass similar or even more extreme laws, further limiting American women’s access to abortion care to only a wealthy few.

The law was designed by Americans United for Life (AUL), an anti-abortion group that drafts model legislation for state lawmakers seeking to restrict women’s reproductive rights, and sold as a way to protect women’s health.

But, as Justice Ruth Bader Ginsburg wrote in her concurring opinion, “It is beyond rational belief that HB 2 could genuinely protect the health of women and certain that the law ‘would simply make it more difficult for them to obtain abortions.’” In fact, when asked directly during oral arguments, Texas could not identify even one woman the law would have helped receive better treatment.

The Supreme Court’s strong rebuke of Texas’ anti-choice law leaves the right to abortion on much stronger footing than it was before the decision and is a critical moment for women and families across the country. This ruling impactsmore than 20 states with TRAP laws, but far too many women and their families still face considerable obstacles to accessing comprehensive reproductive health care, especially low-income women and women of color. For example, women in Texas will have to wait months for many clinics to re-open because each clinic that was shuttered must secure new facilities, staff, and medical licenses before they can offer care again.

Anti-choice advocates across the country have created a complicated web of abortion restrictions and bans in state legislatures that prevent access to safe and affordable abortion for many women. More state abortion restrictions have been enacted in the past five years than in any other five-year period since the landmark 1973 Roe v. Wade decision. In order to ensure reproductive health access for all—including access to abortion services—lawmakers must heed the original intent of the Roe v. Wade decision and restore women’s basic legal rights.

BOTTOM LINE: Today’s Supreme Court decision is a victory for choice and a victory for women and families across the country. By rejecting Texas’ sham law intended to end safe abortion care in the state, the Court has sent a strong signal that we must reject similar efforts by politicians to interfere with medical decision-making to the detriment of women’s health. 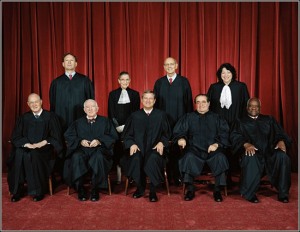 “I didn’t want to be right, but sadly I am.”-Justice Ruth Bader Ginsburg in her first interview since the Supreme Court gutted the Voting Right Act.1

In her dissent, Justice Ginsburg predicted a wave of attacks on our freedom to vote. States have rushed to implement discriminatory voting laws now that the VRA can no longer block them. North Carolina Governor Pat McCrory — who by his own admission has not even read the bill yet — is about to sign the “most sweeping anti-voter law in decades,” eliminating same day registration, cutting back on early voting, implementing a strict Voter ID requirement that does not allow student IDs, and even ending a statewide civics class that pre-registered high school students.2

Fight back against right-wing attacks on our freedom to vote. Support a constitutional amendment at FreeToVote.org

Below is the email we sent the day the Supreme Court gutted the Voting Rights Act. As I said on that day, “This is no ordinary campaign, but one that will require years of hard work to win.” Please join me and the more than 274,000 others in demanding a constitutional amendment guaranteeing the freedom to vote. Take the first step at FreeToVote.org.

The Best Responses To The Supreme Court’s Hobby Lobby Decision

It has been a week since five men sitting on the Supreme Court decided that bosses should have the right to be able to interfere with a woman’s access to affordable birth control. In the Hobby Lobby case, the majority ruled 5-4 that owners of for-profit, secular businesses who have religious objections to birth control may defy federal rules requiring that they include contraceptive care in their employees’ health plans because it violates the employer’s religious liberty rights.

The time since has seen reactions of all kinds from across the country. We’ve rounded up some of our favorites:

BOTTOM LINE: Religious liberty is the right to practice religion as you wish and the freedom to not have religion imposed on you by others, especially corporations. Despite the unfortunate ruling last week, supporters of women’s rights are already starting to fight back in creative ways.