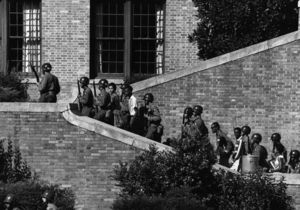 The Little Rock Nine were a group of nine black students who enrolled at formerly all-white Central High School in Little Rock, Arkansas, in September 1957.

Their attendance at the school was a test of Brown v. Board of Education, a landmark 1954 Supreme Court ruling that declared segregation in public schools unconstitutional.

1789 – The U.S. Congress passed the First Judiciary Act. The act provided for an Attorney General and a lower federal courts.

1869 – Thousands of businessmen were financially ruined after a panic on Wall Street. The panic was caused by an attempt to corner the gold market by Jay Gould and James Fisk.

1933 – “Roses and Drums” was heard on WABC in New York City. It was the first dramatic presentation for radio.

1938 – Don Budge became the first tennis player to win all four of the major titles when he won the U.S. Tennis Open. He had already won the Australian Open, the French Open and the British Open.

1957 – The Brooklyn Dodgers played their last game at Ebbets Field.

1961 – “The Bullwinkle Show” premiered in prime time on NBC-TV. The show was originally on ABC in the afternoon as “Rocky and His Friends.”

1963 – The U.S. Senate ratified a treaty that limited nuclear testing. The treaty was between the U.S., Britain, and the Soviet Union.

1977 – “The Love Boat” debuted on ABC-TV. The theme song was sung by Jack Jones and was written by Paul Williams and Charles Fox.

1995 – Three decades of Israeli occupation of West Bank cities ended with the signing of a pact by Israel and the PLO.

1996 – The United States, represented by President Clinton, and the world’s other major nuclear powers signed a Comprehensive Test Ban Treaty to end all testing and development of nuclear weapons.

2003 – Anthony Hopkins received a star on the Hollywood Walk of Fame.