Two years ago, in the final hours of his life, I sat with Troy Davis and talked with him as we fought to stop his execution. He made me promise then that, no matter the outcome, the NAACP would remain resolute in the fight against the death penalty.
Dedicate your tears to healing this world and your prayers to ending the death penalty. America must do better than this. And your deeds and actions will help get us there.
Friends : We wage this critical fight in Troy’s name. Last year, our work led to Connecticut repealing the death penalty. This year, Maryland became the first state south of the Mason-Dixon Line to do the same. Those two states now join New Jersey, New York, New Mexico, and Illinois as the fifth and sixth states in six years to abolish the death penalty.
Troy Davis’ legacy serves as a reminder that our justice system will remain broken until the death penalty is abolished across the country. Today, our community is uniting to send a powerful message on the anniversary of Troy Davis’ execution, and we want you to be a part of it.
Tweet our message using the hashtag #IamTroyDavis to support ending capital punishment in America.
Or write a message of your own.
Our message is simple: We must bring an end to this immoral, biased, and ineffective practice and the inequalities that plague our justice system.
It is appalling that the barbaric practice of capital punishment still exists in the United States. Even more so when you consider how easily a man was condemned to die in the face of overwhelming evidence pointing to his innocence.
We’re making progress, Carmen.
We must keep this miscarriage of justice in the hearts and minds of the public if we are to continue moving forward. Help by sending a tweet using the hashtag #IamTroyDavis on today’s solemn anniversary:
http://action.naacp.org/i-am-troy
Thank you,
Benjamin Todd Jealous
President and CEO
NAACP
PS: Next week, join Troy’s family on the I Am Troy Davis book tour. Visit the NAACP website for more details.

• Water, one gallon of water per person per day for at least three days, for drinking and sanitation 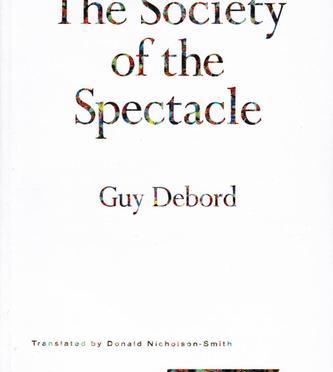 La Société du Spectacle (Society of the Spectacle) is a black and white 1973 film by the Situationist Guy Debord based on his 1967 book of the same name. It was Debord’s first feature-length film. It uses found footage and detournement in a radical criticism of mass marketing and its role in the alienation of modern society.

With the term spectacle, Debord defines the system that is a confluence of advanced capitalism, the mass media, and the types of governments who favor those phenomena: “the spectacle, taken in the limited sense of ‘mass media’ which are its most glaring superficial manifestation”.[4] The spectacle is the inverted image of society in which relations between commodities have supplanted relations between people, in which “passive identification with the spectacle supplants genuine activity”.

“The spectacle is not a collection of images,” Debord writes, “rather; it is a social relationship between people that is mediated by images.”

Debord traces the development of a modern society in which authentic social life has been replaced with its representation: “All that was once directly lived has become mere representation.”[1] Debord argues that the history of social life can be understood as “the decline of being into having, and having into merely appearing.”[2] This condition, according to Debord, is the “historical moment at which the commodity completes its colonization of social life.”[3]

In his analysis of the spectacular society, Debord notes that quality of life is impoverished,[6] with such lack of authenticity, human perceptions are affected, and there’s also a degradation of knowledge, with the hindering of critical thought.[7] Debord analyzes the use of knowledge to assuage reality: the spectacle obfuscates the past, imploding it with the future into an undifferentiated mass, a type of never-ending present; in this way the spectacle prevents individuals from realizing that the society of spectacle is only a moment in history, one that can be overturned through revolution.[8][9]

Debord’s aim and proposal is “to wake up the spectator who has been drugged by spectacular images,” “through radical action in the form of the construction of situations,” “situations that bring a revolutionary reordering of life, politics, and art”. In the situationist view, situations are actively created moments characterized by “a sense of self-consciousness of existence within a particular environment or ambience”.[10]

Debord encouraged the use of détournement, “which involves using spectacular images and language to disrupt the flow of the spectacle.”

The Society of the Spectacle is a critique of contemporary consumer culture and commodity fetishism. Before the term “globalization” was popularized, Debord was arguing about issues such as class alienation, cultural homogenization, and the mass media.

When Debord says that “All that was once directly lived has become mere representation,” he is referring to the central importance of the image in contemporary society. Images, Debord says, have supplanted genuine human interaction.[1]

Thus, Debord’s fourth thesis is: “The spectacle is not a collection of images; rather, it is a social relationship between people that is mediated by images.”[11]

In a consumer society, social life is not about living, but about having; the spectacle uses the image to convey what people need and must have. Consequently, social life moves further, leaving a state of “having” and proceeding into a state of “appearing”; namely the appearance of the image.[12]

“In a world which really is topsy-turvy, the true is a moment of the false.”[13]

Comparison between religion and marketing

Debord also draws an equivalence between the role of mass media marketing in the present and the role of religions in the past.[14][15] The spread of commodity-images by the mass media, produces “waves of enthusiasm for a given product” resulting in “moments of fervent exaltation similar to the ecstasies of the convulsions and miracles of the old religious fetishism”.[16][17]

Other observations Debord makes on religion: “The remains of religion and of the family (the principal relic of the heritage of class power) and the moral repression they assure, merge whenever the enjoyment of this world is affirmed–this world being nothing other than repressive pseudo-enjoyment.”[18] “The monotheistic religions were a compromise between myth and history, … These religions arose on the soil of history, and established themselves there. But there they still preserve themselves in radical opposition to history.” Debord defines them as Semi-historical religion.[19] “The growth of knowledge about society, which includes the understanding of history as the heart of culture, derives from itself an irreversible knowledge, which is expressed by the destruction of God.”[20]

5) 8.8 Million signed up through the Insurance Market Place

The benefits of the Affordable Care Act are pretty straightforward: the law makes it easier to get insurance you can afford, ensures you have the care you need when you get sick, and covers the preventive services you need to stay healthy for free.