Both species are iconic to Washington and a vital part of tourism, maritime industries

The bison of Montana, the alligators of Florida, the wild horses of Colorado — every state has a signature species it takes pride in.

Washington is lucky enough to have two iconic animals: orcas and salmon, whose destinies are both intertwined and in peril.

The order instructs state agencies to outline immediate steps and long-term solutions to recover these species. The order also assembles a task force to bring together state agencies, tribal leaders, local governments, federal partners and other stakeholders to make recommendations at the state, regional and federal levels.

Read the rest of the story on the governor’s Medium page. and the official Executive Order 18-02 is below 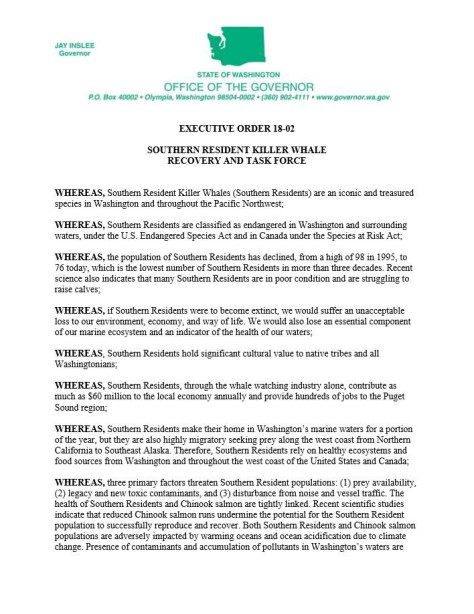 “The destiny of salmon and orca and we humans are intertwined,” the governor said at a news conference at the Daybreak Star Cultural Center in Seattle. “As the orca go, so go we.”

“This is a wake-up call,” Suquamish Tribal Chairman Leonard Forsman said, adding, “It’s going to take some pain. We’re going to have to make some sacrifices.”  also stated  below

“The orca whales are vital to our culture and spirituality as we are the first people on Puget Sound,” Forsman said. “They act as sentinels, observing our behavior and its impacts on the health of our waters. They bless us with their presence and depend on us to keep our sacred pact with the Creator to care for this beautiful land.”

“The orca dilemma is giving us a unique opportunity,” Solien said. “Our goal is to recover the orca, recover the salmon (and) improve the quality of life for everyone.”