Cyclosporiasis is an intestinal illness caused by the protozoan (unicellular) parasite Cyclospora cayetanensis. 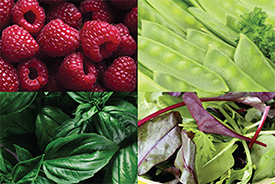 Cyclosporiasis can occur at any time of the year, but most of the reported cases and outbreaks in the United States occur during the spring and summer months, particularly from May through August. About half of all U.S. cases that are not associated with a known outbreak occur in people with a recent history of travel outside the United States and Canada.

Cyclosporiasis is acquired by eating food or drinking water that is contaminated with human feces. In the United States, cyclosporiasis outbreaks have been reported almost every year since the mid-1990s and have been associated with various types of imported fresh produce.

Symptoms of cyclosporiasis begin an average of seven days after ingestion of sporulated oocysts (eggs), the infective form of the parasite. The most common symptom is watery diarrhea. Other common symptoms include loss of appetite, nausea, abdominal cramps, weight loss, fatigue, and myalgia (muscle pain); vomiting and low-grade fever also may occur.

Cyclospora infection is diagnosed by examining stool. A special test is required to detect the parasite, so health care professionals should specifically request testing for Cyclospora. Patients might need to provide up to three stool samples collected on different days because even people who show symptoms might not shed enough oocysts in their stool to show up in laboratory testing.

So, this speech given by Lupita Nyong’o was at the Essence Magazine 7th Annual Black Women in Hollywood Luncheon in Beverly Hills, California, USA, she was honoured with the Breakthrough Performance Award. It was 2014

I had to read and re-read the speech below because she addressed my own call for People of Colour to STOP the practice of skin whitening. This practice is far from new, it has unfortunately become a billion dollar snake that needs its head cut off, a severe reprimand of those who push white is right, begin to provide services that help those who hate themselves and the skin they live in. The speech is beyond illuminating lest we say eloquent and she addressed a letter, in which she talked about a fan who wrote to her about hating her dark skin so much she had bought the controversial skin lightening cream by Dencia called Whitenicious …Lupita spoke about Dencia’s skin bleaching cream, her own issues with hating her dark skin as a teenager & more … below

I wrote down this speech, I had no time to practice so this will be the practicing session.

Thank you Alfre, for such an amazing, amazing introduction and celebration of my work. And thank you very much for inviting me to be a part of such an extraordinary community.

I am surrounded by people who have inspired me, women in particular whose presence on screen made me feel a little more seen and heard and understood. That it is ESSENCE that holds this event celebrating our professional gains of the year is significant, a beauty magazine that recognizes the beauty that we not just possess but also produce.

I want to take this opportunity to talk about beauty, Black beauty, dark beauty. I received a letter from a girl and I’d like to share just a small part of it with you: “Dear Lupita,” it reads, “I think you’re really lucky to be this Black but yet this successful in Hollywood overnight. I was just about to buy Dencia’s Whitenicious cream to lighten my skin when you appeared on the world map and saved me.”

My heart bled a little when I read those words, I could never have guessed that my first job out of school would be so powerful in and of itself and that it would propel me to be such an image of hope in the same way that the women of The Color Purple were to me.

I remember a time when I too felt unbeautiful. I put on the TV and only saw pale skin, I got teased and taunted about my night-shaded skin. And my one prayer to God, the miracle worker, was that I would wake up lighter-skinned. The morning would come and I would be so excited about seeing my new skin that I would refuse to look down at myself until I was in front of a mirror because I wanted to see my fair face first. And every day I experienced the same disappointment of being just as dark as I was the day before. I tried to negotiate with God, I told him I would stop stealing sugar cubes at night if he gave me what I wanted, I would listen to my mother’s every word and never lose my school sweater again if he just made me a little lighter. But I guess God was unimpressed with my bargaining chips because He never listened.

And when I was a teenager my self-hate grew worse, as you can imagine happens with adolescence. My mother reminded me often that she thought that I was beautiful but that was no conservation, she’s my mother, of course she’s supposed to think I am beautiful. And then…Alek Wek. A celebrated model, she was dark as night, she was on all of the runways and in every magazine and everyone was talking about how beautiful she was. Even Oprah called her beautiful and that made it a fact. I couldn’t believe that people were embracing a woman who looked so much like me, as beautiful. My complexion had always been an obstacle to overcome and all of a sudden Oprah was telling me it wasn’t. It was perplexing and I wanted to reject it because I had begun to enjoy the seduction of inadequacy. But a flower couldn’t help but bloom inside of me, when I saw Alek I inadvertently saw a reflection of myself that I could not deny.

Now, I had a spring in my step because I felt more seen, more appreciated by the far away gatekeepers of beauty. But around me the preference for my skin prevailed, to the courters that I thought mattered I was still unbeautiful. And my mother again would say to me you can’t eat beauty, it doesn’t feed you and these words plagued and bothered me; I didn’t really understand them until finally I realized that beauty was not a thing that I could acquire or consume, it was something that I just had to be.

And what my mother meant when she said you can’t eat beauty was that you can’t rely on how you look to sustain you. What is fundamentally beautiful is compassion for yourself and for those around you. That kind of beauty enflames the heart and enchants the soul. It is what got Patsey in so much trouble with her master, but it is also what has kept her story alive to this day. We remember the beauty of her spirit even after the beauty of her body has faded away.

And so I hope that my presence on your screens and in the magazines may lead you, young girl, on a similar journey. That you will feel the validation of your external beauty but also get to the deeper business of being beautiful inside.

There is no shame in Black beauty.

Lupita’s  speech  is a letter filled with humor , love and a lot of wisdom for little girls of colour from 1 – 98 who need to be taught self-love while the entertainment business needs to accept that POC come in all colours shapes sizes, speak differently and some of us don’t sing or dance, but plenty of us have great talent that should be accepted without having to make drastic changes to our features like skin whitening to get a part or a job …crossover